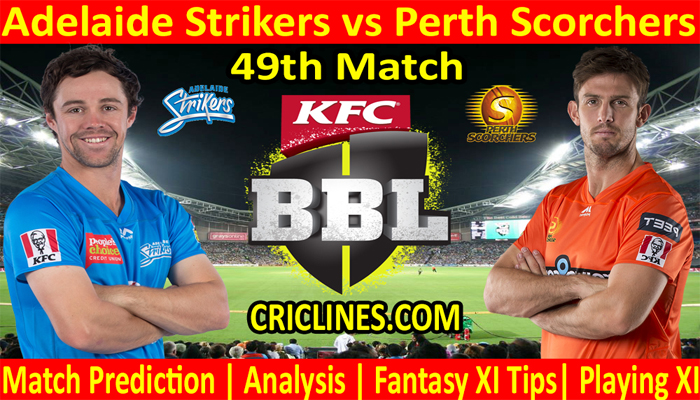 The world is ready to witness yet another big battle of BBL T20. The 49th match of Big Bash League 2021-22 is scheduled to play between Adelaide Strikers and Perth Scorchers on Friday, 14th January 2022 at Adelaide Oval, Adelaide. We are posting safe, accurate, and secure today match prediction of BBL T20 free.

Adelaide Strikers is a strong team at least on papers but they had almost failed to perform well in this edition of the Big Bash League. They had played 11 matches with just three wins to their name. They had lost eight matches and are holding the fifth position on the points table. They had three matches left and all matches are must-win for this team to have some chances to qualify for the play-off.

Adelaide Strikers are coming to this match on the back of a massive win over Brisbane Heat in their previous match with a handsome margin of 71 runs. They won the toss and decided to bat first. The way how their batting order performed in this match was just good. They scored a total of 161 runs in their inning of 20 overs. Almost all batsmen from their side put some runs on the board. Jack Weatherald was the highest run-scorer from their side who scored 35 runs. Matthew Short scored 27 runs while Henry Hunt had 25 runs to his name.

Head to Head History Between Adelaide Strikers and Perth Scorchers

Rashid Khan, Matthew Kelly, and Laurie Evans are key players to watch in this match.

The 49th match of Big Bash League 2021-22 is going to be held at Adelaide Oval, Adelaide. We had observed in the previous matches played here that the pitch here at this venue is good for batting. The track is slower than the others we have seen and helps the spinners quite a bit. We are hoping that the surface is bound to get slower and be a bit more difficult for batting in this match. A score of 185 is going to be tough to chase.