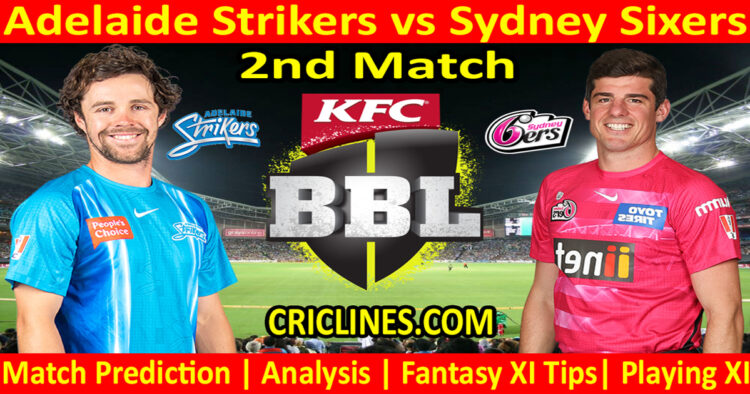 The cricket fans are ready to witness yet another big battle of BBL T20. The 2nd match of Big Bash League 2022-23 is scheduled to play between Adelaide Strikers and Sydney Sixers on Wednesday, 14th December 2022 at Adelaide Oval, Adelaide. We are posting a safe, accurate, and secure today match prediction of BBL T20.

Adelaide Strikers were not much impressive in the previous season of the Big Bash League. They could manage to win just six out of 14 league matches. They lost eight matches and were holding the fourth position on the ladder when the league matches were completed. They beat Sydney Thunder in the knockout and reached the challenger match where they were beaten by Sydney Sixers.

Sydney Sixers were the runner-up team in the previous edition of BBL. They also played 14 league matches with nine wins to their name. They lost just four matches while their one match came with no result. They were situated at the second position on the points table and moved to the qualifier match but were beaten by Perth Scorchers. They beat the same team, Adelaide Strikers in the challenger match and reached to final where they were once again beaten by Perth Scorchers by a big margin.

There are some natural changes in the squad Adelaide Strikers but they had not changed their leader and Travis Head will be leading the Strikers once again. They don’t have any big names of T20 batsmen but some good all-rounders and some young batsmen who had performed well on a domestic level. Chris Lynn is the only experienced regular batsman in the squad the Strikers. Ryan Gibson, Adam Hose, Henry Hunt, Thomas Kelly, and Jake Weatherald are the main batters of this team. Colin de Grandhomme is part of the batting squad of this team who is an experienced batting all-rounder and had played 41 T20I and 25 matches in IPL. Matthew Short is another experienced batting-all-rounder in their squad.

Alex Carey and Harry Nielsen are wicket-keeper batsmen in the squad of the Strikers. Alex Carey had played 38 T20I matches and had scored 233 runs. The bowling squad of Adelaide Strikers is stronger than the previous edition. Rashid Khan is the leading bowler of this team with Wes Agar. Rashid khan had been part of the Strikers since some previous seasons and had played the main role in each and every match. It is not easy for any best batsman in the world to score runs easily against Rashid Khan and we are sure that he will also give his best performance in this tournament. He had picked 122 wickets in just 74 T20 Internationals and 112 wickets in 92 IPL matches. Wes Agar is another experienced bowler of the Strikers and can give early breakthroughs, especially in the power play overs. Cameron Boyce, Harry Conway, Peter Siddle, and Henry Thornton are also available in the squad of the Strikers.

Sydney Sixers also had made some changes in their squad for this tournament but they also had retained the services of Moises Henriques as captain. The batting squad of Sydney Sixers is strong and experienced and some big names of the batters of T20 cricket are part of the batting squad of this team. Daniel Hughes and James Vince will be leading the batting order of the Sixers with Jordan Silk and Kurtis Patterson. Hayden Kerr is also available to handle the middle batting order with the skipper, Moises Henriques while Josh Philippe is the wicket-keeper batsman in their squad.

The bowling unit of Sydney Sixers is also strong. Sean Abbott and Daniel Christian can prove two game-changing bowlers for the Sixers. Daniel Christian had played 21 T20 International matches and picked 13 wickets. He also played a lot of matches in IPL. He had played a total of 49 IPL matches and picked 38 wickets. Steve OKeefe had played a lot of matches for the Sixers and also had played seven T20 matches for Australia. He had been good in domestic matches and we are hoping that they will perform well in this tournament. Jackson Bird and Ben Dwarshuis are two other big names in the bowling squad of Sydney Sixers. Nathan Lyon, Izharulhaq Naveed, and Chris Jordan are also part of the bowling squad of the Sixers.

Head to Head History Between Adelaide Strikers and Sydney Sixers

Chris Lynn, Rashid Khan, and Chris Jordan are key players to watch in this match.

The 2nd match of Big Bash League 2022-23 is going to be held at Adelaide Oval, Adelaide. We had observed in the previous matches played here that the pitch here at this venue is good for batting. The track is slower than the others we have seen and helps the spinners quite a bit. We are hoping that the surface is bound to get slower and be a bit more difficult for batting in this match. A score of 185 is going to be tough to chase.

We had provided you with the above-mentioned BBL T20 Prediction on the basis of our research, understanding, and analysis. These prediction tips have also based on the reports that we have from our different sources. You can consider the point we had provided you and the decision will be yours that you have to make.