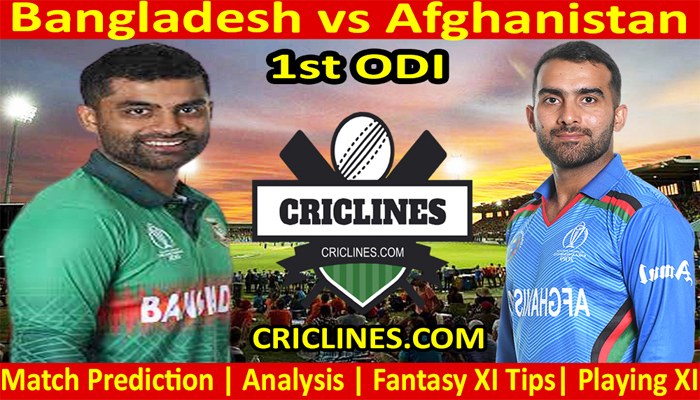 The cricket fans are ready to witness yet another big battle of ODI cricket. The 1st ODI match of Afghanistan tour of Bangladesh, 2022 is scheduled to be held on Wednesday 23rd February, 2022 at Zahur Ahmed Chowdhury Stadium, Chattogram. We are providing 100 safe, perfect, and accurate today match prediction of Bangladesh and Afghanistan.

Bangladesh and Afghanistan are going to play a series of three ODI and two T20 matches which will continue till 5th of the March, 2022. Afghanistan had played a series against Netherlands while most players of Bangladesh had been busy in BPL T20. This series is going to be very interesting as both teams are equal in strength.

Bangladesh had played its most recent ODI series against Zimbabwe where they had a white wash in the series of three ODI matches. Some key changes had been made in the squad of Bangladesh and they had given a chance to some new players. Mahmudullah was the captain of the Bangal Tigers but now Tamim Iqbal had been appointed as a new leader for this home series against Afghanistan. Najmul Hossain Shanto, Yasir Ali, and Mahmudul Hasan Joy are the leading batters of Bangladesh.

Shakib Al Hasan, Mahmudullah, Afif Hossain are batting all-rounders in the squad of Bangladesh. Liton Das and Mushfiqur Rahim are back in the team as wicket-keeper batsmen. The bowling unit of Bangladesh is experiaced and have good history in performing well in the home condititons. Mustafizur Rahman, Taskin Ahmed, Shoriful Islam, Ebadot Hossain, and Nasum Ahmed are the leading bowlers of Bangladesh.

Afghanistan ODI team was recently in Dubai where they played a series against Netherlands and Ireland. Remember that they had won recently played six ODI matches in a row. Hashmatullah Shahidi is going to lead Afghanistan in this series against Bangladesh. Ibrahim Zadran, Riaz Hussain, and Najibullah Zadran will handling the batting order of Afghanistan in this tour of Bangladesh. Rahmat Shah, Gulbadin Naib, and Mohammad Nabi are all-rounders in the squad of Afghanistan.

Afghanistan had world-class bowlers in their squad for this series. Rashid Khan had recently played in PSL from the side of Lahore Qalandars and had played key role in each and every win for the team. We will surely give tough time to the top batters of Bangladesh as it had never been easy for any batsman to score runs freely against him. Azmatullah Omarzai, Fareed Ahmad Malik, Fazalhaq Farooqi, Mujeeb Ur Rahman, Shahidullah Kamal, and Yamin Ahmadzai are the other bowlers in the ODI squad of Afghanistan.

Afghanistan had played 132 ODI matches right now with 65 wins to their name. They had lost 63 matches while their three matches was ended with no result and one match was tied.

Afghanistan had played 388 ODI matches right now with 136 wins to their name. They had lost 245 matches while their 7 matches was ended with no.

The 1st ODI match between Bangladesh and Afghanistan is going to be played at Zahur Ahmed Chowdhury Stadium, Chattogram. The pitch at this stadium is excellent for batting. The boundaries at this venue are short and will bring the spinners into play. The pitch will continue to be good for batting throughout the match.

The weather forecast in Chattogram on match day is not very good. There are some chances of rain but and that is possible that we may have an interrupted match.

Who Will Win Bangladesh vs Afghanistan 1st ODI

Who Will Win Bangladesh vs Afghanistan 1st ODI Toss-AFG

Who Will Win Bangladesh vs Afghanistan 1st ODI Match-BAN

Dream11 prediction for Bangladesh vs Afghanistan. After checking the ODI player’s availability, the Dream 11 Team for this match of Bangladesh and Afghanistan is mentioned under.