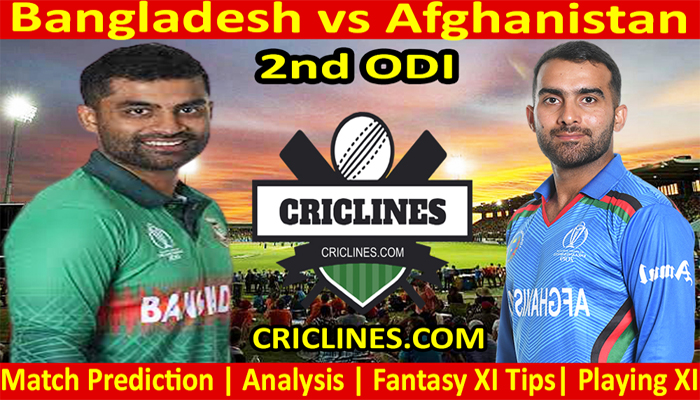 The world is ready to witness yet another big battle of ODI cricket. The 2nd ODI match of the Afghanistan tour of Bangladesh, 2022 is scheduled to be held on Friday 25th February 2022 at Zahur Ahmed Chowdhury Stadium, Chattogram. We are providing 100 safe, perfect, and accurate today match predictions of Bangladesh and Afghanistan.

As per our match prediction, Bangladesh had won the first ODI of these three matches series and now they are leading the series of ODI matches with 1-0. They have to win just one out of the remaining two matches to have the series to their name. Afghanistan gave a tough time to the home side but in the end, they were on the losing side.

Bangladesh was asked to field first after losing the toss in the opening ODI match. The way how their batting order performed in that match was just good. They leaked 215 runs in their inning of 50 overs. Mustafizur was the highest wicket-taker from their side who picked three wickets in his 9.1 overs bowled out against just 35 runs. Taskin Ahmed, Shakib Al Hasan, and Shoriful Islam picked two wickets each.

The performance of the batting order of Bangladesh was not impressive but they chased the target of 216 runs in 48.5 overs. The top and middle batting order of the Bengal Tigers totally failed but their lower order performed well. Afif Hossain was the most successful and highest run-scorer from their side who remained not out after scoring 93 runs. He faced 115 balls and smashed 11 boundaries and one huge six during his inning. Mehidy Hasan was the other batter from the Bangladesh side who performed well and scored 81 runs.

Afghanistan is a strong batting side but they failed to put a huge total on the board in the 1st ODI. They could manage to score just 215 runs while batting first. Najibullah Zadran was the most successful and highest run-scorer from their side who scored 67 runs. He faced 84 balls and smashed four boundaries and two huge sixes. Rahmat scored 34 runs while the skipper, Shahidi could manage to score 28 runs.

The performance of the bowling unit of Afghanistan was good but they could not defend a low target on the board and leaked the target of 216 runs in 48.5 overs. Fazalhaq Farooqi was the highest wicket-taker from their side who picked four wickets in his 10 overs bowled out against 54 runs. Mujeeb Ur Rahman and Rashid Khan picked one wicket each while Yamin Ahmadzai, Mohammad Nabi, and Gulbadin Naib were the bowlers who failed to pick any wicket.

Afghanistan had played 133 ODI matches right now with 65 wins to their name. They had lost 64 matches while their three matches were ended with no result and one match was tied.

Bangladesh had played 389 ODI matches right now with 137 wins to their name. They had lost 245 matches while their 7 matches were ended with no.

The 2nd ODI match between Bangladesh and Afghanistan is going to be played at Zahur Ahmed Chowdhury Stadium, Chattogram. The pitch at this stadium is excellent for batting. The boundaries at this venue are short and will bring the spinners into play. The pitch will continue to be good for batting throughout the match.

The weather forecast in Chattogram on match day is not very good. There are some chances of rain but that is possible that we may have an interrupted match.

Who Will Win Bangladesh vs Afghanistan 2nd ODI

Who Will Win Bangladesh vs Afghanistan 2nd ODI Toss-BAN

Who Will Win Bangladesh vs Afghanistan 2nd ODIMatch-BAN

Dream11 prediction for Bangladesh vs Afghanistan. After checking the ODI player’s availability, the Dream 11 Team for this match of Bangladesh and Afghanistan is mentioned under.