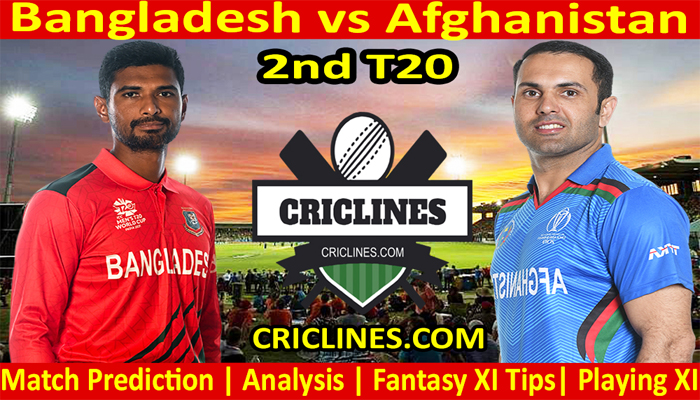 The world is ready to witness yet another big battle of T20 cricket. The 2nd T20 match of Afghanistan tour of Bangladesh, 2022 is scheduled to be held on Saturday 5th March 2022 at Shere Bangla National Stadium, Dhaka. We are providing 100 safe, perfect, and accurate today match predictions for all matches of Bangladesh and Afghanistan.

Afghanistan was unlucky in the first T20 match as it was very easy for Afghanistan to win this match but due to the worst batting performance, they lost the first T20, and now they have to win this match to avoid the whitewash and level the series. Bangladesh bounced back strongly after losing the last ODI. The performance of their batting order was not impressive but they won because of the outstanding performance by their bowling unit.

Bangladesh could manage to score 155 runs while batting first as they won the toss and decided to bat first. Liton Das, who was not in good form in the recent series and also in BPL 2022, he performed well and was the highest run-scorer with 60 runs to his name. He faced 44 balls and smashed four boundaries and two huge sixes during his inning. Afif Hossain scored 25 runs while Munim Shahriar scored 17 runs.

The way how the bowling unit of Bangladesh performed in the first t20 match was just outstanding. They defended the target of 156 runs and send the full team of Afghanistan back to the pavilion on a total of 94 runs in 17.4 overs. Nasum Ahmed was the most successful bowler who almost destroyed the batting order of Afghanistan. He picked four wickets in his four overs bowled out against just 10 runs. Shoriful Islam picked three wickets while Shakib Al Hasan picked two wickets.

Afghanistan missed a golden chance of winning the first t20 match against Bangladesh. The performance of their bowling unit was good. They leaked 155 runs in their inning of 20 overs. Fazalhaq Farooqi was the most successful bowler from their side who picked two wickets in his four overs bowled out against 27 runs. Azmatullah also picked two wickets while he was charged for 31 runs in his four overs bowled out.

The batting order of Afghanistan totally collapsed in the first t20 match. Their full team came back to the pavilion on a total of just 94 runs in 17.4 overs while chasing the target of 156 runs. Najibullah Zadran was the highest run-scorer from their side with 27 runs to his name. Azmatullah Omarzai scored 20 runs while Mohammad Nabi could manage to score 16 runs.

Afghanistan had played 90 T20 matches right now with 60 wins to their name. They had lost just 30 matches.

Bangladesh had played 124 T20 matches right now with 44 wins to their name. They had lost 78 matches while their 2 matches were ended with no result.

The 2nd T20 match between Bangladesh and Afghanistan is going to be played at Shere Bangla National Stadium, Dhaka. The pitch at this stadium is excellent for batting. The boundaries at this venue are short and will bring the spinners into play. The pitch will continue to be good for batting throughout the match.

The weather forecast in Dhaka on match day is not very good. There are some chances of rain but that is possible that we may have an interrupted match.

Who Will Win Bangladesh vs Afghanistan 2nd T20

Who Will Win Bangladesh vs Afghanistan 2nd T20 Toss-BAN

Who Will Win Bangladesh vs Afghanistan 2nd T20Match-AFG

Dream11 prediction for Bangladesh vs Afghanistan. After checking the T20 player’s availability, the Dream 11 Team for this match of Bangladesh and Afghanistan is mentioned under.