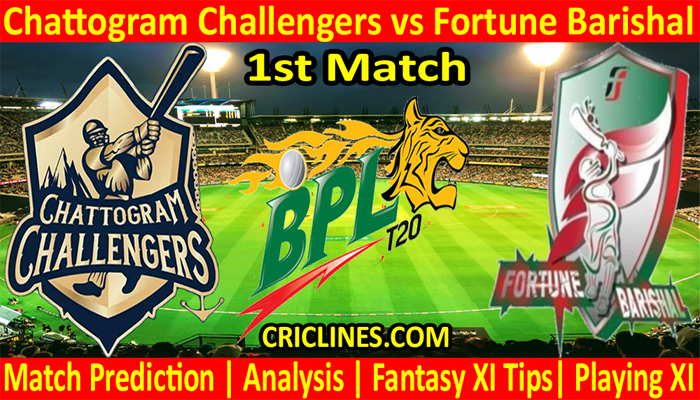 The world is ready to witness yet another big battle of T20 cricket. The 1st match of Bangladesh Premier League 2022 is scheduled to play between Chattogram Challengers and Fortune Barishal on Friday, 21st January 2022 at Shere Bangla National Stadium, Dhaka. We are posting safe, accurate, and secure today match prediction of BPL T20 free.

Chattogram Challengers had not won any title of BPL T20 while Fortune Barishal is a new addition in this tournament. We are hopeful that we will have some interesting encounters to watch during this season of BPL T20.

Chattogram Challengers had picked a balanced side for this edition of the Bangladesh Premier League. Will they have some chances to win their maiden title of BPL? a couple of early matches will answer this question. Chadwick Walton and Kennar Lewis are part of the squad of this team and we are sure that these batters will open the batting inning for the Challengers. Afif Hossain and Sabbir Rahman are international stars who will add some extra power to the batting order of this team.

Some best and most experienced players of the T20 format of cricket are part of the squad of Fortune Barishal. Dwayne Bravo and Chris Gayle are the main strength of this team. Both players had retired from international cricket but are available for league cricket. Shakib Al Hasan is another star who will be playing for Fortune Barishal.

Najmul Hossain Shanto and Nurul Hasan are star batters of Fortune Barishal while Alzarri Joseph and Obed McCoy are also available for the selection. Fortune Barishal is overall a well-balanced side who can give tough time to the other teams of this tournament.

The 1st match of BPL season 2022 is going to be held at Shere Bangla National Stadium, Dhaka. The pitch at the stadium is considered to be decent for batting but it will offer some help to the spinners like every other surface in the country. A score of around 190 should be considered par at the venue. The average first inning score on this venue is 152 runs and the average second inning score is 130 runs. This venue has the highest total recorded of 211 runs in 20 overs.

Dream11 prediction for Chattogram Challengers vs Fortune Barishal-BPL T20-1st Match. After checking the latest player’s availability, which players will be part of both teams, he possible tactics that the two teams might use as we had learned from previous seasons of BPL to make the best possible Dream11 team.