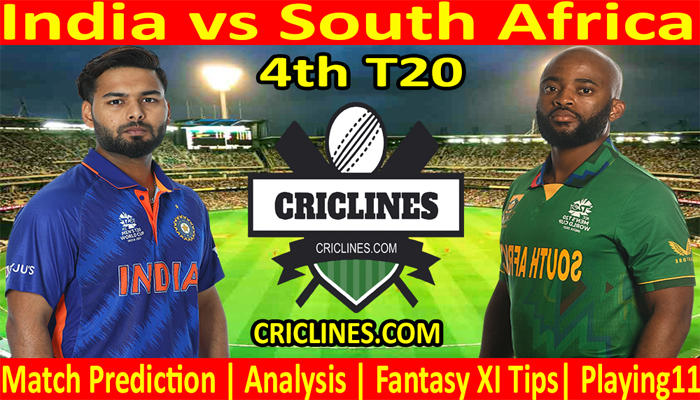 The world is ready to witness yet another big battle of T20 cricket. The 4th T20 match of the South Africa tour of India, 2022 is scheduled to be held on Friday, 17th June 2022 at Saurashtra Cricket Association Stadium, Rajkot. We are providing 100 safe, perfect and accurate today match prediction of India and South Africa.

India had finally won a T20 match against South Africa after losing two matches in a row. They were with the bat and ball in the third match. They scored a total of 179 runs in 20 overs while batting first and their bowling department also performed well and defended the target of 180 runs. On the other side, the South African team relaxed in the third match after winning two early matches. They failed to perform well in each and every department of the game. Their bowling department could not perform well and their batting order also collapsed. Two matches are left in this series of five matches where South Africa has to win just one match to win this series against India.

India must happy with their performance in the third T20 match. They also have good news as their star players like Ishan Kishan, Ruturaj Gaikwad, and Hardik Pandya are back to good form. Ruturaj Gaikwad and Ishan Kishan opened the batting inning for India and provided a good opening start of 97 runs for the partnership of the first wicket. Ruturaj Gaikwad was the highest run-scorer with 57 runs to his name on 35 balls with the help of seven boundaries and two huge sixes. Ishan Kishan also had an outstanding performance with the bat. He scored 54 runs at the strike rate of 154 and smashed five boundaries and two huge sixes during his inning. Hardik Pandya remained not out after scoring 31 runs on just 21 balls with the help of four boundaries. Shreyas Iyer, Rishabh Pant, and Karthik could not give the best performance.

The bowling department of India was just superb in the third match. They defended the target of 180 runs and send the full team of South Africa back to the pavilion in 19.1 overs on a total of just 131 runs. India came into this match with its full strength. Bhuvneshwar Kumar, Avesh Khan, Axar Patel, Yuzvendra Chahal, and Harshal Patel were leading the bowling department of India in the previous match. Harshal Patel was the highest wicket-taker in the previous match with four wickets to his name in 3.1 overs against just 25 runs. Yuzvendra Chahal picked three wickets while he was charged for 20 runs in four overs. Axar Patel and Bhuvneshwar Kumar picked one wicket each while Avesh Khan was the only bowler from the side of India who could not manage to pick any wicket.

South Africa lost the third T20 match of this tour of India after winning two opening matches. They were not serious about the game in the third match. Kagiso Rabada, Wayne Parnell, Tabraiz Shamsi, Anrich Nortje, Keshav Maharaj, and Dwaine Pretorius were the leading bowlers of South Africa in the third match but none of these bowlers could stop the batting order of India from scoring the runs. Pretorius picked two wickets in four overs and bowled out while he was charged for 29 runs. Shamsi, Maharaj, and Rabada picked one wicket each while Nortje and Parnell were the bowlers who could not pick any wicket in the previous match.

The batting order of South Africa also collapsed in the previous match against India. They could manage to score just 131 runs and their full team came back to the pavilion in 19.1 overs while chasing the target of 180 runs. Heinrich Klaasen was the highest run-scorer with just 29 runs to his name on 24 balls with the help of three boundaries and one huge six. Reeza Hendricks scored 23 runs while Wayne Parnell could manage to score 22 runs and remained not out. Dwaine Pretorius scored 20 runs. South Africa had been an unpredictable team on this tour of India. We are sure that they will bounce back strongly after losing the previous match. This match is going to be very interesting.

India had played a total of 162 T20 matches so far. They won 105 matches while other teams won 53 matches. 4 matches for India were ended with no result.

South Africa had played 150 T20 matches right now with 88 wins to their name while they had lost 61 matches. Their one match was ended with no result.

The 4th T20 Match match between India and South Africa is going to be played at Saurashtra Cricket Association Stadium, Rajkot. The pitch at this stadium is excellent for batting. The boundaries at this venue are short and will bring the spinners into play. The pitch will continue to be good for batting throughout the match. A total of 190 can be dificult for batting second to chase.

The weather forecast in Rajkot on match day is good for a cricket match. There are some chances of rain but and that is possible that we may have an intruppted match.

Who Will Win India vs South Africa 4th T20 Match

We had provided you with the above-mentioned today prediction on the basis of our research, understanding, and analysis. You can consider the point we had provided you and in the end, the final decision will be yours that you have to make.