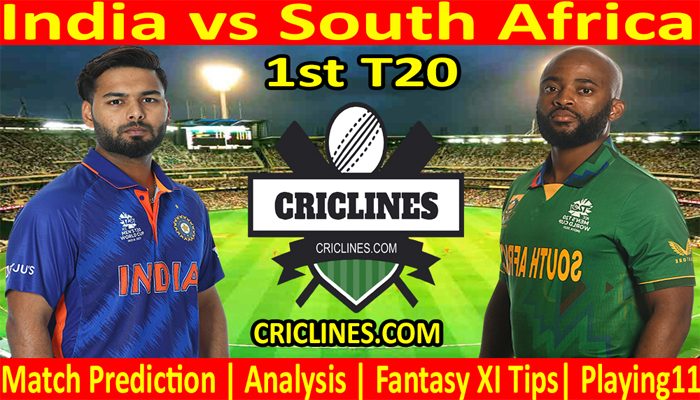 The cricket fans are ready to witness yet another big battle of T20 cricket. The 1st T20 match of the South Africa tour of India, 2022 is scheduled to be held on Thursday, 9th June 2022 at Arun Jaitley Stadium, Delhi. We are providing 100 safe, perfect, and accurate today match prediction of India and South Africa.

India had played an ODI and a Test series against South Africa during this year. South Africa was good in that series even though they lost. Now they are going to face India in the series of five T20 matches. India will play this home series without their star players but still, they are a dangerous side, especially at their home grounds. India got some talented players in the recent edition of the Indian Premier League and they also had given a chance to some of the young and talented players. South Africa will play this series with its full strength and we are sure that they will give us a tough time in India.

Most players of team India had been busy in IPL and they had played a lot of cricket in the previous two months. Some of the key players of India also got injuries and that is the reason why they are not part of the national team for this home series against South Africa. KL Rahul is the backbone of the batting order of team India who will not play some opening matches of this series and it means that we will see a new opening pair for the batting of India. We think that Ishan Kishan and Ruturaj Gaikwad will open the batting inning for India. Suryakumar Yadav is also not available for this match and it means that some youngsters of India will make comeback in this match.

Dinesh Karthick is the player who will join the national team in this match with Yuzvendra Chahal. Yuzvendra Chahal was good in the IPL with the ball and even with the bat. Shreyas Iyer is the other player who is available in the squad of India for this series. Deepak Hooda and Hardik Pandya are also back in team India. Kuldeep Yadav, Ravi Bishnoi, Bhuvneshwar Kumar, Harshal Patel, Avesh Khan, Arshdeep Singh, and Umran Malik will be taking care of the bowling department of team India. Umran Malik was just outstanding in IPL 2022 with the ball. He was the highest wicket-taker from the side of his team and also have a good pace and speed. We are sure that he will get a chance in the final playing eleven for this match.

This tour of India is part of the preparations for the ICC World T20 2022. South Africa had decided to go in this series of five matches with their main and full strength. After this tour, South Africa will also have a tour of Australia and this series had become very important for RSA. They will try their best to win some matches from here and get some kind of momentum for the important tour to Australia. South also had called some of its experienced players for this series. Wayne Parnell is one of these players. Temba Bavuma is the regular leader of South Africa and he will also lead the side on this tour of India and even Australia.

India had played a total of 159 T20 matches so far. They won 104 matches while other teams won 51 matches. 4 matches for India were ended with no result.

South Africa had played 147 T20 matches right now with 86 wins to their name while they had lost 60 matches. Their one match ended with no result.

India had played 15 T20 matches against South Africa where they won 9 matches while South Africa had won 6 matches.

The 1st T20 Match match between India and South Africa is going to be played at Arun Jaitley Stadium, Delhi. The pitch at this stadium is excellent for batting. The boundaries at this venue are short and will bring the spinners into play. The pitch will continue to be good for batting throughout the match. A total of 190 can be difficult for batting second to chase.

The weather forecast in Delhi on match day is good for a cricket match. There are some chances of rain but that is possible that we may have an interrupted match.

Who Will Win India vs South Africa 1st T20 Match

Dream11 prediction for India vs South Africa. After checking the latest player’s availability, the Dream 11 Team for this match between India and South Africa is mentioned under.