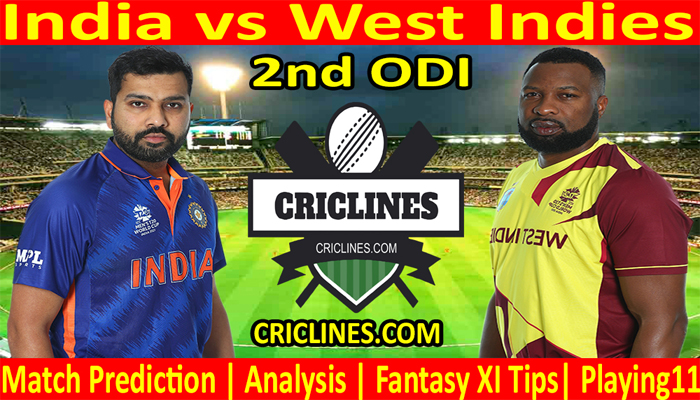 The cricket fans are ready to witness yet another big battle of ODI cricket. The 2nd ODI match of India tour of West Indies, 2022 is scheduled to be held on Wednesday, 9th February 2022 at Narendra Modi Stadium, Ahmedabad. We are providing 100 safe, perfect, and accurate today’s match prediction for all matches of India and the West Indies.

West Indies had lost the opening match of these three matches and now they have to win next both matches to save the series. India was the favorite to win this home series and they had a good stat as they had won the first match and are now leading the series.

India had played a total of 1000 ODI matches so far. They won 519 matches while other teams won 431 matches. 41 matches of India were ended with no result and 9 matches were tied.

West Indies had played 836 ODI matches right now with 406 wins to their name while they had lost 390 matches. Their 30 matches were ended with no result and 10 matches were tied.

India had played 134 ODI matches against West Indies where they won 65 matches while West Indies had won 63 matches. Two matches between these two teams were tied and four matches were ended with no result.

The 2nd ODI Match match between India and West Indies is going to be played at Narendra Modi Stadium, Ahmedabad. The pitch at this stadium is excellent for batting. The boundaries at this venue are short and will bring the spinners into play. The pitch will continue to be good for batting throughout the match. A total of 290 can be difficult for batting second to chase.

India won the toss and decided to field first in the opening match. The way how their bowling unit performed in the first match was just outstanding. They leaked 176 runs and sent a full team of West Indies back to the pavilion in 43.5 overs. Chahal was the most successful and highest wicket-taker with four wickets to his name. Washington Sundar picked three wickets while Prasidh Krishna had two wickets to his name.

The batting order of India also performed well and chased the target of 177 runs in 28 overs. The skipper, Rohit Sharma was the highest run-scorer who scored 60 runs on 51 balls. He smashed 10 boundaries and one huge six during his inning. Suryakumar Yadav scored 34 runs while Ishan Kishan could manage to score 28 runs. Deepak Hooda remained not out after scoring 26 runs.

The batting order of West Indies is strong and experienced but they failed to put a massive total on the board and their full team came back to the pavilion in 43.5 overs after scoring just 176 runs. Jason Holder was the only batter from their side who put some big runs on the board. He scored 57 runs with the help of four boundaries. Fabian Allen scored 29 runs.

The bowling unit of West Indies failed to defend a low target on the board and leaked the target of 177 runs in 28 overs. Alzarri Joseph was the most successful and highest wicket-taker from their side who picked two wickets in his seven overs bowled out against 45 runs. Akela Hosein picked one wicket while Kemar Roach, Jason Holder, and Fabian Allen failed to pick any wicket.

The weather forecast in Ahmedabad on match day is not very good. There are some chances of rain but that is possible that we may have an interrupted match.

Who Will Win India vs West Indies 2nd ODI Match