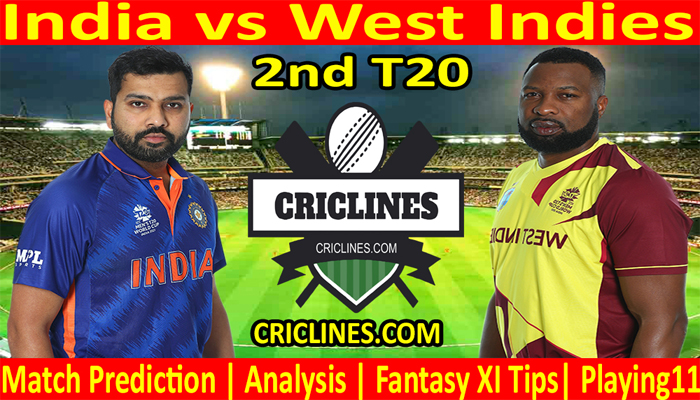 The cricket fans are ready to witness yet another big battle of T20 cricket. The 2nd T20 match of West Indies tour of India, 2022 is scheduled to be held on Friday, 18th February 2022 at Eden Gardens, Kolkata. We are providing 100 safe, perfect and accurate today match prediction for the all matches of India and West Indies.

West Indies had faced a white wash in the ODI series and also had lost the opening T20 match by the margin of six wickets. Can they avoid the white wash in the T20 series? the time will tell this. On the other side, India had been just outstanidng in this home series against West Indies. They had won the ODI series and also has a golden chance to win remainging both T20 matches.

India saw some key changes in team India for the first T20 match. Ravi Bishnoi was given a chance in the middle overs to bowl while Yuzvendra Chahal was also used in the middle and last overs freely. Venkatesh Iyer was the other player who was given free hand in the opening overs with Rohit Sharma. Ravi Bishnoi was the most successful bowler with two wickets to his name. He bowled out four overs and leaked just 17 runs.

Harshal Patel also picked two wickets while he was charged for 37 runs in his four overs bowled out. Bhuvneshwar Kumar, D Chahar, and Chahal picked one wicket each. Rohit Sharma was the highest run-scorer from their side with 40 runs to his name. Ishan Kishan scored 35 runs while Suryakumar Yadav remained not out after scoring 34 runs.

West Indies had been under pressure throughout this tour of India. They could not play well in the ODI series and also we saw in the first T20 match. The change in strategy also had affected the performance of West Indies. We saved their power hitter for the last overs but this formula did not work properly.

Nicholas Pooran was the highest run-scorer in the first T20 with 61 runs to his name. He faced 43 balls and smashed four boundaries and five huge sixes during his inning. K Mayers scored 31 runs. They leaked the target of 158 runs in 18.5 overs. Roston Chase was the most successful bowler from their side with two wickets to his name. He bowled out four overs and leaked just 14 runs. Sheldon Cottrell and Fabian Allen picked one wicket each.

India had played a total of 154 T20 matches so far. They won 99 matches while other teams won 51 matches. 4 matches of India were ended with no result.

West Indies had played 158 T20 matches right now with 68 wins to their name while they had lost 81 matches. Their 9 matches were ended with no result.

India had played 18 T20 matches against West Indies where they won 11 matches while West Indies had won 6 matches. One match between these two teams was ended with no result.

The 2nd T20 Match match between India and West Indies is going to be played at Eden Gardens, Kolkata. The pitch at this stadium is excellent for batting. The boundaries at this venue are short and will bring the spinners into play. The pitch will continue to be good for batting throughout the match. A total of 190 can be difficult for batting second to chase.

The weather forecast in Kolkata on match day is not very good. There are some chances of rain but that is possible that we may have an interrupted match.

Who Will Win India vs West Indies 2nd T20 Match