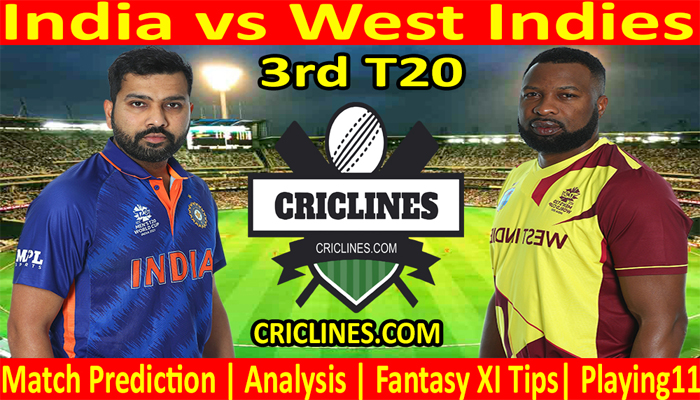 The world is ready to witness yet another big battle of T20 cricket. The 3rd T20 match of India tour of West Indies, 2022 is scheduled to be held on Sunday, 20th February 2022 at Eden Gardens, Kolkata. We are providing 100 safe, perfect, and accurate today match predictions of India and the West Indies.

Venkatesh Iyer scored 33 runs. The performance of the bowling unit of India was not impressive but they defended the target of 187 runs and leaked 178 runs in their inning of 20 overs. Ravi Bishnoi, Yuzvendra Chahal, and Bhuvneshwar Kumar picked one wicket each while Deepak Chahar and Harshal Patel were the bowlers who failed to pick any wicket.

West Indies bounced back in the previous match but failed to win against India. Their bowling unit leaked plenty of runs. They leaked 186 runs in their 20 overs inning. Roston Chase was the most successful and highest run-scorer from their side who picked three wickets in his four overs bowled out against 25 runs. Cottrell and Romario Shepherd picked one wicket each.

The batting order of West Indies performed well but they failed to chase the target of 187 runs and scored 178 runs in their 20 overs inning. Rovman Powell was the most successful and highest run-scorer from their side who scored 68 runs on 38 deliveries with the help of four boundaries and five huge sixes. Nicholas Pooran also performed well and scored 62 runs. He faced 41 balls and smashed five boundaries and three huge sixes during his inning.

India had played a total of 155 T20 matches so far. They won 100 matches while other teams won 51 matches. 4 matches of India were ended with no result.

West Indies had played 159 T20 matches right now with 68 wins to their name while they had lost 82 matches. Their 9 matches were ended with no result.

India had played 19 T20 matches against West Indies where they won 12 matches while West Indies had won 6 matches. One match between these two teams was ended with no result.

The 3rd T20 Match match between India and West Indies is going to be played at Eden Gardens, Kolkata. The pitch at this stadium is excellent for batting. The boundaries at this venue are short and will bring the spinners into play. The pitch will continue to be good for batting throughout the match. A total of 190 can be difficult for batting second to chase.

The weather forecast in Kolkata on match day is not very good. There are some chances of rain but that is possible that we may have an interrupted match.

Who Will Win India vs West Indies 3rd T20 Match