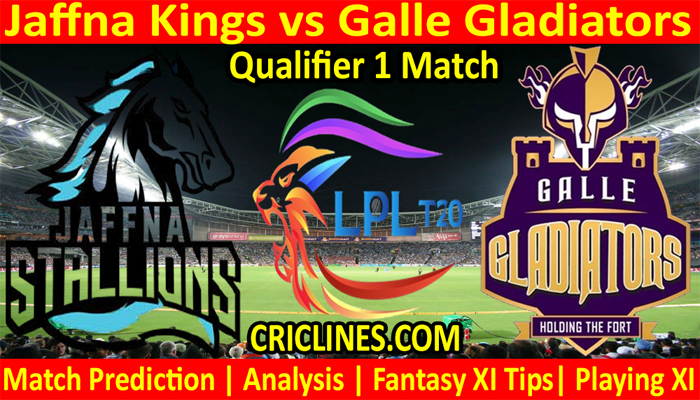 The cricket fans are ready to witness yet another big battle of the Lanka Premier League. Qualifier 1 of LPL T20 is scheduled to play between Jaffna Kings and Galle Gladiators on Sunday, 19th December 2021 at R.Premadasa Stadium, Colombo. We are posting safe, accurate, and 100% secure today match prediction of LPL T20.

Jaffna Kings is the best performing team of this second edition of Lanka Premier League. They had won six out of eight matches played at the league stage. They lost just two matches are leading the points table after the league stage matches had been ended.

Galle Gladiators had a kick start to this season of LPL and won their early matches. They lost some matches in the middle of this tournament. After the end of the league stage matches, they are holding the 2nd position on the points table. They had won four out of eight matches played at the league stage. They had lost three matches while their one match was ended with no result.

Jaffna Kings were beaten by the same team, Galle Gladiators in their most recent match by the margin of 20 runs. They lost the toss and were asked to field first. The performance of their bowling unit was good. They leaked just 129 runs in their 20 overs inning. V Viyaskanth was the most successful and highest wicket-taker from their side who picked two wickets in his four overs bowled out against 21 runs.

Praveen Jayawickrama and Wahab Riaz also picked one wicket each in the previous match while Shoaib Malik had one wicket to his name. Jaffna Kings lost the previous match due to the worst performance by their batting order. They failed to chase the target of 130 runs and scored just 109 runs. Their whole team came back to the pavilion in 18.3 overs. Shoaib Malik was the highest run-scorer with 23 runs to his name. Rahmatullah Gurbaz scored 21 runs while Ashen Bandara could manage to score 18 runs. No other bowler from their side could even enter into a double-figure.

Galle Gladiators is coming to this match on the back of a massive win over Jaffna Kings with a margin of 20 runs. They won the toss and decided to bat first. The batting order of this team totally failed to put a big total on the board. They could manage to score just 129 runs in their 20 overs inning. The skipper, B Rajapaksa was the most successful batter from their side who scored 23 runs. Danushka Gunathilaka scored 19 runs.

The way how the bowling unit of Galle Gladiators performed in the previous match was just outstanding. They defended the target of 130 runs and send the whole team of Jaffna Kings back to the pavilion on a total of 109 runs in 18.3 overs. Noor Ahmad was the most successful bowler from their side who picked two wickets in his four overs bowled out against just 12 runs. Samit Patel also picked two wickets while Mohammad Amir, Mohammad Hafeez, and Sahan Arachchige picked one wicket each.

Jaffna Kings is full of experianced and young players of the t20 foramt. The batting order of this team is also strong and some well known hitter of t20 format are the part of the squad of this team, so the winning chances of today match for Jaffna Kings have been increased. The equation of who will win today cricket match prediction and who will win the cricket match today is mentioned as under.

The toss is going to play an important in the result of each and every match of LPL T20 as we had observed in the previous matches. According to our toss prediction, the team who will win the toss will elect to bat first as chasing had been dificult in the most recent matches of LPL.

The Qualifier 1 of Lanka Premier League is going to be help at the R.Premadasa Stadium, Colombo. We had observed in the previous matches played here that the pitch here at this venue is good for batting. The track is slower than the others we have seen and helps the spinners quite a bit. We are hoping that the surface is bound to get slower and be a bit more difficult for batting in this match. A score of 185 is going to be tough to chase.

The weather forecast for Colombo is good this cricket match. There are almost no chances of rain in the region and we are hopeful that we will have a full match to enjoy.

Dream11 fantasy team lineup prediction for Jaffna Kings vs Galle Gladiators Qualifier 1 LPL 2021. After checking the latest players availibity, which players will be part of the both teams, he possible tactics that the two teams might use as we had leaned rom previous seasons of Lanka Premier League to make the best possible Dream11 team.