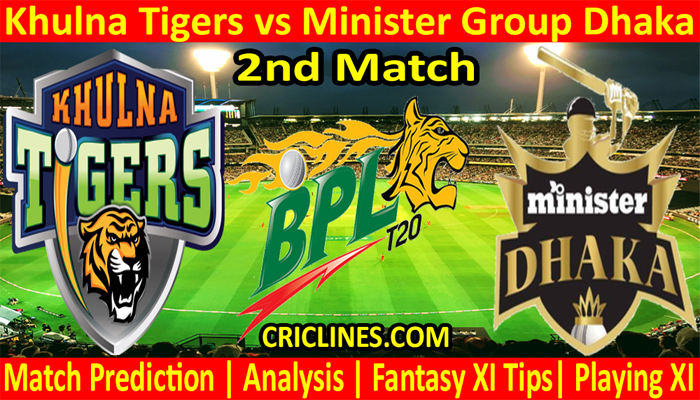 The cricket fans are ready to witness yet another big battle of T20 cricket. The 2nd match of Bangladesh Premier League 2022 is scheduled to play between Khulna Tigers and Minister Group Dhaka on Friday, 22nd January 2022 at Shere Bangla National Stadium, Dhaka. We are posting safe, accurate, and secure today match prediction of BPL T20 free.

After the gap of a long time, some T20 leagues are set to star. BBL is in the stage of playoff and we have two new leagues who are going to start. BPL is starting from today with a doubleheader while PSL will start in the time of a week.

Khulna Tigers had picked a strong team for this edition of BPL T20. Some best batter, all-rounders, and bowlers of the shorter format of cricket are part of the squad of this team. Remember that they had never won the title of BPL and if we have a deep look at the squad of this team, we can hope that they will change the history. Mushfiqur Rahim is the new captain of the Tigers while Lance Klausner had been appointed as a coach.

Rony Talukder, Andre Fletcher, Yasir Ali, and Mushfiqur Rahim had done well in the recent matches they had played and we are sure that these players will continue good form in this tournament. Some senior players like Mahedi Hasan, Sikandar Raza, Thisara Perera, and Seekkuge Prasanna are also available in the squad of Khulna Tigers.

Dhaka Platoon is taking part in this tournament with a new name, Minister Group Dhaka. With the name change, they also had changed their squad and some members of team management. Mahmudullah is going to lead this team in this edition of BPL. Captain Mahmudullah, Tamim Iqbal, and Mashrafe Mortaza are the key strength of Dhaka.

Shamsur Rahman, Jaharul Islam, and Mohammad Naim are also available for the selection of the final playing eleven for this match. Qais Ahmed, Fazal Haq Farooqi, Najib Zadran, and Mohammad Shahzad are also part of the squad of this team. The trump card of this team of Andre Russell and we all know that he can change the game at any stage of the match.

The 2nd match of BPL season 2022 is going to be held at Shere Bangla National Stadium, Dhaka. The pitch at the stadium is considered to be decent for batting but it will offer some help to the spinners like every other surface in the country. A score of around 190 should be considered par at the venue. The average first inning score on this venue is 152 runs and the average second inning score is 130 runs. This venue has the highest total recorded of 211 runs in 20 overs.

Dream11 prediction for Khulna Tigers vs Minister Group Dhaka-BPL T20-2nd Match. After checking the latest player’s availability, which players will be part of both teams, he possible tactics that the two teams might use as we had learned from previous seasons of BPL to make the best possible Dream11 team.