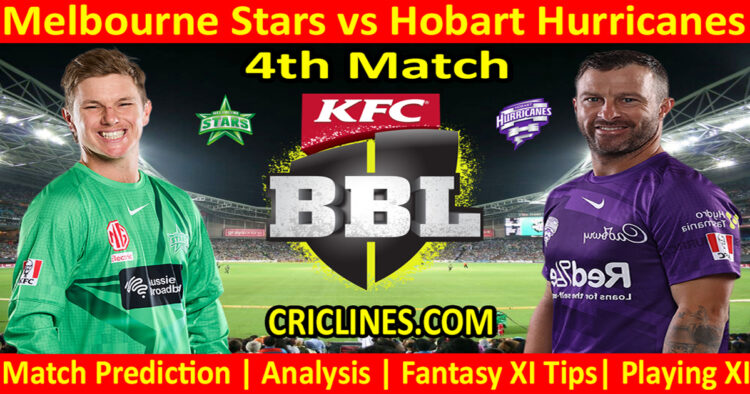 The cricket fans are ready to witness yet another big battle of BBL T20. The 4th match of Big Bash League 2022-23 is scheduled to play between Melbourne Stars and Hobart Hurricanes on Friday, 16th December 2022 at Melbourne Cricket Ground, Melbourne. We are posting safe, accurate, and secure today match prediction of BBL T20.

Hobart Hurricanes are playing their very first match of this tournament. The performance of was average in the previous edition of the Big Bash League. They played 14 league matches with just seven wins to their name. They lost seven matches and were holding the fifth position on the ladder.

The first match of Melbourne Stars was a low-scoring match where they put up a good fight. Melbourne Stars had tested its first playing eleven and now will be in a better position to get the best playing eleven for this match. They lost the toss and were asked to bat first but their batting order failed to put a handsome total on the board and scored just 122 runs in 20 overs. Nick Larkin was the highest run-scorer from their side with just 25 runs to his name. He faced 26 balls and smashed just one boundary. Joe Burns was retd hurt after scoring 18 runs. Coulter-Nile scored 15 runs while Tom Rogers could manage to score 14 runs. Hilton Cartwright could manage to score just 12 runs.

Hobart Hurricanes had retained Matthew Wade as their captain but had made some regular changes in their squad for this edition of Big Bash League. They had added some extra strength to their batting order. D Arcy Short, Asif Ali, and Tim David are key batsmen of this team. D Arcy Short had played 23 T20 International matches and scored 642 runs with a strike rate of 118.89. Asif Ali is a hard hitter and had played 55 T20 matches for Pakistan. He had scored 544 runs with a good strike rate of near about 134. Tim David also has good T20 Stats. He had scored 611 runs in 22 matches with a strike rate of 159.11. He also had played nine matches in IPL where his strike rate of more than 200 which is awesome. Zak Crawley and Macalister Wright are also part of the batting squad of the Hurricanes.

Ben McDermott and Matthew Wade are wicketkeepers in the squad of Hobart Hurricanes. The bowling unit of this team is not much stronger for this season of the Big Bash League. They had picked Faheem Ashraf as a bowling all-rounder. He had played a lot of matches on an international level for Pakistan. He also has experience playing in Pakistan Super League. Faheem Ashraf scored 202 runs in 29 T20 innings with a strike rate of 128 and he also picked up 35 wickets in 41 T20 innings. Nathan Ellis is the leading bowler of the Hurricanes. He also has played some T20 International matches and had been a part of this team in some previous seasons. Riley Meredith and Joel Paris are also part of the bowling squad of this side. Billy Stanlake, Patrick Dooley, and Chris Tremain are also available for the selection of the final playing eleven of this match.

Nathan Coulter-Nile, Trent Boult, and Asif Ali are key players to watch in this match.

The 4th match of Big Bash League 2022-23 is going to be held at Melbourne Cricket Ground, Melbourne. We had observed in the previous matches played here that the pitch here at this venue is good for batting. The track is slower than the others we have seen and helps the spinners quite a bit. We are hoping that the surface is bound to get slower and be a bit more difficult for batting in this match. A score of 185 is going to be tough to chase.