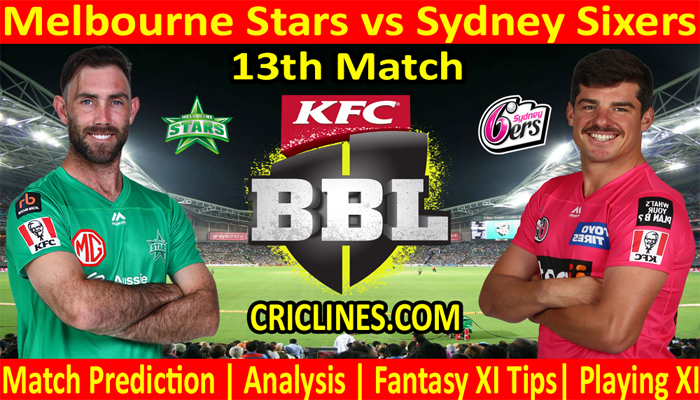 The world is ready to witness yet another big battle of BBL T20. The 13th match of Big Bash League 2021-22 is scheduled to play between Melbourne Stars and Sydney Sixers on Wednesday, 15th December 2021 at Melbourne Cricket Ground, Melbourne. We are posting safe, accurate, and secure today match prediction of BBL T20 free.

Melbourne Stars had performed well in this tournament so far. They had played three matches with two wins to their name. They had lost one match and are holding the 3rd position on the points table.

Sydney Sixers is the best performing team of this edition of Big Bash League. They also had played three matches. They had won two matches and lost one match. They are equal in the points with Perth Scorchers and Melbourne Stars but their net run rate is best among all teams which are +2.103.

Melbourne Stars had got the services of their key players which had added extra strength to this team. Nathan Coulter-Nile and Marcus Stoinis had joined this team while they also had added Andre Russell to their squad. We had seen the results after adding these players. Melbourne Stars had won their both previously played matches. These wins must boost the confidence of this team and we are sure that they will get better results in un coming matches of this season of Big Bash League.

Hilton Cartwright, Andre Russell, Glenn Maxwell, Joe Clarke, Nick Larkin, and Marcus Stoinis are part of the squad of Melbourne Stars which makes the batting order of this team very strong especially Andre Russell who has the power-hitting capability and can be dangerous in the last overs. The bowling unit of this team is not strong as their batting order and we had observed this in the previously played matches. Adam Zampa is the only world-class bowler and they are using Andre Russell and Nathan Coulter-Nile as part-time bowlers.

Sydney Sixers had started their campaign in this tournament like champions and won both opening matches of this edition of BBL. They had lost their most recent match against Hobart Hurricanes in a rain-affected match but we can’t say this team will be under pressure in this match. The bowling unit of the Sixers totally failed to give the best performance in the previous match but they have the capability to bounce back strongly.

Head to Head History Between Melbourne Stars and Sydney Sixers

Andre Russell, Moises Henriques, and Glenn Maxwell to watch in this match.

The 13th Match match of Big Bash League 2021-22 is going to be held at Melbourne Cricket Ground, Melbourne. We had observed in the previous matches played here that the pitch here at this venue is good for batting. The track is slower than the others we have seen and helps the spinners quite a bit. We are hoping that the surface is bound to get slower and be a bit more difficult for batting in this match. A score of 185 is going to be tough to chase.