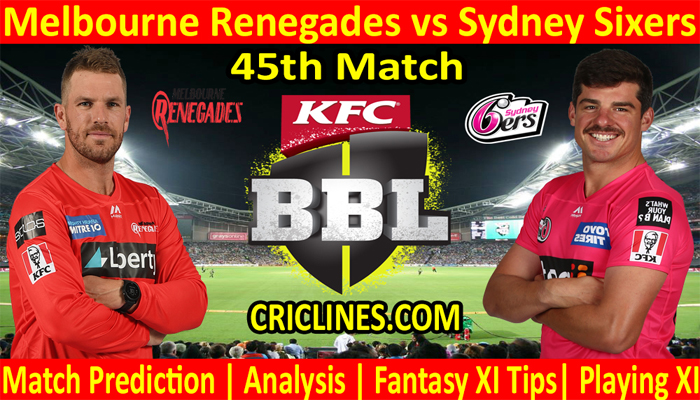 The world is ready to witness yet another big battle of BBL T20. The 45th match of Big Bash League 2021-22 is scheduled to play between Melbourne Renegades and Sydney Sixers on Tuesday, 11th January 2022 at Simonds Stadium, Geelong. We are posting safe, accurate, and secure today match prediction of BBL T20 free.

Melbourne Renegades lost early matches and that is the key reason why they are laying in the last four positions on the ladder. They had played a total of 10 matches with just three wins to their name. They had lost six matches while their one match was ended with no result. They are situated at the sixth position on the table.

Sydney Sixers is the third-best performing team of this tournament when we are writing this. They had also played 10 matches with six wins and three losses. Their one match was ended with no result and they are holding the third position on the points table.

Melbourne Renegades had faced a heavy defeat against Sydney Thunder in their most recent match by a huge margin of 129 runs. They won the toss and decided to field first. The performance of their bowling unit was very poor. They leaked 209 runs in their inning of 20 overs. Kane Richardson was the highest wicket-taker from their side but he leaked plenty of runs. He picked two wickets in his four overs bowled out against 39 runs. Zak Evans, Zahir Khan, Will Sutherland, and the skipper, Nic Maddinson picked one wicket each.

The batting order of Melbourne Renegades totally collapsed in their previous match. They failed to chase the target of 210 runs and their full team came back to the pavilion on a total of just 80 runs in 14.2 overs. James Seymour was the most successful and highest run-scorer from their side who scored 25 runs with the help of three boundaries. Aaron Finch and Kane Richardson scored 17 runs each while no other batsmen from their side could even enter into a double-figure.

Sydney Sixers had lost their most recent match against Perth Scorchers by the margin of five wickets. They won the toss and decided to bat first. The performance of their batting order was average. They scored 151 runs in their inning of 20 overs. Daniel Christian was the most successful and highest run-scorer from their side who scored 35 runs on 20 deliveries with the help of four boundaries and one huge six. Josh Philippe also performed well and scored 32 runs. Jordan Silk scored 26 runs while the skipper, Daniel Hughes had 24 runs to his name.

The bowling unit of Sydney Sixers totally failed to give the best performance in the previous match. They failed to defend the target of 152 runs and leaked this target in 19 overs. Ben Dwarshuis was the highest wicket-taker from their side who picked two wickets in his four overs bowled out against 34 runs. Jackson Bird, Hayden Kerr, and Shadab Khan picked one wicket each while Daniel Christian and Todd Murphy were the bowlers who failed to pick any wicket.

Head to Head History Between Melbourne Renegades and Sydney Sixers

Dan Christian, Josh Philippe, and Kane Richardson are key players to watch in this match.

The 45th match of Big Bash League 2021-22 is going to be held at Simonds Stadium, Geelong. We had observed in the previous matches played here that the pitch here at this venue is good for batting. The track is slower than the others we have seen and helps the spinners quite a bit. We are hoping that the surface is bound to get slower and be a bit more difficult for batting in this match. A score of 185 is going to be tough to chase.