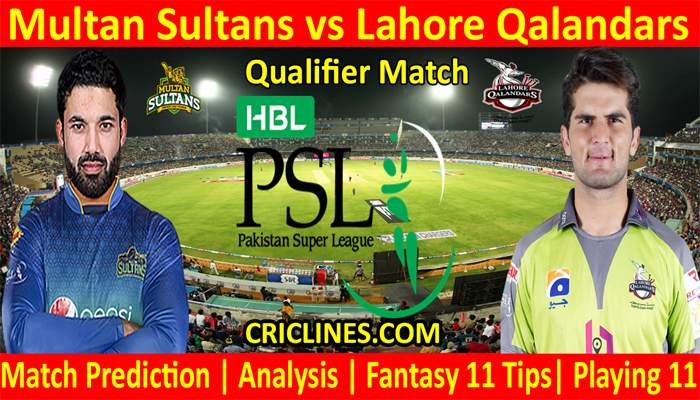 The cricket fans are ready to witness yet another big battle of PSL T20. The Qualifier match of Pakistan Super League 2022 is scheduled to play between Multan Sultans and Lahore Qalandars on Wednesday 23rd February 2022 at Gaddafi Stadium, Lahore. We are posting safe, accurate, and secure today match prediction for all matches of PSL T20 free.

We are in the playoff section of Pakistan Super League 2022 after the competition of league stage matches. Two top and best performers of this tournament will be competing in this qualifier match. The winner of this match will reach in the final of PSL seven while the loser will have an other chance to qualify.

Multan Sultans has given record breaking performance in this edition of PSL. They had won nine out of ten matches played at the league stage. Remember that Lahore Qalandars was the only team who beat the Sultans in one match. No other team could defeat the Sultans in this tournament.

Lahore Qalandars had improved since a couple of years and we also observed this in this edition of PSL. They had ended the league stage as the second best performers. They also played a total of 10 matches with six wins to their name. They lost four matches and are holding the second position on the table after the league stage matches had been completed.

Multan Sultans won their last league stage match against Islamabad United with the margin of six wickets. Earlier, they beat Quetta Gladiators in their previous match with a handsome margin of 117 runs. They won the toss and decided to bat first. The way how their batting order performed in the previous match was just outstanding. They put a total of 245 runs on the board in their 20 overs inning which was the second-highest total in the history of PSL. The skipper, Mohammad Rizwan was the highest run-scorer from their side who scored 83 runs on 54 deliveries with the help of seven boundaries and three huge sixes.

Rossouw scored 71 runs while Shan Masood smashed the inning of 57 runs on 38 balls. The bowling unit of Multan Sultans also performed well and defended the target of 246 runs. They leaked just 128 runs and send a full team of Quetta Gladiators back to the pavilion in 15.5 overs. Khushdil Shah was the most successful bowler from their side who picked two wickets in his 2.5 overs bowled out against 17 runs. Asif Afridi, David Willey, and Shahnawaz Dhani also picked two wickets each while Imran Tahir had one wicket to his name.

The most recent match of Lahore Qalandars was very interesting against Peshawar Zalmi which was tied and was decided in the super over later. This was the one and only match of Pakistan Super League season seven which went into the super over. Before that, they had won their most recent match against Islamabad United in their previous match with a handsome margin of 66 runs. They won the toss and decided to bat first. The performance of their batting order was just outstanding. They scored 197 runs in their inning of 20 overs. Harry Brook was the most successful and highest run-scorer from their side who scored his maiden century in PSL. He scored a total of 102 runs on 49 deliveries with the help of 10 boundaries and five huge sixes. Fakhar Zaman also performed well and scored his 7th fifty in this edition of PSL.

The way how the bowling unit of Lahore Qalandars performed in the previous match was just outstanding. They defended the target of 198 runs and leaked 131 runs in their inning of 20 overs. Almost all bowlers from their side performed well. Rashid Khan was the most successful bowler from their side who picked two wickets in his four overs bowled out against 19 runs. Haris Rauf, Zaman Khan, and the skipper, Shaheen Afridi also picked two wickets each while David Wiese had one wicket to his name.

Mohammad Rizwan, Fakhar Zaman, and Tim David are key players to watch in this match.

The toss had played a key role in the decision of all previously played matches of Pakistan Super League season 7. We had seen in the previous editions of this tournament that chase is the best option for the both teams at the venue of Lahore. Almost 65% matches had been won by the bowling first. According to toss prediction, the team who will win the toss may choose to field first.

The Qualifier match of Pakistan Super League season 2022 is schedules to be held at Gaddafi Stadium, Lahore. The pitch here at this venue is flat good for battting as there is no bounce and pace. Out field on this venue is very fast and the ball will travel to the boundary very qualicky. It also have a lot of help for the spin bowlers vut almost all team in this tournament have a strong batting order so this does not matter. According to the live cricket score, total of 180 runs should be as a par score.

The weather forecast in Lahore is good for a cricket match. The forecast is predicting almost no chances of rain on match day and we will have a full match to enoiy.

While we had a deep look at the squad, we think that Multan Sultans is going to perform well in this match the PSL T20 season 6 as they have a couple of players who can change the game. In this match, the batting department of the Lahore Qalandars is much stronger as compared to the Multan Sultans. We also have reports from different sources for the win of the Sultans.