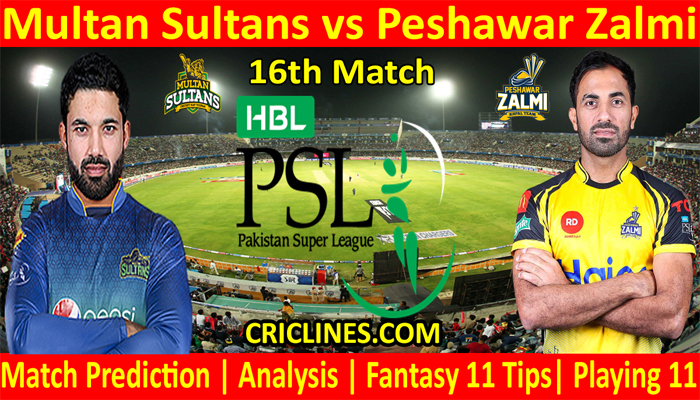 The world is ready to witness yet another big battle of PSL T20. The 16th match of Pakistan Super League 2022 is scheduled to play between Multan Sultans and Peshawar Zalmi on Thursday 10th February 2022 at Gaddafi Stadium, Lahore. We are posting safe, accurate, and secure today match predictions of PSL T20.

The first leg of PSL T20 is completed and now the remaining matches are shifting to Lahore. Multan Sultans and Peshawar Zalmi are going to face each other for the second time in this tournament. Earlier, Multan had beaten Peshawar. Multan Sultans had been the team of the tournament till now as they had not lost any match till now. They had won all five matches played and are leading the table.

Peshawar Zalmi had been an underperforming team in this edition of PSL T20 till now. They had lost three out of five matches played. They had won two matches and are laying at the second position from the bottom of the table. They had five matches left and had to win at least four matches to cement their place in the playoff.

The 16th match of Pakistan Super League season 2022 is scheduled to be held at Gaddafi Stadium, Lahore. The pitch here at this venue is flat good for batting as there is no bounce and pace. Out-field on this venue is very fast and the ball will travel to the boundary very quickly. It also has a lot of help for the spin bowlers but almost all teams in this tournament have a strong batting order so this does not matter. According to the live cricket score, a total of 170 runs should be as a par score.

The middle batting order of Multan Sultans had also been in good touch. Sohaib Maqsood, Rilee Rossouw, and Khushdil Shah took the charge in the middle overs and had played a key role in each and every win of the Sultans. David Willey, Imran Tahir, and Khushdil Shah are leading the bowling department. The conditions in Karachi were slow and these bowlers used that but we think that this will not remain the same in Lahore. This match will be a test for the bowlers of Multan Sultans. Shahnawaz Dahani was expected as a good performer but he had failed to repeat the performance of PSL 6.

Peshawar Zalmi was known as a tough team to beat in the previous edition of the Pakistan Super League but they had not done well in Karachi. Will the change of venue change the fat of Zalmi? time will tell this but we are hopeful that they will bounce back. The batting order of Peshawar Zalmi is strong and dangerous which is led by Hazratullah Zazai and Kamran Akmal. Akmal was known as a key player in the previous editions of PSL but we don’t think that he fits in the final playing eleven in this season.

Shoaib Malik, Sherfane Rutherford, Ben Cutting, and Haidar Ali are available to take care of the batting order which makes this team a dangerous batting lineup. Wahab Riaz was expected as a top performer from the Zalmi side but he had failed to prove it. He had been the most expensive bowler in most matches. Saqib Mahmood is part of the squad of this team but they had not used this experienced bowler at the right time.

Mohammad Rizwan, Tim David, and Hazratullah Zazai are key players to watch in this match.

The toss had played a key role in the decision of all previously played matches of Pakistan Super League season 7. We had seen in the previous editions of this tournament that chase is the best option for both teams at the venue of Lahore. Almost 60% of matches had been won by the bowling first. According to toss prediction, the team that will win the toss may choose to field first.

While we had a deep look at the squad, we think that Multan Sultans is going to perform well in this match the PSL T20 season 6 as they have a couple of players who can change the game. In this match, the batting department of the Peshawar Zalmi is much stronger as compared to the Multan Sultans. We also have reports from different sources for the win of the Sultans.