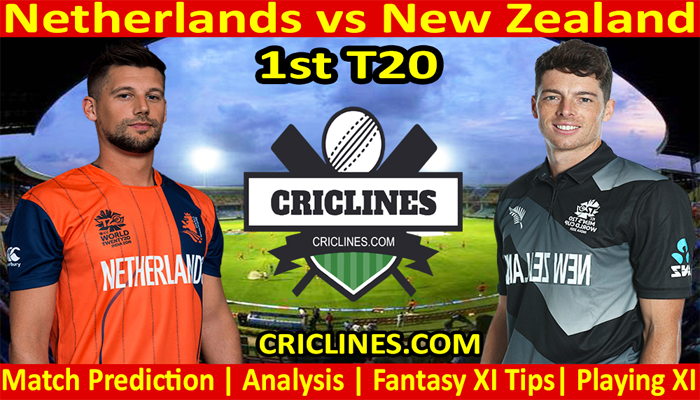 The cricket fans are ready to witness yet another big battle of T20 cricket. The 1st T20 match of the New Zealand tour of Netherlands, 2022 is scheduled to be held on Thursday, 4th August 2022 at Sportpark Westvliet, The Hague. We are providing 100 safe, perfect, and accurate today match prediction of the Netherlands and New Zealand.

New Zealand is on a tour of the Netherlands where they will play T20 matches. This tour is part of preparations for the upcoming T20 World Cup. This series is very important for both teams and especially for New Zealand to have a perfect combination for the big event of cricket.

The Netherlands is part of the team who will play in the T20 World Cup as they qualified for this big event of cricket in the previous year. Remember that the Netherlands had not won any match in 2022 and we don’t think that they will open the account as they are going to face strong opposition in their home conditions. Scott Edwards is going to lead The Netherlands in this home series and he is a key player on the team. He had been good in the recently played matches and we can expect that he will perform well in this home series.

Scott Edwards had scored near about a hundred runs in the recent three matches he played. He will be leading the batting order of the Netherlands with Max O’Dowd. Max O’Dowd is the other batter who was good in recent times. The bowling department of the Netherlands is not very strong and is led by Bas de Leede who had been the leading wicket-taker in the previous matches for the Netherlands. Logan Van Beek is the other player who is part of the squad of this team.

New Zealand had been good and outstanding in the recent matches. They had won nine matches in a row and now are going to face a weak side. We are sure and our reports of today prediction are also confirming that they will win both matches against the Netherlands before they fly for the tour of the West Indies. Remember that New Zealand had recently whitewashed Ireland and Scotland. Mark Chapman is in good form these days and he was just superb in the recent series against Ireland and Scotland.

The Netherlands had played a total of 88 T20 matches with 45 wins to their name. They had lost 39 matches while their 3 matches ended with no result.

New Zealand had played 165 T20 Internationals. They had won 85 matches and lost 76 matches. Their 4 matches ended with no results.

The 1st T20 match between the Netherlands and New Zealand is going to be played at Sportpark Westvliet, The Hague. The pitch at this stadium is excellent for batting. The boundaries at this venue are short and will bring the spinners into play. The pitch will continue to be good for batting throughout the match.

The weather forecast in The Hague on match day is good. There are almost no chances of rain and we should have a full match.

Martin Guptill and M Chapman are key players to watch in this match.

Who Will Win Netherlands vs New Zealand 1st T20

Who Will Win Netherlands vs New Zealand 1st T20 Toss-NET

Who Will Win Netherlands vs New Zealand 1st T20 Match-NZ

Dream11 prediction for Netherlands vs New Zealand. After checking the latest player’s availability, the Dream 11 Team for this match of the Netherlands and New Zealand is mentioned under.