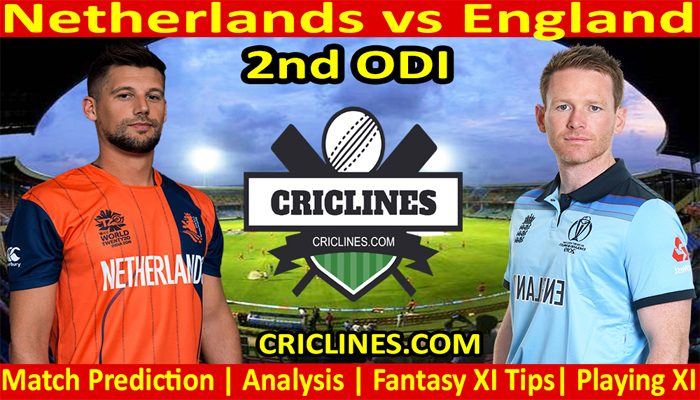 The cricket fans are ready to witness yet another big battle of ODI cricket. The 2nd ODI match of the England tour of Netherlands, 2022 is scheduled to be held on Sunday, 19th June 2022 at VRA Cricket Ground, Amstelveen. We are providing 100 safe, perfect, and accurate today match prediction of the Netherlands and England.

England was just outstanding in the opening match of this tour of Netherlands especially the batting order of English team was just superb. On the other side, the Netherlands also performed well but they could not compete against a strong team and as a result, they were on the losing side.

The bowling department of the Netherlands was under the belt in the first match against England. They leaked huge runs in 50 overs. They were charged for 498 runs in their inning of 50 overs and could manage to pick just four wickets. Pieter Seelaar was the highest wicket-taker from their side but he leaked a lot of runs. He picked two wickets while he was charged for 83 runs. Shane Snater picked one wicket while he leaked 99 runs in 10 overs. Logan van Beek was the other bowler who had a wicket to his name. He picked one wicket while he was charged for 82 runs. Bas de Leede, Boissevain, and Aryan Dutt were the bowlers who could not manage to pick any wicket.

The batting order of the Netherlands performed well but could not chase a big target of 499 runs. They scored 266 runs and their full team came back to the pavilion in 49.4 overs. Scott Edwards was the most successful batter from their side who remained not out after scoring 72 runs. He faced 56 balls and smashed five boundaries and one huge six during his inning. Max ODowd scored 55 runs while Bas de Leede could manage to score 28 runs.

The performance of the bowling department of England was not impressive even though they defended the target of 499 runs and leaked 266 runs. They send the full team of the Netherlands back to the pavilion in 19.4 overs. Moeen Ali was the highest wicket-taker with three wickets to his name in 10 overs while he was charged for 57 runs. Sam Curran, Reece Topley, and David Willey picked two wickets each while Dawid Malan had one wicket to his name. Adil Rashid was the only bowler from the side of England who could not pick any wicket.

Netherlands had played a total of 96 ODI matches with 34 wins to their name. They had lost 57 matches while their 4 matches were ended with no result and one match was tied.

England had played 763 One Day Internationals. They had won 386 matches and lost 340 matches. Their 29 matches ended with no results and 8 matches were tied.

The 2nd ODI match between Netherlands and England is going to be played at VRA Cricket Ground, Amstelveen. The pitch at this stadium is excellent for batting. The boundaries at this venue are short and will bring the spinners into play. The pitch will continue to be good for batting throughout the match.

The weather forecast in Amstelveen on match day is good. There are almost no chances of rain and we should have a full match.

Jose Buttler is in superb form and Jason Roya has a good record while playing in the Netherlands. Max ODowd had performed well in the recent matches. Darren Bravo is also in superb form. These players will be key to watch in this match.

Who Will Win Netherlands vs England 2nd ODI

Who Will Win Netherlands vs England 2nd ODI Toss-PAK

Who Will Win Netherlands vs England 2nd ODI Match-WI

Dream11 prediction for Netherlands vs England. After checking the latest player’s availability, the Dream 11 Team for this match of Netherlands and England is mentioned under.