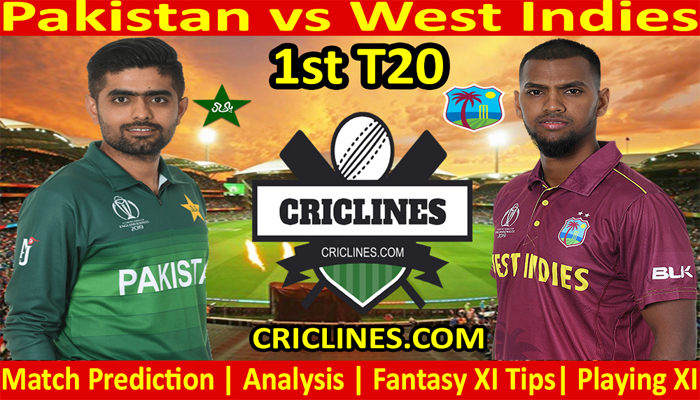 The cricket fans are ready to witness yet another big battle of T20 cricket. The 1st T20 match of the West Indies tour of Pakistan, 2021 is scheduled to be held on Monday, 13th December 2021 at National Stadium, Karachi. We are providing 100 safe, perfect, and accurate today match prediction of Pakistan vs West Indies.

Pakistan had ruled the ranking to T20 cricket for a long and but after some time, they moved down in ICC T20 ranking. They were just superb in recently played T20 World but they were beaten by Australia in the semi-final. After World Cup, they had a successful tour of Bangladesh and had a whitewash in the series of T20 and Tests. West Indies totally failed in the World Cup even they were the defending champions.

Pakistan is going to play in its home conditions but we are sure that they will come to this match with full strength. We can see some major changes in the squad of Pakistan. Shoiab Malik, Imad Wasim, and Sarfaraz Ahmed had been dropped for this home series while Hasan Ali had been given rest for a couple of matches.

The main focus of Pakistan will be on the skipper Babar Azam and Mohammad Rizwan. Both players are in good form since they had played World Cup. They were also outstanding in the recent series against Bangladesh. Fakhar Zaman is also available to handle the top order. The bowling unit of Pakistan is very strong. Mohammad Wasim Jr, Shaheen Afridi, and Shahnawaz Dahani are likely part of team Pakistan for this match.

West Indies is having the tour of Pakistan without their first choice and major players. Most players of this team are coming to Pakistan for the first time but this is not mean that they are very poor. They have the players like Shai Hope, Darren Bravo, Nicholas Pooran, and Brandon King in their squad.

Odean Smith is back in the squad of the West Indies team who can be dangerous for the batting order of Pakistan in the conditions of Karachi. You should know that his average bowling speed is 140 plus which is very dangerous. Romario Shepherd and Dominic Drakes are also in the squad of West Indies and we are sure that these both players will be part of the playing eleven for the first match of this three matches series.

Pakistan had played a total of 186 T20 matches with 115 wins to their name. They had lost 66 matches while their 5 matches were ended with no result.

West Indies had played 149 T20 Internationals. They had won 65 matches and lost 75 matches. Their 9 matches ended with no results.

Pakistan had faced West Indies in 18 T20 matches where they won 12 while West Indies won 3 matches. Three matches between these two teams were ended with no result.

The 1st T20 match between Pakistan and West Indies is going to be played at National Stadium, Karachi. The pitch at this stadium is excellent for batting. The boundaries at this venue are short and will bring the spinners into play. The pitch will continue to be good for batting throughout the match.

Babar Azam is in superb form and while Mohammad has a good record while playing in Pakistan. Nicholas Pooran had performed well in the recent matches. Darren Bravo is also in superb form. These players will be key players to watch in this match.

Who Will Win Pakistan vs West Indies 1st T20

Who Will Win Pakistan vs West Indies 1st T20 Toss-WI

Who Will Win Pakistan vs West Indies 1st T20 Match-PAK