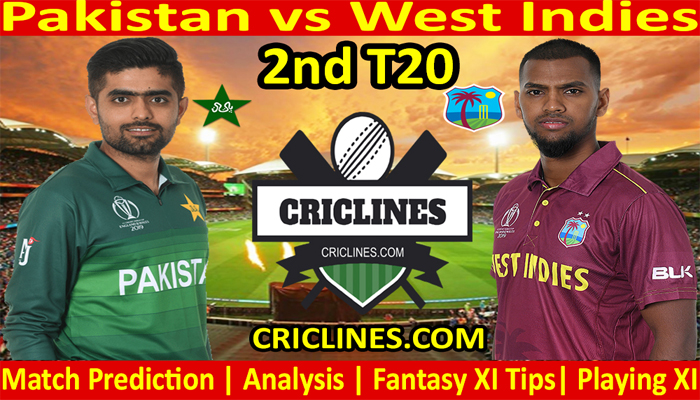 The world is ready to witness yet another big battle of T20 cricket. The 2nd T20 match of the West Indies tour of Pakistan, 2021 is scheduled to be held on Tuesday, 14th December 2021 at National Stadium, Karachi. We are providing 100 safe, perfect, and accurate today match prediction of Pakistan and the West Indies.

Pakistan had a kick start to this home series of three T20 matches against West Indies and had won the 1st match with a huge margin of 63 runs. The batting and bowling department of Pakistan had given the best performance. On the other hand, West Indies had lost the 1st match and next to both matches are must-win for this team to win the series.

Pakistan lost the toss and was asked to bat first. The start of Pakistan was not good as they lost their skipper, Babar Azam on a total of just one run. The middle batting order of Pakistan performed well and they scored 200 runs in their 20 overs. Mohammad Rizwan was the highest run-scorer from their side who scored 78 runs. He faced 52 deliveries with the help of 10 boundaries. Haidar Ali also performed well and scored 68 runs. He faced 39 balls and smashed six boundaries and four huge sixes. Mohammad Nawaz also performed well and scored 30 runs on just 10 balls.

The performance of the bowling unit of Pakistan was also outstanding. They defended the target of 201 runs and leaked 137 runs. They send all teams of West Indies back to the pavilion in 19 overs. Mohammad Wasim Jr was the highest wicket-taker from their side but he leaked plenty of runs. He was charged for 40 runs in his four overs bowled out. Shadab Khan also performed well and picked three wickets in his four overs bowled out against just 17 runs. Shaheen Afridi, Mohammad Nawaz, and Haris Rauf picked one wicket each.

The bowling unit of West Indies totally failed to give the best performance in the opening match of three matches series. They were charged for 200 runs in their inning of 20 overs. Romario Shepherd was the highest wicket-taker from their side with two wickets to his name. He was charged for 43 runs in his four overs bowled out. Akeal Hosein, Oshane Thomas, Dominic Drakes, and Odean Smith had one wicket each to their names.

The batting order of the West Indies also collapsed in the previous match. They were all-out on a total of 137 runs in 19 overs while they were chasing the target of 201 runs. Shai Hope was the highest run-scorer from their side who scored 31 runs. Odean Smith scored 24 runs while Rovman Powell could manage to score 23 runs.

Pakistan had played a total of 187 T20 matches with 116 wins to their name. They had lost 66 matches while their 5 matches were ended with no result.

West Indies had played 150 T20 Internationals. They had won 65 matches and lost 76 matches. Their 9 matches ended with no results.

Pakistan had faced West Indies in 19 T20 matches where they won 13 while West Indies won 3 matches. Three matches between these two teams were ended with no result.

The 2nd T20 match between Pakistan and West Indies is going to be played at National Stadium, Karachi. The pitch at this stadium is excellent for batting. The boundaries at this venue are short and will bring the spinners into play. The pitch will continue to be good for batting throughout the match.

Babar Azam is in superb form and while Mohammad Rizwan has a good record while playing in Pakistan. Nicholas Pooran had performed well in the recent matches. Darren Bravo is also in superb form. These players will be key to watch in this match.

Who Will Win Pakistan vs West Indies 2nd T20

Who Will Win Pakistan vs West Indies 2nd T20 Toss-PAK

Who Will Win Pakistan vs West Indies 2nd T20 Match-PAK