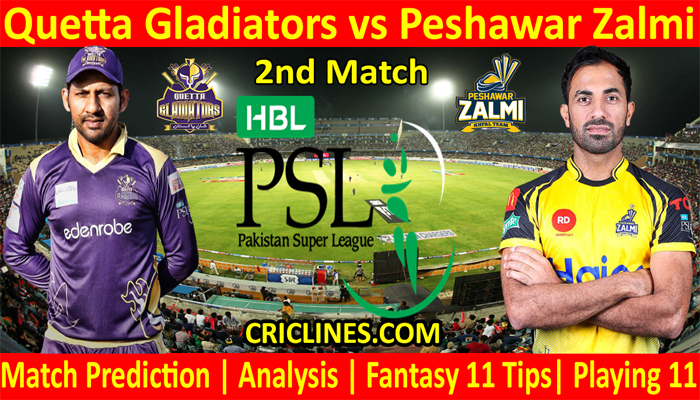 The world is ready to witness yet another big battle of PSL T20. The 2nd match of Pakistan Super League 2022 is scheduled to play between Quetta Gladiators and Peshawar Zalmi on Friday 28th June 2022 at National Stadium, Karachi. We are posting safe, accurate, and secure today match prediction of PSL free.

Pakistan Super League season seven had started with the opening match of Multan and Karachi and on the second day, Quetta Gladiators will be facing the runner-up team of the previous season of PSL Peshawar Zalmi.

Both had not made major changes in their final squad for this edition of the Pakistan Super League. Quetta Gladiators was just outstanding in the early seasons of this tournament but they dropped the momentum and the previous two seasons were not good. On the other side, Peshawar Zalmi qualified for the final of PSL season six but was beaten by Multan Sultans in the final match.

Shahid Afridi had joined the Gladiators in this edition of the Pakistan Super League. Iftikhar Ahmed, Mohammad Nawaz, James Faulkner, and Luke Wood are all-rounders in the squad of the Gladiators. The bowling unit of Gladiators is strong and experienced. Mohammad Hasnain, Naseem Shah, Sohail Tanveer, Khurram Shahzad, Noor Ahmad, and Ghulam Mudassar will be leading the bowling department of the Gladiators.

Peshawar Zalmi is the strongest team in this tournament but they are facing some issues at the early stage of this season of PSL. Their skipper, Wahab Riaz, key batter Hazratullah Zazai, and opening batsman Haidar Ali had been found COVID19 positive and will not be available for some early matches. The batting order of Zalmi is strong and experienced at least on papers. Tom Kohler-Cadmore and Liam Livingstone are going to lead the batting order of Zalmi.

Shoaib Malik, Sherfane Rutherford, Hussain Talat, Salman Irshad, and Ben Cutting are the key all-rounders of Zalmi. Kamran Akmal and Mohammad Haris are wicket-keeper batsmen in this team. The bowling unit of Peshawar Zalmi is not much stronger. Saqib Mahmood, Usman Qadir, Mohammad Amir Khan, Mohammad Umar, Arshad Iqbal, and Sameen Gul will be taking care of the bowling unit of Peshawar Zalmi.

Mohammad Nawaz, Mohammad Hasnain, and Sherfane Rutherford are key players to watch in this match.

The 2nd match of Pakistan Super League season 2022 is scheduled to be held at National Stadium, Karachi. The pitch here at this venue is flat good for batting as there is no bounce and pace. Out field on this venue is very fast and the ball will travel to the boundary very quickly. It also has a lot of help for the spin bowlers but almost all teams in this tournament have a strong batting order so this does not matter. According to the live cricket score, a total of 180 runs should be as a par score.

While we had a deep look at the squad, we think that Peshawar Zalmi is going to perform well in this match the PSL T20 season 6 as they have a couple of players who can change the game. In this match, the batting department of the Peshawar Zalmi is much stronger as compared to the Quetta Gladiators. We also have reports from different sources for the win of the Sultans.