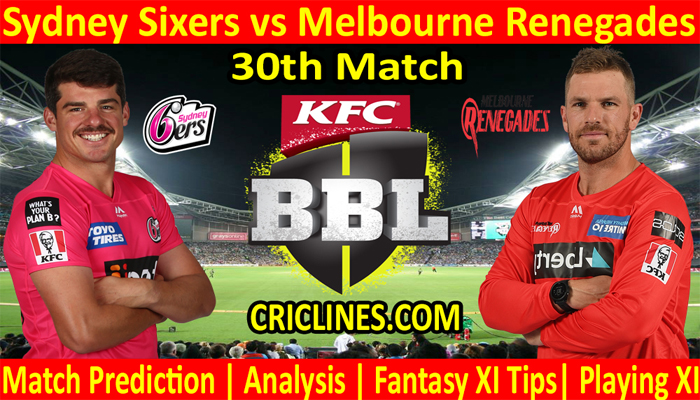 The world is ready to witness yet another big battle of BBL T20. The 30th match of Big Bash League 2021-22 is scheduled to play between Sydney Sixers and Melbourne Renegades on Saturday, 1st January 2022 at International Sports Stadium, Coffs Harbour. We are posting safe, accurate, and secure today match prediction of BBL T20 free.

We are in the middle stage of Big Bash League edition 11 and there is a big gap between the 1st and last four positions. This match is going to play between the topper and the worst performers of this tournament. Sydney Sixers is the best performing team with 21 points and an impressive net run rate.

Sydney Sixers had won their previous match against Brisbane Heat in their most recent match with the margin of two wickets. They lost the toss and were put in to bat first. The way how their bowling unit performed in the most recent match was just outstanding. They leaked just 105 runs and send all team of Brisbane Heat back to the pavilion in 19.1 overs. Sean Abbott was the most successful and highest wicket-taker from their side who picked four wickets in his four overs bowled out against 31 runs. Ben Dwarshuis and Hayden Kerr picked two wickets each while Dan Christian picked one wicket.

The batting order of Sydney Sixers is strong and experienced but they failed to give the best performance in the previous match anyhow they chased a low target of 106 runs on the last ball of their 20th over inning but their eight batsmen came back to the pavilion. Sean Abbott was the highest run-scorer from their side who scored 37 runs with the help of two boundaries and the same huge sixes. He remained not out till the chase of the target. Ben Dwarshuis scored 23 runs while the skipper, Moises Henriques scored 15 runs.

Melbourne Renegades had lost their most recent match against Hobart Hurricanes by a huge margin of 85 runs. They won the toss and decided to field first. Their bowling unit almost failed to give the best performance and leaked 206 runs in their 20 overs inning. Reece Topley was the only successful and highest wicket-taker from their side who picked three wickets in his four overs bowled out against just 17 runs. Jack Prestwidge and the skipper, Maddinson picked one wicket each.

Mohammad Nabi, Kane Richardson, Zahir Khan, and James Pattinson were the bowlers who failed to pick any wicket. The batting order of Melbourne Renegades totally failed to give the best performance. They failed to chase the target of 207 runs and scored just 121 runs. Their all team got out in 15.5 overs. Sam Harper was the only successful batter from their side who scored 57 runs. He faced 35 balls and smashed four boundaries and three huge sixes. Jake Fraser scored 21 runs.

Head to Head History Between Sydney Sixers and Melbourne Renegades

Sam Harper, Sean Abbott, and Zahir Khan are key players to watch in this match.

Sydney Sixers are overall a strong team as compared to the Melbourne Renegades at least on papers. According to our match prediction, Melbourne Renegades are the favorite team who will win this match. There are many factors that make Sydney Sixers a favorite team to win this match. Some of the key factors are mentioned as under:

The 30th match of Big Bash League 2021-22 is going to be held at International Sports Stadium, Coffs Harbour. We had observed in the previous matches played here that the pitch here at this venue is good for batting. The track is slower than the others we have seen and helps the spinners quite a bit. We are hoping that the surface is bound to get slower and be a bit more difficult for batting in this match. A score of 185 is going to be tough to chase.