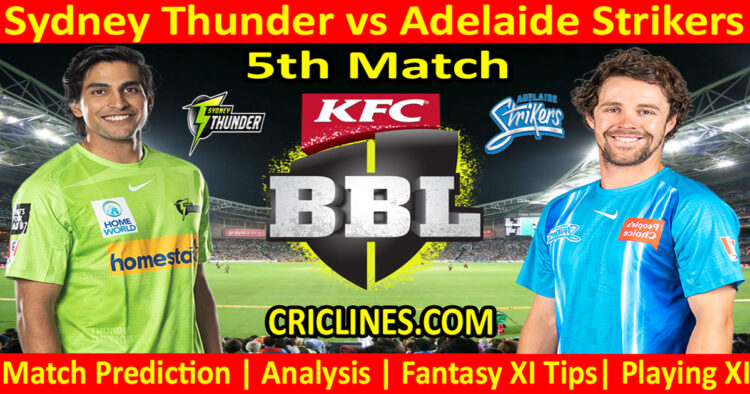 The world is ready to witness yet another big battle of BBL T20. The 5th match of Big Bash League 2022-23 is scheduled to play between Sydney Thunder and Adelaide Strikers on Friday, 16th December 2022 at Sydney Showground Stadium, Sydney. We are posting safe, accurate, and secure today match prediction of BBL T20.

Sydney Thunder had an ideal start to this season of the Big Bash League. They had beaten Melbourne Stars in their very first match of this tournament. It was a close contest that was decided on the final ball of the 20th over. The bowling unit of this team performed well but their batting could not perform well in the previous match.

Adelaide Strikers also had a good start to this tournament and had beaten the runner-up team of the previous edition of Big Bash League, Sydney Sixers in their first match by a big margin of 51 runs. The batting and bowling units of this team were just superb and we don’t think that they will make any change in the playing eleven of this match.

Sydney Thunder did not perform as many of us were expecting but they opened the account on the ladder and registered three points. They won the toss and decided to field first. The way how their bowling unit performed in the previous match was just outstanding. They leaked just 122 runs in 20 overs. They used six bowlers in the previous match and almost all bowlers from their side performed well. Fazalhaq Farooqi was the most successful bowler from their side picking two wickets in two overs against just 20 runs. Daniel Sams also performed well and had two wickets to his name in four overs while he was charged for 21 runs. Gurinder Sandhu also picked two wickets while he leaked 23 runs in four overs.

Brendan Doggett and Chris Green picked one wicket each in the previous match. Chris Green leaked just 19 runs in four overs. The skipper, Jason Sangha was the only bowler from their side who failed to pick any wicket in the previous match. The batting order of Sydney Thunder failed to give the best performance even though they chased the target of 23 runs on the final ball of the 20th over but they lost nine wickets for that. Alex Ross was the highest run-scorer from their side with just 28 runs to his name. He faced 27 balls and smashed three boundaries. The skipper, Jason Sangha also performed well and put some runs on the board. He scored 24 runs on 25 balls with the help of two boundaries. Gurinder Sandhu played a main role for the team and remained not out after scoring 20 runs. He faced 16 balls and smashed two boundaries and one huge six. Chris Green scored 17 runs while Oliver Davies could manage to score just 11 runs.

Adelaide Strikers were just superb in their opening match of this edition of the Big Bash League. They were just outstanding in almost each and every department of the game. They won the toss and decided to bat first. The way how their batting order performed in the previous match was just superb. They scored a total of 184 runs in 20 overs. Matthew Short was the most successful and highest run-scorer from their side with 84 runs to his name on just 53 balls with the help of 11 boundaries and two huge sixes. Adam Hose was the other batsman who was just good with the bat. He scored 40 runs while he faced 22 balls and smashed three boundaries and two huge sixes. Chris Lynn also had an outstanding performance with the bat. He scored 41 runs on 34 balls with the help of three boundaries and two huge sixes. Remember that no other batsmen from their side could manage to enter into the double figures.

Jake Weatherald, Rashid Khan, and Thomas Kelly scored just one run each. The bowling unit of Adelaide Strikers also performed well in the previous match. They defended the target of 185 runs and leaked 133 runs in 20 overs. Henry Thornton and Rashid Khan performed well in the first match. Henry Thornton was the most successful and highest wicket-taker from their side who picked four wickets in four overs against just 20 runs. Rashid Khan was the other bowler with some wickets to his name. He picked up three wickets while he was charged for 21 runs in four overs. No other bowler from their side could manage to pick any wicket. Matthew Short, Wes Agar, Colin de Grandhomme, and the skipper, Peter Siddle were the bowlers who remained wicketless in the previous match. Adelaide Strikers had proved that they are a strong side and they can beat any strong team in this tournament but for that, they need to give the best performance and each and every player of this team should give his 100 % performance.

Matthew Short, Rashid Khan, and Fazalhaq Farooqi are key players to watch in this match.

The 5th match of Big Bash League 2022-23 is going to be held at Sydney Showground Stadium, Sydney. We had observed in the previous matches played here that the pitch here at this venue is good for batting. The track is slower than the others we have seen and helps the spinners quite a bit. We are hoping that the surface is bound to get slower and be a bit more difficult for batting in this match. A score of 185 is going to be tough to chase.