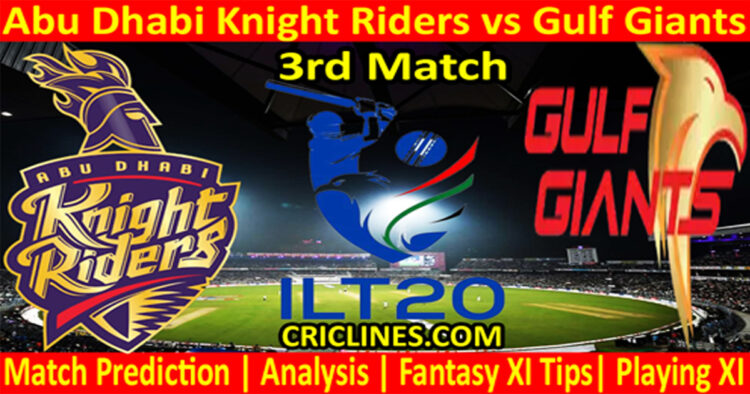 The world is ready to witness yet another big battle of IL 2023. The 3rd match of the International League 2023 is scheduled to play between Abu Dhabi Knight Riders and Gulf Giants on Sunday, 15th January 2023 at Sheikh Zayed Stadium, Abu Dhabi. We are posting safe, accurate, and 100% secure today match prediction of IL T20 2023 with live IL scores and ball by ball updates with prediction.

Abu Dhabi Knight Riders are a strong team but totally failed to give the best performance and lost their match by a big margin of 73 runs against Dubai Capitals. They won the toss and decided to field first but their bowling unit totally failed to give the best performance and leaked 187 runs in 20 overs. Ravi Rampaul was the most successful bowler with two wickets to his name in four overs against 36 runs. Ali Khan also picked two wickets but he leaked plenty of runs. He was charged for 45 runs in just three overs.

Andre Russell and the skipper, Sunil Narine picked one wicket each while Akeal Hosein and Zawar Farid were the bowlers who failed to pick any wicket. The batting order of the Knight Riders totally collapsed in their first match. They could manage to score just 114 runs in 20 overs while chasing the target of 188 runs. Just two batsmen from their side could manage to enter into the double figures. Paul Stirling was the most successful and highest run-scorer scoring 54 runs on 38 balls with the help of five boundaries and two huge sixes. Andre Russell was the other batsman who entered in the double figure and scored 12 runs.

Gulf Giants are going to play their very first match of this season of International League T20. They picked some best players and we are hoping that they will perform well in this match. They have some hard hitters in their squad. Shimron Hetmyer is the leading batsman of this team. Chris Lynn recently played in Big Bash League he is in good form. We are hoping that he will perform well in this match.

James Vince is also in good form and can be the main player of this team in this match. David Wiese had played a lot of cricket matches in UAE specially in PSL. He can also play a main role for this team. Ayan Afzal Khan and Ch Rizwan are local players from UAE who are part of the squad of Giants. This team has a lot of batting options to use. The bowling unit of Gulf Giants is also strong. Dominic Drakes, Qais Ahmad, Richard Gleeson, and Chris Jordan are the leading bowlers in this team.

Gulf Giants is overall a strong team than Abu Dhabi Knight Riders. They have the best players of the t20 format of cricket. The batting order of this team is also strong and some well-known hitters of the t20 format are part of the squad of this team, so the winning chances of today’s match for Gulf Giants have been increased. The equation of who will win today cricket match prediction is mentioned as under.

The toss is going to play important in the result of each and every match of IL 2023. According to the toss prediction, the team who will win the toss will elect to field first as defending had been dificult in the conditions of United Arab Emirates.

The 3rd match of IL T20, 2023 is going to be held at the Sheikh Zayed Stadium, Abu Dhabi. We had observed in the most recent matches played here that the pitch here at this venue is good for batting especially in early overs. The track has a good amount of pace and bounce which allows the batsmen for the good cricketing shorts but this ground also has big boundaries which can be a plus point for the bowlers. The dew will play a major part in the second inning. A score of 180 plus seems to be a par score on this venue.

The weather forecast for Abu Dhabi is good this cricket match. There are almost no chances of rain in the region and the weather will be good on night as we know that the nights are cooler in UAE in the winter season.

Andre Russell, Chris Lynn, and James Vince are key players to watch in this match.

Dream11 fantasy team prediction for today’s match of Abu Dhabi Knight Riders vs Gulf Giants IL 2023. After checking the latest player’s availability and which players will be part of the playing eleven of both teams, the possible tactics that the two teams might use as we had learned from previous matches played here to make the best possible Dream11 team.

We had provided you the above-mentioned IL T20 prediction on the basis of our research, understanding, and analysis. These prediction tips are also based the the reports which we have from our different source. You can consider the point we had provided you and the decision will be yours that you hve to make at your own risk.