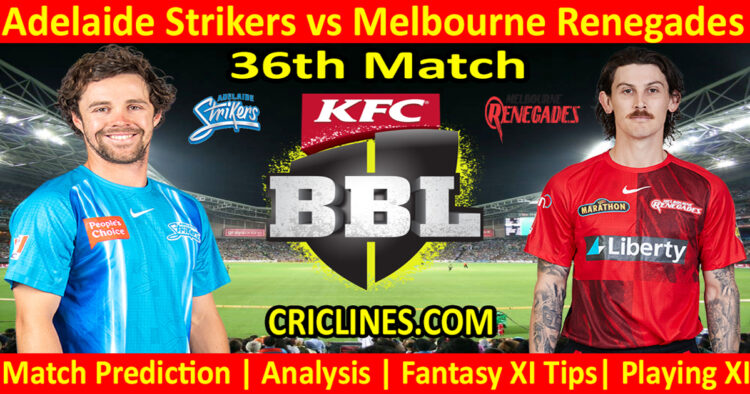 The world is ready to witness yet another big battle of BBL T20. The 36th match of Big Bash League 2022-23 is scheduled to play between Adelaide Strikers and Melbourne Renegades on Tuesday, 10th January 2022 at Adelaide Oval, Adelaide. We are posting safe, accurate, and secure today match prediction of BBL T20 free.

This match between Adelaide Strikers and Melbourne Renegades is going to be very interesting. Adelaide Strikers lost four matches in a row but won their previous match against the Hurricanes and will be confident for this match. Now they had played a total of eight matches with four wins to their name. They had lost four matches and are situated in the fifth position on the ladder.

Melbourne Renegades did not have a good start to this edition of the Big Bash League but now they had won two matches in a row. They had won five out of nine matches played till now. They had lost four matches and are holding the third position on the points table. They have to win this match at any cost to cement their place in the top four teams. We are sure that they will win this match.

Adelaide Strikers are a strong batting side and they proved this in their most recent match against Hobart Hurricanes. The news is not good for Adelaide Strikers as their two best-performing players are leaving the side to participate in SA20 T20 League. Chris Lynn and Rashid Khan are the players who are leaving the Strikers. We think that Chris Lynn will available till their match against Brisbane Heat. Remember that Chris Lynn had scored 324 runs for the Strikers while Rashid Khan had picked six wickets with the best economy rate of 6.42. Alex Carey and Travis Head are back on the side and will be replacing Rashid Khan and Chris Lynn.

Matthew Short had been the leading run-scorer from their side and had scored 321 including his century against Hobart Hurricanes. Now Colin de Grandhomme and Adam Hose have the responsibility to handle the batting order of the Strikers. Henry Thornton had proved the best bowler of Adelaide Strikers with 16 wickets to his account. Wes Agar is the other bowler who had performed well in the previous matches. The bowlers of the Strikers totally failed to give the best performance in their previous match against Hobart Hurricanes and leaked 229 runs in 20 overs. Colin de Grandhomme picked two wickets while Devon Conway and Matthew Short picked one wicket each. The batting order of Adelaide Strikers was just outstanding in the previous match where they chased the target of 230 runs with three balls left. Matthew Short scored his maiden century of this season of BBL on 59 balls with the help of eight boundaries and three huge sixes and Chris Lynn scored 64 runs.

Two new leagues of T20 cricket are going to start and some key players of almost all teams of the Big Bash League are leaving for this series. Melbourne Renegades are among those teams whose best-performing players will depart for other leagues. Mujeeb Ur Rahman, Andre Russell, and Akeal Hosein are the players who are leaving the Renegades to take part in different other leagues. Akeal Hosein had been the best bowler of the Renegades and picked 13 wickets in the previously played matches. We think that losing these players will prove a big loss for the Renegades. Some other key players of Melbourne Renegades like Nic Maddinson and Shaun Marsh had been facing injury issues.

Aaron Finch had been the top run-scorer for Strikers and he had scored 242 runs with a good strike rate. Martin Guptill was not performing well in some opening matches but finally, he is back to good form and we are hoping that he will perform well in the next matches. Jonathan Wells and Sam Harper are other batsmen who had been good in this tournament so far. Melbourne Renegades are coming to his match on the back of a massive win over Hobart Hurricanes with a handsome margin of six wickets. Their bowling unit was good and they leaked 162 runs in 20 overs. Tom Rogers and Kane Richardson picked two wickets each while Sutherland and Akeal Hosein picked one wicket each. The batting order of Melbourne Renegades was just outstanding. They chased the target of 163 runs in 18.1 overs. Sam Harper proved the most successful and highest run-scorer with 89 runs to his account. He faced 48 balls and smashed four boundaries and seven huge sixes.

Aaron Finch, Sam Harper, and Matthew Short to watch in this match.

The toss will play an important role in the decision of all matches of the Big Bash League. Having a good total on the board is always a big advantage in these kinds of big matches. According to the toss prediction, the team who will win the toss may choose to bat first.

The 36th match of Big Bash League 2022-23 is going to be held at Adelaide Oval, Adelaide. We had observed in the previous matches played here that the pitch here at this venue is good for batting. The track is slower than the others we have seen and helps the spinners quite a bit. We are hoping that the surface is bound to get slower and be a bit more difficult for batting in this match. A score of 185 is going to be tough to chase.