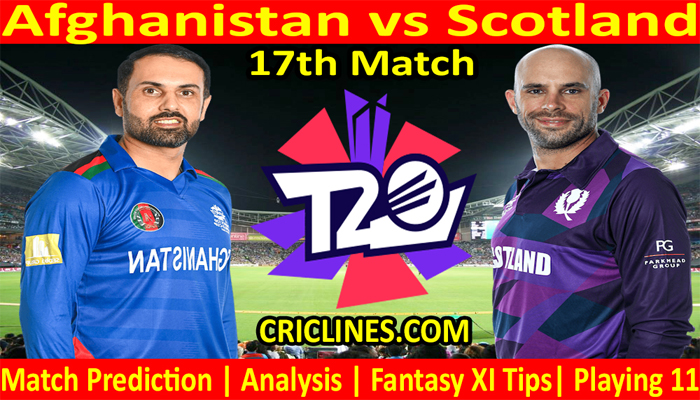 The world is ready to witness yet another big battle of World Cup T20. The 17th Match of World Cup T20 2021 is scheduled to play between Afghanistan and Scotland on Monday, 25th October 2021 at Sharjah Cricket Stadium, Sharjah. We are posting safe, accurate, and secure today match prediction of ICC T20 World Cup free.

Afghanistan is going to play its first match of ICC T20 World Cup 2021 against Scotland. We have no doubt that Afghanistan is a strong team in each and every department of the game. They have some hard hitters of the ball and also best and world-class bowlers like Rashid Khan. On the other hand, Scotland had beaten all their group fellow team like Bangladesh, Papua New Guinea, and Oman. They will be confident for this match and we can’t take Scotland an easy team to beat.

Afghanistan had played two warmup matches before their first match. They were beaten by South Africa by a handsome margin but in their second match, they beat West Indies quite easily. This will be a big match for Afghanistan and they will have to win this match to get some confidence to compete against the strong team of their groups like India, Pakistan, and New Zealand. The batting order of this team is good. Rahmanullah Gurbaz, Mohammad Shahzad, and Hazratullah Zazai have a lot of responsibility on their shoulders.

Afghanistan has some best bowlers on its side and the conditions in Sharjah will also help this team. Mujeeb ur Rahman, Mohammad Nabi, and Rashid Khan will prove good in the conditions of Sharjah. Rashid Khan had recently played in these conditions as he had played a lot of cricket in the recent edition of IPL. In our opinion, he will be a game-changer in this match.

Scotland had been just outstanding in the first round of the World Cup and had won their all-played matches. They had beaten Oman in their most recent match with a handsome margin of eight wickets. The performance of their bowling unit was just outstanding. They leaked 122 in their inning of 20 overs. Josh Davey was the highest wicket-taker from their side who picked three wickets in his four overs bowled out against 25 runs.

Safyaan Sharif and Michael Leask picked two wickets each while Mark Watt had one wicket to his name. The batting order of Scotland also performed well in their most recent match and chased the target of 123 runs in 17 overs. Kyle Coetzer was the most successful and highest run-scorer from their side who scored 41 runs on 28 deliveries with the help of two boundaries and three huge sixes. Richie Berrington scored 31 runs while Matthew Cross remained not out after scoring 26 runs.

Rashid Khan, Kyle Coetzer, and Mujeeb ur Rahman are key players to watch in this match.

Afghanistan is full of experienced and young players of the t20 format. The batting order of this team is also strong and some well-known hitters of the t20 format are part of the squad of this team, so the winning chances of today’s match for Afghanistan have been increased. The equation of who will win today’s cricket match prediction and who will win the cricket match today is mentioned as under.

The 17th Match of World Cup T20 2020-21 is going to be held at Sharjah Cricket Stadium, Sharjah. We had observed in the previous matches played here that the pitch here at this venue is good for batting. The track is slower than the others we have seen and helps the spinners quite a bit. We are hoping that the surface is bound to get slower and be a bit more difficult for batting in this match. A score of 170 is going to be tough to chase.

Who Will Win Afghanistan vs Scotland, 17th Match WTC 21