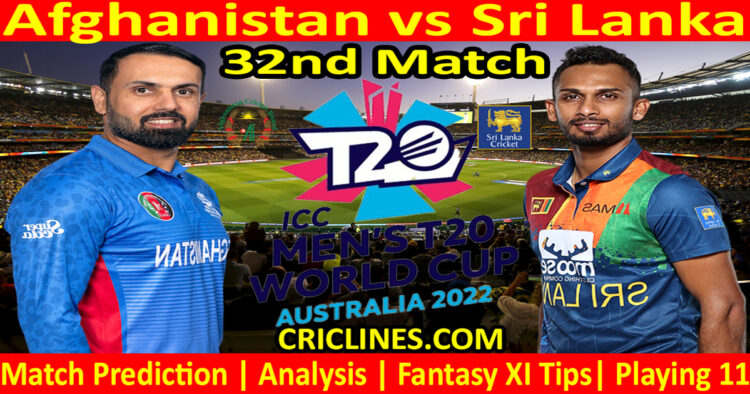 The world is ready to witness yet another big battle of World Cup T20. The 32nd match of World Cup T20 2022 is scheduled to play between Afghanistan and Sri Lanka on Tuesday, 1st November 2022 at The Gabba, Brisbane. We are posting a safe, accurate, and secure today match prediction of the ICC T20 World Cup 2022.

The points table situation of Super 12 Group 1 is very interesting right now. New Zealand is leading the table with five points while England, Ireland, and Australia are equal with three points each. Afghanistan and Sri Lanka are laying at the bottom of the table. Afghanistan had been unlucky in this tournament as two out of three matches were washed out by the rain. They had lost one match and are also poor in net run rate.

Sri Lanka is the other team that failed to give the best performance even after winning the first match of Super 12. They had lost two matches in a row and are laying at the bottom of the Super 12 Group 1 table. They beat Ireland in the first match but were beaten by Australia and New Zealand in their next matches. We don’t think that Sri Lanka can hope to qualify for the semi-finals.

Afghanistan has just one completed match against England while their next matches against New Zealand and Ireland were abandoned without a ball being bowled due to rain even a toss was also not held. The Afghanistan team had not tested much in this tournament. The batting order of Afghanistan is very strong and experienced and is led by Hazratullah Zazai, Rahmanullah Gurbaz, Ibrahim Zadran, Usman Ghani, Najibullah, and the skipper, Mohammad Nabi. Rashid Khan can also bat well in the middle and last overs. They could manage to score just 112 runs and their full team came back to the pavilion in 19.4 overs. Ibrahim Zadran proved the highest run-scorer with 32 runs to his name on the same balls with the help of three boundaries and one huge six. Usman Ghani was the other batter who put some runs on the board. He scored 30 runs and smashed three boundaries during his inning.

Rahmanullah Gurbaz scored 10 runs while Najibullah could manage to score just 13 runs. No other batter from their side could even enter into the double figure. Rashid Khan, Fazalhaq Farooqi, and Mujeeb Ur Rahman failed to open the account on the scoreboard. The bowling unit of Afghanistan is also experienced which is led by Mohammad Nabi, Rashid Khan, Fareed Ahmad Malik, and Fazalhaq Farooqi but they failed to defend a low target on the board and leaked the target of 113 runs in 18.1 overs. Rashid Khan proved the most economical bowler from their side picking one wicket in four against just 17 runs. Mujeeb Ur Rahman also picked one wicket while he was charged with 22 runs in four overs. Fazalhaq Farooqi, Fareed Ahmad Malik, and the skipper, Mohammad Nabi also picked one wicket each while Azmatullah Omarzai was the only bowler from their side who failed to pick any wicket.

Sri Lanka had lost two back-to-back important matches and their most recent defeat came against New Zealand with a huge margin of 65 runs. They lost the toss and were asked to field first. The bowlers of Sri Lanka had a good start and picked three early wickets of New Zealand on a total of just 15 runs but they failed to stop Glenn Phillips from scoring the runs. They leaked a total of 167 runs in 20 overs. Kasun Rajitha was the most successful bowler from their side who picked two wickets in four overs against 23 runs. W Hasaranga was the other bowler who performed well and picked one wicket in four overs while he was charged for 22 runs. M Theekshana, Dhananjaya de Silva, and Lahiru Kumara also picked one wicket each while C Karunaratne remained wicketless.

The batting order of Sri Lanka performed well in qualifier matches but had totally failed in both previous matches. They have some big names in their squad like Pathum Nissanka, Kusal Mendis, Dhananjaya de Silva, Charith Asalanka, and Dasun Shanaka but failed to chase the target of 168 runs and scored 102 runs. Their full team came back to the pavilion in 19.2 overs. Just two batters of Sri Lanka could enter into the double figure. The skipper, Dasun Shanaka was the highest run-scorer from their side with 35 runs to his name on 32 balls with the help of four boundaries and one huge six. Bhanuka Rajapaksa also performed well and scored 32 runs on 22 balls. He smashed three boundaries and two huge sixes during his inning. No other batter from their side could even enter into the double figure. Pathum Nissanka, Kusal Mendis, and Maheesh Theekshana failed to open the account on the scoreboard while Kusal Mendis, Charith Asalanka, Wanindu Hasaranga, and Lahiru Kumara scored just four runs each.

Afghanistan had played three matches against Sri Lanka where they won just one match while Sri Lanka won two matches.

Afghanistan is full of experienced and young players in the t20 format. The batting order of this team is also strong and some well-known hitters of the t20 format are part of the squad of this team, so the winning chances of today’s match for Afghanistan have been increased. The equation of who will win today’s cricket match prediction and who will win the cricket match today is mentioned as under.

The 32nd match of World Cup T20 2022 is going to be held at The Gabba, Brisbane. We had observed in the previous matches played here that the pitch here at this venue is good for batting. The pitch is bouncy and fast and run-scoring is not much easy in early and middle overs. We are hoping that the surface is bound to get slower and be a bit more difficult for batting in this match. A score of 170 is going to be tough to chase.

Mohammad Nabi, Rashid Khan, and Wanindu Hasaranga are key players to watch in this match.