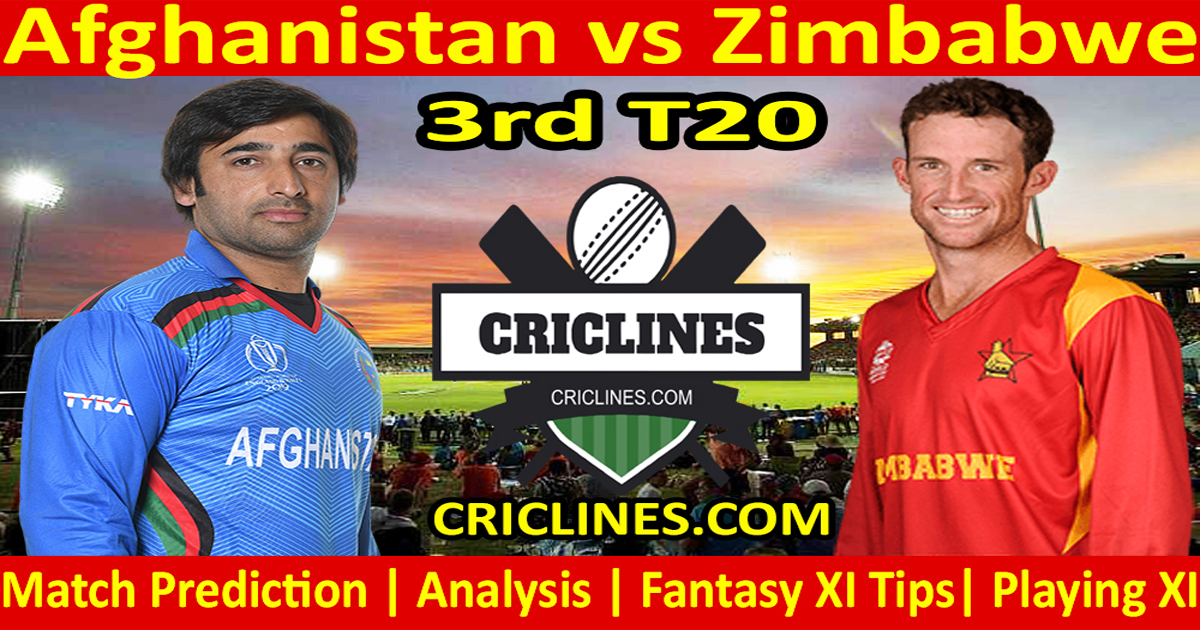 The cricket fans are ready to witness yet another big battle of T20 cricket. The 3rd T20 match of Afghanistan vs Zimbabwe, 2021 is scheduled to be held on Saturday, 20th March 2021 at Sheikh Zayed Stadium, Abu Dhabi. We are providing 100 safe, perfect, and accurate today match prediction for all matches of Afghanistan and Zimbabwe.

Afghanistan had already won this series of three T20s matches and now they have a chance to have a clean sweep against Zimbabwe. They had won the second match with a handsome margin of 45 runs. They won the toss and decided to bat first. The way how their batting order performed in that match was just outstanding. They scored a total of 193 runs in their inning of 20 overs. Almost all batsmen from their side put some runs on the board. Karim Janat was the highest run-scorer from their side who scored 53 runs on 38 deliveries with the help of three boundaries and four sixes. Usman Ghani also had an outstanding performance with the bat in the previous match. He scored 49 runs on 34 balls and smashed five boundaries and two sixes.

Mohammad Nabi was the other batsman from the Afghanistan side who put some runs on the board. He scored 40 runs on just 15 deliveries with the help of two boundaries and four huge sixes. The bowling unit of Afghanistan also performed well in the previous match. They defended the target of 194 runs and send the all-team of Zimbabwe back to the pavilion on a total of 148 runs in 17.1 overs. Rashid Khan once again was the highest wicket-taker from their side who picked three wickets in his three overs bowled out against 30 runs. Mohammad Nabi and Naveen-ul-Haq picked two wickets each while Amir Hamza, Fareed Malik, and Karim Janat picked one wicket each.

Zimbabwe had totally failed to give the best performance during this series against Afghanistan. They had lost both t20 matches played earlier and also had lost the series. They were beaten by Afghanistan in the second t20 match by the margin of 45 runs. Their bowling unit almost failed to give the best performance in their previous match. They were charged for 193 runs in their inning of 20 overs. Blessing Muzarabani was the highest wicket-taker from their side who picked two wickets in his four overs bowled out while he leaked plenty of runs. He was charged for 44 runs. Richard Ngarava, Donald Tiripano, and Ryan Burl were the bowlers who picked one wicket each in the previous match.

Like the bowling, the batting order of Zimbabwe also performed well in the previous match. They failed to chase the target of 194 runs and were all-out on a total of 148 runs in 17.1 overs. Ryan Burl was the only successful batsman from their side who scored 40 runs on 29 deliveries with the help of one boundary and three sixes. Donald Tiripano scored 24 runs while Tarisai Musakanda could manage to score 22 runs. Sikandar Raza could manage to score just 15 runs.

Afghanistan had played a total of 83 T20 matches so far. They won 57 matches while other teams won 26 matches.

Zimbabwe had played 81 T20 International matches right now with 20 wins to their name while they had lost 61 matches while 8 matches.

Afghanistan had played 11 T20 matches against Zimbabwe where they won 10 matches while Zimbabwe had won just one match.

The 3rd T20 match between Afghanistan and Zimbabwe is going to be played at the Sheikh Zayed Stadium, Abu Dhabi. The pitch at this stadium is excellent for batting. The boundaries at this venue are short and will bring the spinners into play. The pitch will continue to be good for batting throughout the match.

Who Will Win Afghanistan vs Zimbabwe 3rd T20

Who Will Win Afghanistan vs Zimbabwe 3rd T20 Toss-ZIM

Who Will Win Afghanistan vs Zimbabwe 3rd T20 Match-AFG

Dream11 Prediction for Afghanistan vs Zimbabwe. After checking the latest player’s availability, the Dream 11 Team for this match of Afghanistan and Zimbabwe is mentioned under.