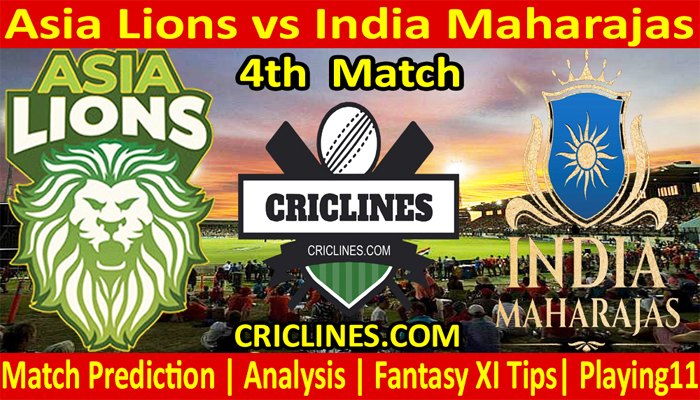 The cricket fans are ready to witness yet another big battle of T20 cricket. The 4th match of Legends League Cricket T20 2022 is scheduled to be held on Monday, 24th January 2022 between Asia Lions and India Maharajas at Al Amerat Cricket Ground (Ministry Turf 1), Al Amerat. We are posting safe, secure, and accurate today match prediction of the Legend Cricket League.

The performance of Asia Lions had been average in this tournament till now. They had played two matches so far with one win and the other lost. They are situated at the second position on the table.

India Maharajas also had performed average in this second edition of Legend Cricket League. They had won just one out of two matches played so far. They had lost one match and are leading the ladder.

Asia Lions are coming to this match on the back of a massive win over World Giants in their most recent match by the margin of six wickets. The performance of their bowling unit was not impressive. They leaked 205 runs in their inning of 20 overs. Kulasekara and Mohammad Hafeez picked two wickets each while C Vaas and Muralitharan picked one wicket each.

Asia Lions won the previous match due to the best performance by their batting order. They chased the target of 206 runs in 19.2 overs. Almost all batsmen from their side put some runs on the board. Upul Tharanga was the most successful and highest run-scorer from their side who scored 63 runs on 43 deliveries with the help of seven boundaries and two huge sixes. Tillakaratne Dilshan also had an outstanding performance with the bat and scored 52 runs.

India Maharajas were beaten by World Giants in their previous match by the margin of three wickets. They lost the toss and were asked to bat first. The performance of their batting order was just outstanding. They scored a total of 209 runs in their 20 overs inning. Naman Ojha was the most successful and highest run-scorer from their side who scored 140 runs on just 69 balls with the help of 15 boundaries and nine huge sixes.

The skipper, Mohammad Kaif also performed well and scored 53 runs. India Maharajas lost the previous match due to the worst performance by their bowling unit. They failed to defend a huge target on the board and leaked the target of 210 runs in 19.3 overs. Stuart Binny was the most successful bowler from their side who picked two wickets in his four overs bowled out against 22 runs. Munaf Patel also picked two wickets while he was charged for 51 runs in his four overs bowled out.

The 4th match of Legends League Cricket 2022 is scheduled to be held at Al Amerat Cricket Ground (Ministry Turf 1), Al Amerat. Pitch here in this stadium is a batting favored and with a little bit of bounce that may help the seamers. Spinners can play a key role on this pitch. A score of near about 290 runs should be as par.