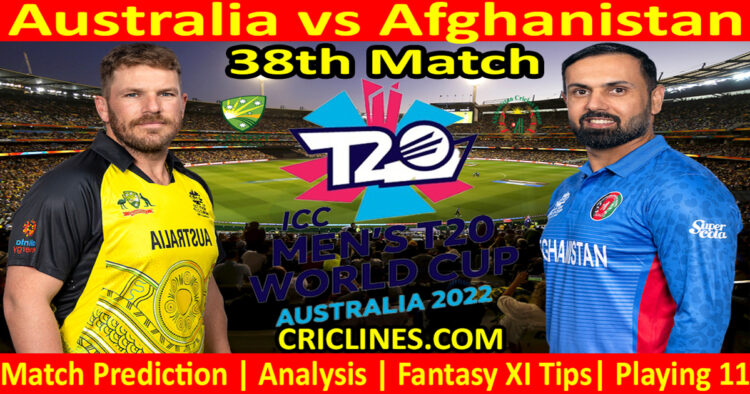 The world is ready to witness yet another big battle of World Cup T20. The 38th match of World Cup T20 2022 is scheduled to play between Australia and Afghanistan on Friday, 4th November 2022 at Adelaide Oval, Adelaide. We are posting safe, accurate, and secure today match prediction of the ICC T20 World Cup 2022.

Australia had played four matches with two wins to their name. They had lost one match while their other match was washed out by the rain and was not decided. Australia is currently in the third position on the points table of Super 12 Group 1. They tied in the points with New Zealand and England. Australia had to win this match by a handsome margin to have some chance to play in the semi-finals. We are sure that Australia will win this match.

Afghanistan had been unlucky as their two important matches were washed out by the rain. They had played four matches and had not won any matches as they lost two matches. They are laying at the bottom of the points table of Super 12 Group 1. Afghanistan had almost no chance to reach the semi-finals. Afghanistan had lost their most recent match against Sri Lanka by a big margin.

Australia is coming to this match on the back of a massive win over Ireland in their most recent match by a handsome margin of 42 runs. They lost the toss and were asked to bat first. The way how their batting order performed in that match was just outstanding. They scored a total of 179 runs in 20 overs. Almost all batters from their side put some runs on the board. The skipper, Aaron Finch was the most successful and highest run-scorer from their side with 63 runs to his name on 44 balls with the help of five boundaries and three huge sixes. Marcus Stoinis was the other batter who performed well in the previous match and scored 35 runs. He faced 25 balls and smashed three boundaries and one huge six. Mitchell Marsh scored 28 runs while Tim David remained not out after scoring 15 runs. David Warner is not performing well in this tournament but we are sure that he will put some runs on the board in this match.

Australia has a strong and experienced bowling unit on the side and they performed well in almost each and every match. They defended the target of 180 runs and send the full team of Australia back to the pavilion in 18.1 overs for a total of 137 runs. Josh Hazlewood, Pat Cummins, Glenn Maxwell, Mitchell Starc, Adam Zampa, and Marcus Stoinis are the leading bowlers of Australia and these all bowlers performed well in the previous match. Adam Zampa was the most successful bowler who picked up two wickets in four overs against just 18 runs. Glenn Maxwell also picked two wickets in 2.1 overs while he was charged with 14 runs. Pat Cummins and Mitchell Starc also picked two wickets each. Mitchell Starc was the most expensive bowler from their side who leaked 43 runs in four overs. Marcus Stoinis picked one wicket in one over against just six runs. Josh Hazlewood failed to pick any wicket and he leaked 24 runs in three overs.

The previous match of Afghanistan against Sri Lanka was the only match where the batting order of Afghanistan was tested. They failed to give the best performance and scored just 144 runs in 20 overs. The batting order of Afghanistan is strong and experienced and they are known as the best batters in the shorter format of cricket but they could not give the best performance. Rahmanullah Gurbaz was the highest run-scorer from their side scoring 28 runs on 24 balls and smashing two boundaries and the same huge sixes. Usman Ghani scored 27 runs and he destroyed 27 balls for this. Ibrahim Zadran scored 22 runs on 18 balls with the help of one boundary and the same huge six. Najibullah scored 18 runs while the skipper, Mohammad Nabi scored 13 runs.

The bowling unit of Afghanistan is also strong and experienced and they have the bowlers like Rashid Khan, Mohammad Nabi, Fazalhaq Farooqi, Mujeeb Ur Rahman, Fareed Ahmad Malik, Azmatullah Omarzai, and Gulbadin Naib. They failed to give the best performance in the previous match and leaked the target of 145 runs in 18.3 overs. Mujeeb Ur Rahman was the only successful bowler from their side with two wickets to his name in four overs against 24 runs. Rashid Khan also picked up two wickets while he was charged with 31 runs in four overs. Gulbadin Naib, Mohammad Nabi, Azmatullah Omarzai, Fareed Ahmad Malik, and Fazalhaq Farooqi were the bowlers who failed to pick any wicket. Afghanistan should put their full strength in this match to have a win to their name in this tournament.

This will be for the first time in the history of T20 cricket that Australia will meet Afghanistan in a T20 match.

Australia is full of experienced and young players of the t20 foramt. The batting order of this team is also strong and some well-known hitters of the t20 format are part of the squad of this team, so the winning chances of today’s match for Australia have been increased. The equation of who will win today’s cricket match prediction and who will win the cricket match today is mentioned as under.

The 38th match of World Cup T20 2022 is going to be held at Adelaide Oval, Adelaide. We had observed in the previous matches played here that the pitch here at this venue is good for batting. The pitch is bouncy and fast and run-scoring is not much easy in early and middle overs. We are hoping that the surface is bound to get slower and be a bit more difficult for batting in this match. A score of 170 is going to be tough to chase.

Who Will Win Australia vs Afghanistan, 38th Match World Cup 2022

Glenn Maxwell, Rashid Khan, and David Warner are key players to watch in this match.

We provided you the above-mentioned today match prediction on the basis of our research, understanding, and analysis. You can consider the point we had provided you with and the final decision will be yours that you have to make.