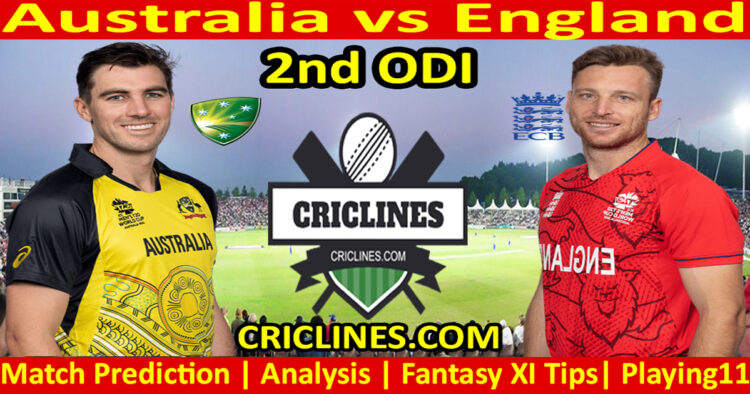 The cricket fans are ready to witness yet another big battle of ODI cricket. The 2nd ODI match of England’s tour of Australia, 2022 is scheduled to be held on Saturday, 19th November 2022 at Sydney Cricket Ground, Sydney. We are providing 100 safe, secure, and accurate today match prediction of Australia and England.

The first ODI match was a high-scoring match where both teams cross the figure of 280 and a key reason for that was that the pitch of Adelaide Oval, Adelaide was much in the favor of the batters. We think that the conditions will not the same in Sydney as this match is going to be held at Sydney Cricket Ground.

England performed well in the first match but they were on the losing side. They lost the toss and were asked to bat first. The way how their batting order performed in the previous match was just outstanding. They scored a total of 287 runs in 50 overs. Dawid Malan was the most successful and highest run-scorer from their side scoring a century. He scored a total of 134 runs on 128 balls with the help of 12 boundaries and four huge sixes. David Willey was the second-highest run-scorer from their side with 34 runs to his name on 40 balls and he smashed three boundaries during his inning. He also remained not out till the 50th over. The skipper, Jos Buttler also performed well and scored 29 runs while Philip Salt and Chris Jordan scored 14 runs each.

England lost the first ODI match due to the worst performance by their bowling unit. They failed to defend the target of 288 runs and leaked this target in 46.5 overs. David Willey was the only successful bowler from their side who picked two wickets in eight overs while he was charged with 51 runs. Liam Dawson also performed well and picked one wicket in 10 overs against 65 runs. Chris Jordan was the other bowler who had a wicket to his name. He picked one wicket while he was charged with 49 runs in seven overs. No other bowler from their side could manage to pick any wicket. Olly Stone, Luke Wood, and Dawid Malan were the bowlers who failed to pick any wicket. Olly Stone was the most economical bowler from their side who was charged for 50 runs in 10 overs. Luke Wood leaked 59 runs in 10 overs while Dawid Malan was charged with 12 runs in 1.5 overs. The batting order of England is performing well and they need to improve their bowling unit to give a tough competition to Australia.

Australia bounced back strongly after a bad performance in T20 World Cup and in the T20 series against England which was played before the World Cup. They won the toss and decided to field first. The performance of their bowling unit was not much impressive. They leaked 287 runs in 50 overs. They used six bowlers in the previous match and no bowler from their side could stop the batting order England from scoring the runs. Adam Zampa was the most successful bowler from their side who picked three wickets in 10 overs against 55 runs. The skipper, Pat Cummins also performed well and picked three wickets in four overs while he was charged with 62 runs in ten overs. Mitchell Starc picked up one wicket in 10 overs against 45 runs. Marcus Stoinis was the other bowler with a wicket to his name. He picked up one wicket in three overs against 23 runs. Chris Green and Ashton Agar were the bowlers who failed to pick any wicket in the previous match.

The way how the batting order of Australia performed in the previous match was just outstanding and that was the main reason why they won the match against the champions of ODI and T20 cricket. They chased the target of 288 runs in 46.5 overs and almost each and every batter from their side put some runs on the board. The opening pair of Australia David Warner and Travis Head performed well and provided an opening start of 147 runs for the partnership of the first wicket. David Warner was the most successful and highest run-scorer from their side scoring 86 runs on 84 balls with the help of 10 boundaries and one huge six. Steven Smith also had an outstanding performance with the bat and scored 80 runs. He faced 78 balls and smashed nine boundaries and one huge six. He remained not out till the chase of the target. Travis Head was the other batter who put some big runs on the board. He scored 69 runs while he faced 57 balls and smashed ten boundaries and one huge six. Alex Carey scored 21 runs while Cameron Green remained not out after scoring 20 runs.

Australia had played a total of 974 ODI matches so far. They won 590 matches while other teams won 341 matches. Their 34 matches came with no result while 9 matches were tied.

England had played 772 ODI International matches right now with 390 wins to their name. They had lost 344 matches while their 30 matches were not decided and 8 matches were tied.

Australia had played 153 ODI matches against England where they won 85 while England had also won 63 matches. 3 matches between these two teams were not decided while 2 matches were tied.

The 2nd ODI match between Australia and England is going to be played at Sydney Cricket Ground, Sydney. The pitch at this stadium is excellent for batting. The boundaries at this venue are short and will bring the spinners into play. The pitch will continue to be good for batting throughout the match. A total of 180 can be a good total to defend.

The weather forecast in Sydney on match day is not very good for a cricket match. There are some chances of rain but that is possible that we may have an interrupted match.

Who Will Win Australia vs England 2nd ODI

Who Will Win Australia vs England 2nd ODI Match-AUS

The above-mentioned match prediction of Australia vs England is based on our research, understanding, and analysis. You can consider the point we had provided you with and finally, the decision will be yours that you have to make.