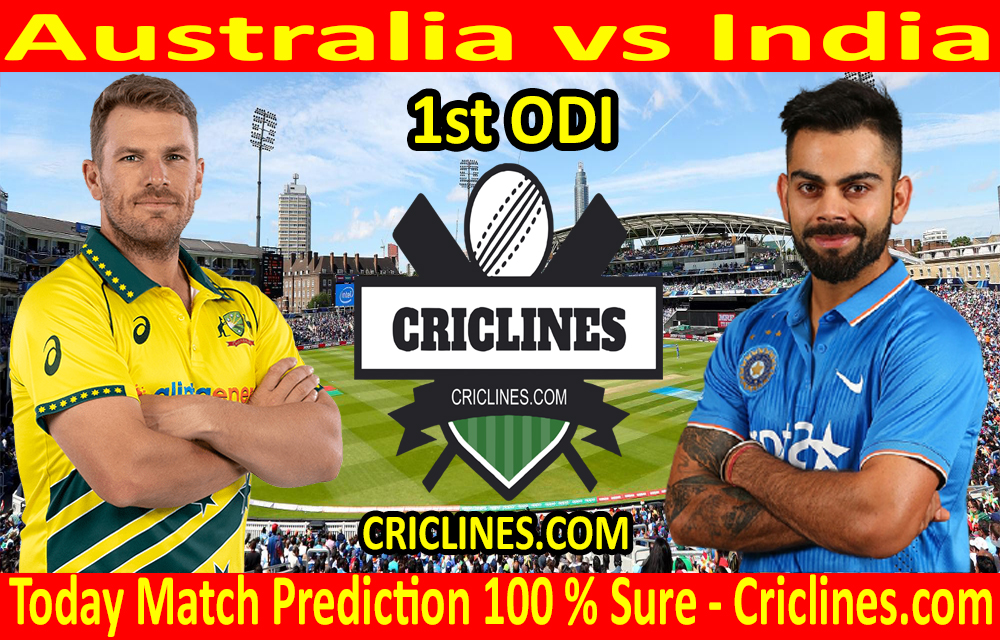 The cricket fans are ready to witness yet another big battle of the ODI cricket. The 1st ODI match of the India tour of Australia is scheduled to be held on Friday, 27th November 2020 at Sydney Cricket Ground, Sydney. We are posting safe, secure, and accurate today match prediction of all matches of India and Australia.

Australia played the last ODI series against England where they won two out of three ODIs and they will have some confidence after this achievement. Every one of us knows that Australia has a strong batting order on the side. They have the big names of batters like Marcus Stoinis, Marnus Labuschagne, Alex Carey, Glenn Maxwell, David Warner, and Aaron Finch available for the first ODI.

Team Australia is very rich when it comes to bowling. Josh Hazelwood, Pat Cummins, and Mitchel Starc will be taking the responsibility of the bowling department with Adam Zampa. Mitchell Marsh will not the part of the final playing eleven for the first ODI and Cameron Green can replace him.

There is no doubt that India is a strong team when it comes to ODI cricket. Rohit Sharma is not part of the squad for this match and we don’t think that it will affect the batting order of India very much. We are expecting that Shikhar Dhawan will open the batting inning for India with Mayank Aggarwal in this match. Virat Kohli, Shreyas Iyer, KL Rahul, and Hardik Pandya are the key batters for India.

India has a strong bowling unit on the side. Jasprit Bumrah had performed well in the Indian Premier League and will continue his good form in this tour of Australia. Mohammad Shami is also in good form these days while Yuzvendra Chahal had also performed well recently.

Australia had played a total of 953 ODI matches where they won 577 and Opposing teams won 333 matches. Their 34 matches ended with no result and 9 matches were tied.

Australia had faced India in 140 ODI matches where Australia won 78 matches and India had won 52 matches while 10 matches between these two teams were ended without any result.

The 1st match of this series and scheduled to be held at Sydney Cricket Ground, Sydney. Pitch here in this stadium is a batting favored and with a little bit of bounce that may help the seamers. Spinners can play a key role in this pitch. A score of near about 280 runs should be as a par.

Who Will Win Australia vs India 1st ODI

Who Will Win Australia vs India 1st ODI Toss-AUS

Who Will Win Australia vs India 1st ODI Match-AUS