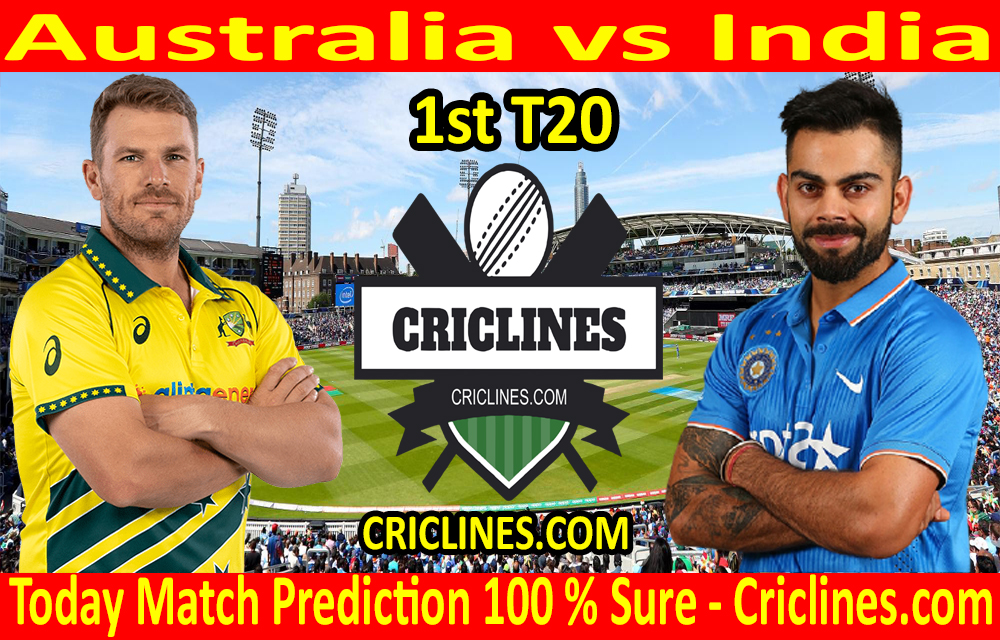 The cricket fans are ready to witness yet another big battle of the T20 cricket. The 1st T20 match of the India tour of Australia is scheduled to be held on Friday, 4th December 2020 at Manuka Oval, Canberra. We are posting safe, secure, and accurate today match prediction of all matches of India and Australia.

Australia had won the ODI series against India with 2-1 and now they are going to face India in the series of three T20s. It was the batting order who performed well in that series for both teams. Favid Warner is part of the final playing XI of Australia for the first T20 match. Who is going to open the batting inning for Australia with Aaron Finch, this question is still answerable. We think that Matthew Wade is the player that will get this opportunity. We had seen his performance in this Big Bash League and we know that he is a hard hitter.

Darcy Short is another player who can get the opportunity of opening the batting inning while Steve Smith who had scored back-to-back centuries in the ODI series, takes his one-down position. Remember that Steve Smith had struggled in the recent IPL T20 edition. Alex Carey, Moises Henriques, and Glenn Maxwell should be taking responsibility at the middle order while Andrew Tye, Mitchell Starc, Cameron Green, and Sean Abbott will handle the bowling department.

India had played the last T20 series against New Zealand where they had a clean sweep against New Zealand. This is for sure that Shikhar Dhawan and KL Rahul will be opening the batting inning of India. We think that Mayank Aggarwal will not the part of the final playing XI for the first T20. Shreyas Iyer and Virat Kohli will take the third and fourth position in the batting. Manish Pandey had a chance to play this match against Australia. Sanju Samson had performed well in the recent season of the Indian Premier League and he will also have a chance during this t20 series.

Hardik Pandya and Ravindra Jadeja are very good batsmen to play in the last overs. Like the batting, India also has options when it comes to the bowling department. Yuzvendra Chahal, Deepak Chahar, T Natrajan, and Jasprit Bumrah are almost final for the first T20. Navdeep Saini and Mohammad Shami had failed to give their best performance in the ODI series but it is possible that they have a chance during this T20 series.

Australia had played a total of 128 T20 matches where they won 68 and Opposing teams won 57 matches. Their 3 matches ended with no result.

India had played 134 T20 matches. They won 86 matches while opposing teams won 44 matches. Their 4 matches ended with no result.

Australia had faced India in 20 T20 matches where Australia won 8 matches and India had won 11 matches while 1 match between these two teams was ended without any result.

The 1st match of this series and scheduled to be held at Manuka Oval, Canberra. Pitch here in this stadium is a batting favored and with a little bit of bounce that may help the seamers. Spinners can play a key role in this pitch. A score of near about 280 runs should be as a par.

Who Will Win Australia vs India 1st T20

Who Will Win Australia vs India 1st T20 Toss-AUS

Who Will Win Australia vs India 1st T20 Match-IND