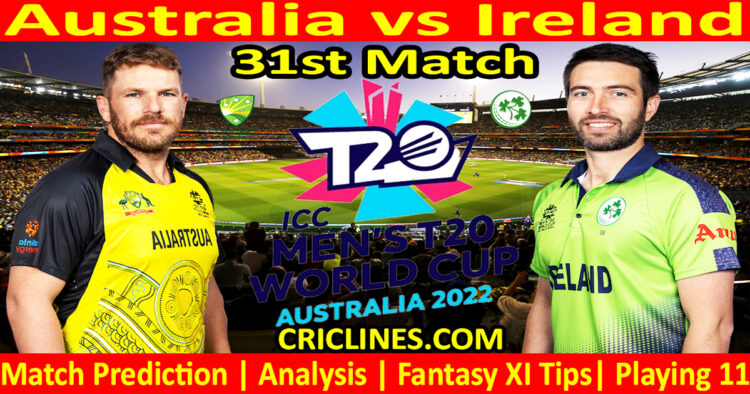 Cricket fans are ready to witness yet another big battle of the World Cup T20. The 31st match of World Cup T20 2022 is scheduled to play between Australia and Ireland on Monday, 31st October 2022 at The Gabba, Brisbane. We are posting safe, accurate, and secure today match prediction of the ICC T20 World Cup 2022.

The defending champions, Australia is in big trouble in this tournament. They had played two matches with one and the other lost while their most recent match against England was abandoned without a ball being bowled due to rain (no toss). Right Now they are in the fourth position in Super 12 Group 1. They had two matches left and had won both matches by a big margin to maintain the net run rate which is very poor right now.

Ireland is the other team that played three matches. They were beaten by Sri Lanka in the first match but they had a massive upset against England and won their match even though it was rain affected. Their next match against Afghanistan was washed out by the rain. They are in the third position right now due to a good net run rate than Australia. They are going to face two big teams of T20 cricket New Zealand and Australia.

The most recent match of Australia against England was washed out by the rain and earlier, they beat Sri Lanka with a handsome margin of seven wickets. They won the toss and decided to field first. The performance of their bowling unit was good where they leaked 157 runs in 20 overs. They used seven bowlers in that match. Remember that Adam Zampa was not part of the playing eleven against Sri Lanka. He is fit now and will join the playing eleven for this match. Mitchell Starc was the most successful bowler from their side with one wicket to his name in four overs against just 23 runs. Gleen Maxwell picked one wicket in just one over against five runs. Josh Hazlewood, Pat Cummins, and Ashton Agar also picked one wicket each while Marcus Stoinis was the only bowler from their side who remained wicketless.

Australia had a slow batting start while chasing the target of 158 runs. David Warner failed to put some big runs on the board and scored just 11 runs. Mitchell Marsh was another batter who could not give the best performance. He scored 17 runs. Glenn Maxwell started hitting but could not convert his total into a big one. He scored 23 runs on just 12 balls with the help of two boundaries and the same huge sixes. Aaron Finch scored 31 runs while he faced 42 runs and failed to smash any boundary. He had one six to his name. Marcus Stoinis changed the momentum of the game totally in the favor of Australia. He played the main role to win this match. He smashed the inning of 59 runs on just 18 balls. He hit four boundaries and six huge sixes during his inning. He also remained not out till the chase of the target. We think that Australia will come to this match with full force as Ireland is a weak team and Australia will try to not only win the match but also improve the net run rate.

Ireland beat England in an interesting match before their previous match against Afghanistan was abandoned without a ball being bowled due to rain even though no toss was held. Ireland was lucky in the match against England where the rain came in and as a result, they were the winners of the game. They lost the toss and were asked to bat first. The performance of their batting order was not much impressive. They could manage to score 157 runs and their full team came back to the pavilion in 19.2 overs. The skipper, Andrew Balbirnie was the most successful and highest run-scorer from their side scoring 62 runs on 47 balls with the help of five boundaries and two huge sixes. Lorcan Tucker also performed well and scored 34 runs on 27 balls and smashed three boundaries and one huge six.

Harry Tector, Paul Stirling, Curtis Campher, and George Dockrell have experienced batters but they failed to put some big runs on the board. The bowling unit of Ireland performed well in the early overs. This was a key reason why they won the match. They leaked 105 runs and picked five wickets in 14.3 overs when the match was stopped due to rain. Joshua Little was the most successful and highest wicket-taker from their side who picked two wickets in three overs against just 16 runs. Barry McCarthy, Fionn Hand, and George Dockrell picked one wicket each while Gareth Delany and Mark Adair were the bowlers who failed to pick any wicket. Ireland is not a strong team than Australia and will have to fight. They need to be the best in each and every department of the game against Australia.

Australia had played just one match against Ireland back in 2012 which they won with a margin of seven wickets.

Australia is full of experienced and young players in the t20 format. The batting order of this team is also strong and some well-known hitters of the t20 format are part of the squad of this team, so the winning chances of today’s match for Australia have been increased. The equation of who will win today’s cricket match prediction and who will win the cricket match today is mentioned as under.

The 31st match of World Cup T20 2022 is going to be held at The Gabba, Brisbane. We had observed in the previous matches played here that the pitch here at this venue is good for batting. The pitch is bouncy and fast and run-scoring is not much easy in early and middle overs. We are hoping that the surface is bound to get slower and be a bit more difficult for batting in this match. A score of 170 is going to be tough to chase.

Who Will Win Australia vs Ireland, 31st Match World Cup 2022

David Warner, Gleen Maxwell, and Andrew Balbirnie are key players to watch in this match.