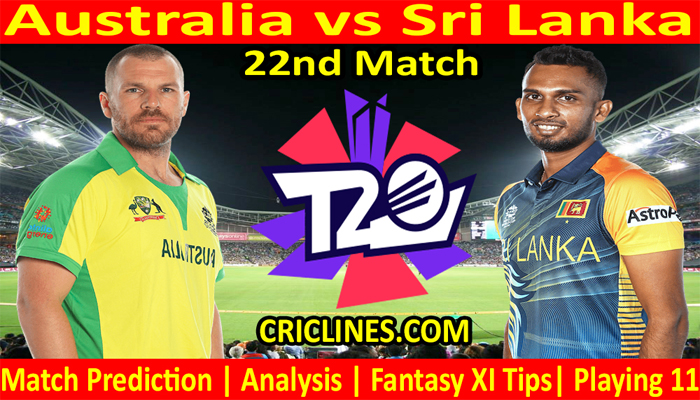 The world is ready to witness yet another big battle of World Cup T20. The 22nd Match of World Cup T20 2021 is scheduled to play between Australia and Sri Lanka on Thursday, 28th October 2021 at Dubai International Cricket Stadium, Dubai. We are posting safe, accurate, and secure today match prediction of ICC T20 World Cup free.

Australia had a good start to their campaign of ICC T20 World Cup 2021 and had won their opening match against South Africa with a handsome margin of five wickets. It was not an easy match to win but they managed to win it. Sri Lanka had won their 1st Super 12 stage match against Bangladesh and this was their fourth win in a row.

The bowling department of Australia gave an outstanding performance in their first match against South Africa where they leaked just 118 runs in their inning of 20 overs. Almost all bowlers from their side performed well and picked wickets. Adam Zampa was the most successful bowler from their side who picked two wickets in his four overs bowled out against 21 runs. Josh Hazlewood and Mitchell Starc also picked two wickets each while Glenn Maxwell and Pat Cummins picked one wicket each.

The batting order of Australia failed to give the performance as many of us were expecting but in the end, they managed to chase the target of 119 runs in 19.4 overs. Steven Smith was the most successful and highest run-scorer from their side who scored 35 runs with the help of three boundaries. Marcus Stoinis remained not out after scoring 24 runs. He faced 16 balls and smashed three boundaries during his inning. Matthew Wade scored 15 runs while David Warner had 14 runs to his name.

Sri Lanka had got the momentum after having a lot of poor performances in a couple of years. They beat Bangladesh in their previous match with a handsome margin of five wickets. The bowling unit of this team totally failed to give the best performance. They leaked 171 runs in their inning of 20 overs. Chamika Karunaratne, Binura Fernando, and Lahiru Kumara picked one wicket each while Dushmantha Chameera, Charith Asalanka, Wanindu Hasaranga, and Dasun Shanaka were the bowlers who failed to pick any wicket.

Sri Lanka won the previous match due to the best performance by their batting order. They chased the target of 172 runs in 18.5 overs. Charith Asalanka was the most successful and highest run-scorer from their side who scored 80 runs on just 49 balls with the help of five boundaries and the same huge sixes. He remained not out till the chase of the target. Bhanuka Rajapaksa was the other batsman from Sri Lanka who had an outstanding performance with the bat. He scored 53 runs. He faced 31 deliveries with and smashed three boundaries and the same huge sixes during his inning.

Australia had played 16 matches against Sri Lanka where they had won 8 while Sri Lanka also had won eight matches.

Charith Asalanka, Steven Smith, and Adam Zampa are key players to watch in this match.

The 22nd Match of World Cup T20 2021 is going to be held at Dubai International Cricket Stadium, Dubai. We had observed in the previous matches played here that the pitch here at this venue is good for batting. The track is slower than the others we have seen and helps the spinners quite a bit. We are hoping that the surface is bound to get slower and be a bit more difficult for batting in this match. A score of 170 is going to be tough to chase.

Who Will Win Australia vs Sri Lanka, 22nd Match WTC 21