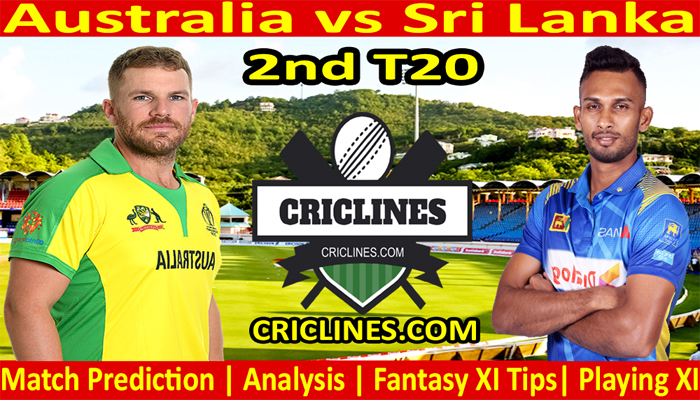 The cricket fans are ready to witness yet another big battle of T20 cricket. The 2nd T20 match of the Sri Lanka tour of Australia, 2022 is scheduled to be held on Sunday, 13th February 2022 at Sydney Cricket Ground, Sydney. We are providing 100 safe, perfect, and accurate today match predictions for all matches of Australia and Sri Lanka.

The first match of this series was decided through the DLS method which the home side won with a margin of 20 runs. It was a close match which no one of us expected. Sri Lanka proved that they can give tough time to the home side, Australia.

Australia had given rest to its important players in this series and now they are facing issues in this home series. Their batting order struggled in the first match against the spin bowling unit of Sri Lanka. Ben McDermott is opening the batting inning of Australia in this series and he was the highest run-scorer in the opening match. He is in superb form as he was in the recent edition of Big Bash League. The big names of the batting order of Australia failed to put some runs on the board.

Aaron Finch, Glenn Maxwell, Steve Smith, and Matthew Wade failed to score some big runs in the first match of this five matches series. Marcus Stoinis has a decent record on this venue and we are sure that he will play a key role in this match. Adam Zampa, Josh Hazelwood, Pat Cummins, and Mitchell Starc have to give the best performance to restrict the batting order of Sri Lanka on a low total.

Sri Lanka fought well in the opening match but they were 20 runs short in the end. W Hasaranga was the most successful bowler from their side who picked three wickets in his four overs bowled out against 38 runs. Chameera, B Fernando, and C Karunaratne picked two wickets each while M Theekshana and the skipper, Dasun Shanaka were the bowlers who failed to pick any wicket.

The batting order of Sri Lanka failed to chase the target of 149 runs and scored 122 runs in 19 overs. Pathum Nissanka was the highest run-scorer from their side who scored 36 runs with the help of five boundaries and one huge six. Dinesh Chandimal remained not out after scoring 25 runs. He faced 16 balls and smashed three boundaries and one six. Charith Asalanka had 16 runs to his name.

Australia had played a total of 154 T20 matches so far. They won 80 matches while other teams won 71 matches. 3 matches of Australia were ended with no result.

Sri Lanka had played 149 T20 International matches right now with 68 wins to their name while they had lost 79 matches and their two matches were ended with no result.

Australia had played 18 T20 matches against Sri Lanka where they won 10 matches while Sri Lanka had won 8 matches.

The 2nd T20 match between Australia and Sri Lanka is going to be played at the Sydney Cricket Ground, Sydney. The pitch at this stadium is excellent for batting. The boundaries at this venue are short and will bring the spinners into play. The pitch will continue to be good for batting throughout the match.

The weather forecast in Sydney on match day is not very good. There are some chances of rain but that is possible that we may have an interrupted match.

Who Will Win Australia vs Sri Lanka 2nd T20

Who Will Win Australia vs Sri Lanka 2nd T20 Toss-AUS

Who Will Win Australia vs Sri Lanka 2nd T20 Match-AUS

Dream11 Prediction for Australia vs Sri Lanka. After checking the latest player’s availability, the Dream 11 Team for this match of Australia and Sri Lanka is mentioned under.

We had provided you with the above-mentioned today cricket prediction on the basis of our research, understanding, and analysis. You can consider the point we had provided you and in the end, the final decision will be yours.