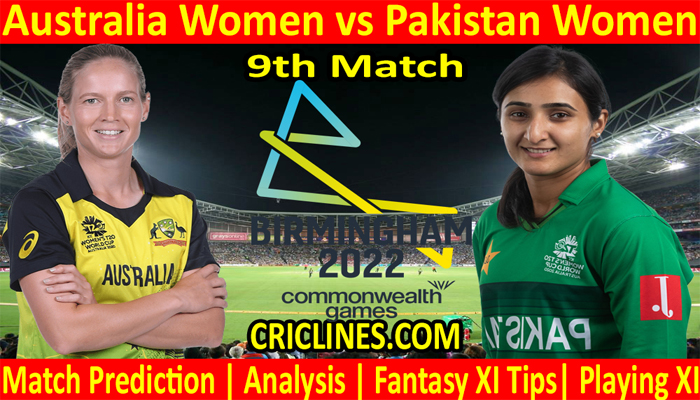 The world is ready to witness yet another big battle of The 100 League. The 9th Match of Commonwealth Games Women’s Cricket Competition 2022 is scheduled to play between Australia Women and Pakistan Women on Wednesday, 3rd August 2022 at Edgbaston, Birmingham. We are posting safe, accurate, and secure today match prediction for all matches of the Commonwealth Games Women’s Cricket Competition free.

Australia Women had been just outstanding in this first edition of the Commonwealth Games Women’s Cricket Competition. They had won both matches played so far and their chances to move to the next level of this tournament are very bright. On the other side, Pakistan Women had not been good in this tournament. They were beaten by Barbados in the first match and lost the second match against India.

Australia Women are coming to this match on the back of a massive win over Barbados Women in their previous match with a huge margin of nine wickets. The bowling department of Australia was just superb in the most recent match. They leaked just 64 runs in 20 overs. Schutt, Darcie Brown, Jonassen, Alana King, Tahlia McGrath, and Gardner had been just superb in this tournament. Alana King was the most successful bowler in the previous match with four wickets to her name in four overs against just eight runs.

Tahlia McGrath was the other bowler who was just good with the ball. She picked three wickets in her four overs while she was charged for just 13 runs. Gardner picked two wickets while Darcie Brown had one wicket to her name. The batting order of Australia also had been outstanding in this tournament. They chased the target of 65 runs in only 8.1 overs. The skipper, Meg Lanning was the highest run-scorer who remained not out after scoring 34 runs on 21 balls with the help of five boundaries and two huge sixes. Alyssa Healy also performed well with the bat and scored 23 runs. She smashed four boundaries during her inning.

Pakistan Women’s cricket team had not been impressive in recent times. They had lost the most series they played. They also had not won any match in this first event of the Commonwealth Games Women’s Cricket Competition. They were beaten by India in the most recent match by the margin of eight wickets. That was a rain-affected match which was reduced to 18 overs per side. The batting order of Pakistan totally collapsed in the previous match and scored just 99 runs in 18 overs. Muneeba Ali was the only successful batter from the side of Pakistan who scored 32 runs on 30 balls with the help of three boundaries and one huge six.

Bismah Maroof scored 17 runs while Aliya Riaz had 18 runs to her name. Omaima Sohail and Ayesha Naseem scored 10 runs each. The bowling department of Pakistan also failed to give the best performance. They leaked 102 runs in 11.4 overs while defending the target of 100 runs. Diana Baig, Anam Amin, Fatima Sana, Tuba Hassan, and Omaima Sohail are the key bowlers of Pakistan and no bowler had been good. Omaima Sohail and Tuba Hassan picked one wicket each while no other bowler from their side could manage to pick any wicket.

Australia Women is full of experienced and young players of the t20 foramt. The batting order of this team is also strong and some well-known hitters of the t20 format are part of the squad of this team, so the winning chances of today match for Australia Women have been increased. The equation of who will win today’s cricket match prediction and who will win the cricket match today is mentioned as under.

The toss will play an important role in the decision of all matches of the Commonwealth Games Women’s Cricket Competition 2022. Having a good total on the board is always a big advantage in this kind of big match. According to toss prediction, the team who will win the toss may choose to bat first.

The 9th Match match of the Commonwealth Games Women’s Cricket Competition 2022 is going to be held at Edgbaston, Birmingham. We had observed in the previous matches played here that the pitch here at this venue is good for batting. The track is slower than the others we have seen and helps the spinners quite a bit. We are hoping that the surface is bound to get slower and be a bit more difficult for batting in this match. A score of 185 is going to be tough to chase.