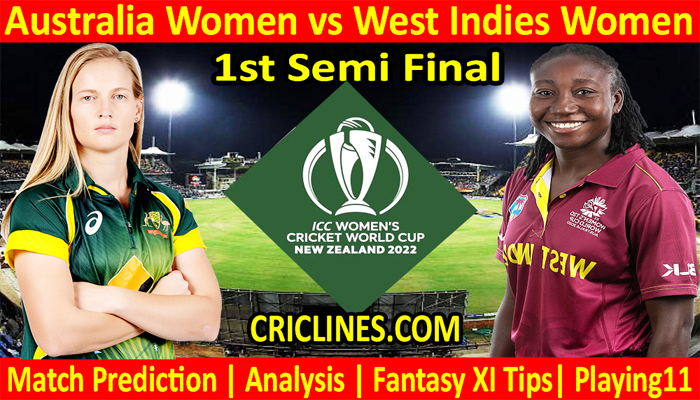 The cricket fans are ready to witness yet another big battle of Women’s ODI cricket. The 1st Semi-Final match of Women’s World Cup 2022 is scheduled to play between Australia Women and West Indies Women on Wednesday, 30th March 2022 at Basin Reserve, Wellington. We are posting safe, accurate, and secure today match prediction of the world cup free.

Australia Women had been the un-stoppable team in this big event of cricket. They had won all seven matches played at the league stage and are leading the points table as they had not lost any match. On the other side, West Indies Women could win just three out of seven matches played. They lost three matches while their one match was ended with no result. They are situated at the fourth spot on the table.

Australia Women had won their last league stage match against Bangladesh Women with a margin of five wickets. That was a rain-affected match which was reduced to 43 over per side. They won the toss and decided to field first. The performance of their bowling unit was good. They leaked 135 runs in their inning of 43 overs. Jonassen and Gardner picked two wickets each while Schutt and Sutherland had one wicket each to their names.

The batting order of Australia Women also performed well and chased the target of 136 runs in 32.1 overs. Almost all batters from their side put some runs on the board. Beth Mooney was the most successful and highest run-scorer from their side who remained not out after scoring 66 runs. She faced 75 balls and smashed five boundaries during her inning. Annabel Sutherland scored 25 runs while Alyssa Healy could manage to score 13 runs.

The previous match of West Indies Women against South Africa Women was ended with no result. Earlier, they lost their most recent completed match against Pakistan Women by the margin of eight wickets. That was a rain-affected match which was reduced to 20 overs per side. They lost the toss and were asked to bat first. The performance of their batting order was very poor. They could manage to score 89 runs in their inning of 20 overs. Dottin was the most successful and highest run-scorer from their side who scored 27 runs.

S Taylor scored 18 runs while Afy Fletcher remained not out after scoring 12 runs. No other batter from their side could even enter into a double-figure. The bowling unit of West Indies also failed to perform well. They leaked the target of 90 runs in 18.5 overs. Shakera Selman and Afy Fletcher picked one wicket each while Hayley Matthews, Chinelle Henry, Anisa Mohammed, and Deandra Dottin were the bowlers who failed to pick any wicket.

The toss is playing an important role in the decision of all matches of ICC Women’s ODI World Cup 2022. According to toss prediction, the team who will win the toss may choose to bat first.

The 1st Semi-Final match of the Women’s ODI World Cup 2022 will be played at Basin Reserve, Wellington. The pitch here at this stadium has something in it for both batsmen and bowlers. It is typically a little slow and low but very flat. The pace bowlers have very little to work with and it is the slower bowlers that will be the bigger threat.

The weather forecast in Wellington is predicting some chances of rain during the matchday but hopefully, it should clear up by the time the match gets started.

Check out the Dream11 lineup for the 1st Semi-Final Women’s ODI World Cup match to be played between Australia Women vs West Indies Women.