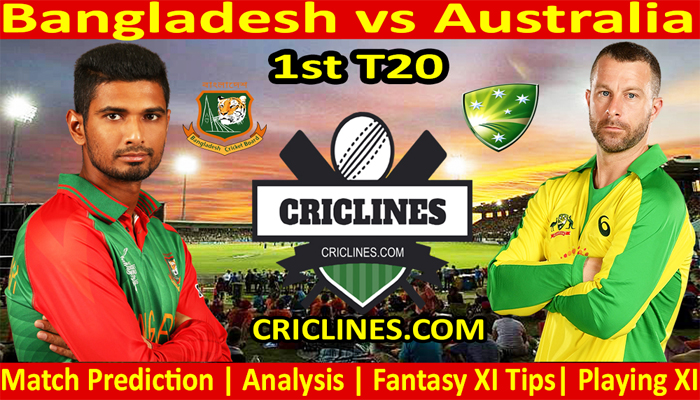 The cricket fans are ready to witness yet another big battle of T20 cricket. The 1st T20 match of Australia tour of Bangladesh, 2021 is scheduled to be held on Tuesday, 3rd August 2021 at Shere Bangla National Stadium, Dhaka. We are providing 100 safe, perfect, and accurate today match prediction for all matches of Bangladesh and Australia.

Bangladesh is going to host Australia for the five T20 matches and this is like a golden spirituality for Bangal Tigers to get the best combination for World Cup coming in next months.

The key players of Bangladesh like Liton Das and Tamim Iqbal will be missing from this home series against Australia. This will be a huge lose the Bangladesh but we think that Soumya Sarkar and Mohammad Naim will fill the place of the two experienced players. Both players had been good in the white shorter format of cricket and we are sure that they will perform well in this home series against Australia. Mushifur Rahim, Mahmudulah, Soumya Sarkar, and Shakib Al Hasan will have a lot of responsibilities to handle the batting order.

Australia will be playing the series of five T20 matches against Bangladesh without their star players. Matthew Wade had been appointed as the new captain and this series will be a test case for him. The batting order of Australia is not what we had seen in the previous series. In our opinion, Ben McDermott and Josh Philippe will be opening the batting for Australia.

Alex Carey, Matthew Wade, Mitchell Marsh, and Moises Henriques will be handling the middle batting order. Mitchell Marsh was just outstanding in the recent T20 series against West Indies where he scored 219 runs including three fifties. Alex Carey is the other batsman who can score runs in the conditions like Bangladesh. Adam Zampa, Ashton Agar, and Mitchell Swepson will be leading the bowling department of Australia.

Bangladesh had played a total of 102 T20 matches so far. They won 34 matches while other teams won 66 matches. Two matches of Bangladesh were ended with no result.

Australia had played 141 T20 matches right now with 72 wins to their name. They had lost 66 matches while 3 matches were ended with no result.

The 1st T20 match between Bangladesh and Australia is going to be played at Shere Bangla National Stadium, Dhaka. The pitch at this stadium is excellent for batting. The boundaries at this venue are short and will bring the spinners into play. The pitch will continue to be good for batting throughout the match.

Who Will Win Bangladesh vs Australia 1st T20

Who Will Win Bangladesh vs Australia 1st T20 Toss-BAN

Who Will Win Bangladesh vs Australia 1st T20 Match-AUS