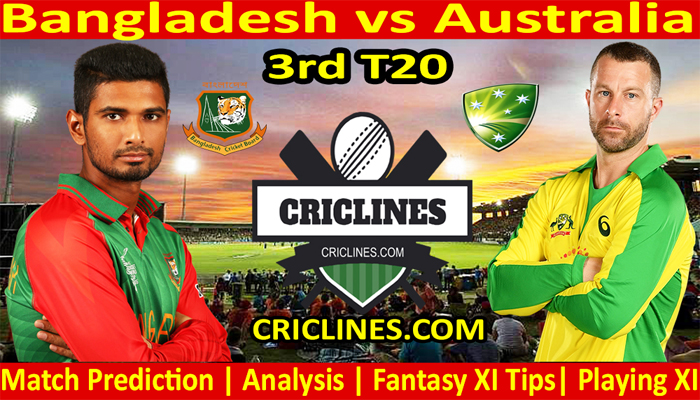 The world is ready to witness yet another big battle of T20 cricket. The 3rd T20 match of the Australia tour of Bangladesh, 2021 is scheduled to be held on Friday, 6th August 2021 at Shere Bangla National Stadium, Dhaka. We are providing 100 safe, perfect, and accurate today match prediction for all matches of Bangladesh and Australia.

Bangladesh lost the toss and in the second match and was asked to field first once again. The way how the bowling department of Bangladesh performed in the previous match was just outstanding. They leaked 121 runs in their inning of 20 overs. Mustafizur picked three wickets while Shoriful Islam had two wickets to his name. Mahedi Hasan and Shakib picked one wicket each in the previous match.

Like the bowling, the batting order of Bangladesh also performed well in the previous match and chased the target of 122 runs in 18.4 overs. Afif Hossain was the highest run-scorer with 37 runs to his name. He remained not out till the chase of the target. Shakib Al Hasan scored 26 runs while Mahedi Hasan scored 23 runs and Nurul Hasan remained not out after scoring 22 runs.

Australia was the favorite team before the start of this series but they had totally failed to give the best performance and now it is very difficult for them to save the series. The batting order of Australia once again failed to put a big total on the board and they scored just 121 runs in their inning of 20 overs. Mitchell Marsh was the highest run-scorer from their side who smashed the inning of 45 runs with the help of five boundaries.

Henriques scored 30 runs while Starc remained not out after scoring 13 runs. The bowling department of Australia performed well but they failed to defend a low target on the board. They leaked the target of 122 runs in 18.4 overs. Mitchell Starc, Josh Hazlewood, Ashton Agar, Adam Zampa, and Andrew Tye picked one wicket each.

Bangladesh had played a total of 104 T20 matches so far. They won 36 matches while other teams won 66 matches. Two matches of Bangladesh were ended with no result.

Australia had played 143 T20 matches right now with 72 wins to their name. They had lost 68 matches while 3 matches were ended with no result.

The 3rd T20 match between Bangladesh and Australia is going to be played at Shere Bangla National Stadium, Dhaka. The pitch at this stadium is excellent for batting. The boundaries at this venue are short and will bring the spinners into play. The pitch will continue to be good for batting throughout the match.

Who Will Win Bangladesh vs Australia 3rd T20

Who Will Win Bangladesh vs Australia 3rd T20 Toss-BAN

Who Will Win Bangladesh vs Australia 3rd T20 Match-BAN