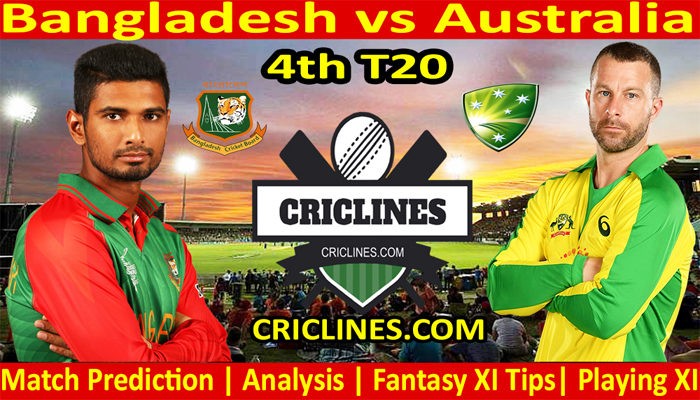 The cricket fans are ready to witness yet another big battle of T20 cricket. The 4th T20 match of Australia tour of Bangladesh, 2021 is scheduled to be held on Saturday, 7th August 2021 at Shere Bangla National Stadium, Dhaka. We are providing 100 safe, perfect, and accurate today match prediction for all matches of Bangladesh and Australia.

Finally, Bangladesh had won a T20 series against Australia for the first time in their history of white-ball cricket. The bowling department of Bangladesh has been just amazing in this series. They had defended the totals of less than 140 runs in almost all three matches that they had won. We think that the idea of Australia cricket team management to send their B team to this tour of Bangladesh was not good and they had paid off for that bad decision.

Bangladesh had won the all three matches played earlier and also the series and now, they are in a good position to have a whitewash against Australia. They won the toss and decided to bat first in the previous match. The performance of their batting order was not impressive as they could manage to score just 127 runs in their 20 overs inning. The skipper, Mahmudullah was the most successful and highest run-scorer who scored 52 runs with the help of four boundaries.

Once again, the bowling unit of Bangladesh gave the best performance and defended the target of 128 runs. They leaked 117 runs in their inning of 20 overs. Shoriful Islam was the most successful and highest wicket-taker from their side who picked two wickets in his four overs bowled out against 29 runs. Nasum Ahmed and Shakib Al Hasan picked one wicket each while Mahedi Hasan, Mustafizur Rahman, and Soumya Sarkar were the bowlers who failed to pick any wicket.

Australia had totally failed to give the best performance in this tour of Bangladesh. They had lost the series of five T20 matches and now have a threat of whitewash. The bowling unit of Australia had been outstanding in this series and also in the most recent match where they leaked 127 runs in their inning of 20 overs. Nathan Ellis was the highest wicket-taker with three wickets to his name. Josh Hazlewood and Adam Zampa picked two wickets each.

The batting order of Australia had failed to chase a low target on the board in almost all previously played matches. They failed to chase the target of 128 runs in the previous match and scored just 117 runs in their inning of 20 overs. Mitchell Marsh was the highest run-scorer from their side who scored 51 runs on 47 deliveries with the help of one huge six and six boundaries. Ben McDermott scored 35 runs while Alex Carey remained not out after scoring 20 runs.

Bangladesh had played a total of 105 T20 matches so far. They won 37 matches while other teams won 66 matches. Two matches of Bangladesh were ended with no result.

Australia had played 144 T20 matches right now with 72 wins to their name. They had lost 69 matches while 3 matches were ended with no result.

The 4th T20 match between Bangladesh and Australia is going to be played at Shere Bangla National Stadium, Dhaka. The pitch at this stadium is excellent for batting. The boundaries at this venue are short and will bring the spinners into play. The pitch will continue to be good for batting throughout the match.

Who Will Win Bangladesh vs Australia 4th T20

Who Will Win Bangladesh vs Australia 4th T20 Toss-BAN

Who Will Win Bangladesh vs Australia 4th T20 Match-AUS