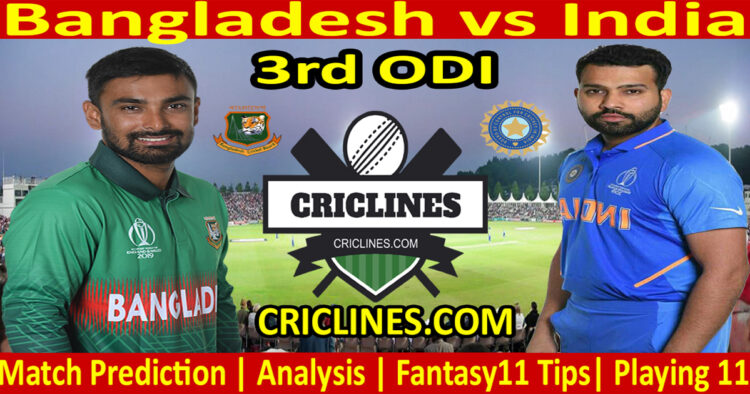 The world is ready to witness yet another big battle of ODI cricket. The 3rd ODI match of India’s tour of Bangladesh, 2022 is scheduled to be held on Saturday, 10th December 2022 at Zahur Ahmed Chowdhury Stadium, Chattogram. We are posting 100 safe, perfect, and accurate today match prediction for all matches of Bangladesh and India.

Indian disappointed its fans across the world in this ODI series. They played well but were on the losing side. Now they had lost the series and now have a clear chance of being whitewashed by Bangladesh. Bangladesh had been just outstanding in this home series against India. They had won the series of three ODI matches and now have a golden chance to clean-sweep India for the first time in their cricket history. Now this series is shifting from Shere Bangla National Stadium, Dhaka to Zahur Ahmed Chowdhury Stadium, Chattogram where the playing conditions are very different.

Bangladesh had given a kind of performance that no one of us was expecting. They had been just outstanding in the previous matches and had won both matches. They won the toss and decided to bat first in the previous match. The performance of their batting order performed well and scored 271 runs in 50 overs. Mehidy Hasan Miraz was the most successful and highest run-scorer from their side who remained not out after scoring a century. He scored a total of 100 runs on 83 balls with the help of eight boundaries and four huge sixes. Mahmudullah was the other batsman who put some runs on the board. He scored 77 runs while he faced 96 balls and smashed seven boundaries during his inning. No other batsmen from their side could manage to put some big runs on the board.

Najmul Hossain Shanto scored 21 runs while Nasum Ahmed remained not out after scoring 18 runs. The performance of the bowling unit of Bangladesh was not much impressive but they defended the target of 272 runs and leaked 266 runs in 50 overs. Ebadot Hossain was the most successful and highest wicket-taker from their side with three wickets to his name in 10 overs against 45 runs. Shakib Al Hasan also had an outstanding performance with the ball. He picked two wickets while he was charged for just 39 runs in 10 overs. Mehidy Hasan Miraz also picked one wicket but he leaked plenty of runs. He was charged with 46 runs in just 6.1 overs. Mustafizur Rahman and Mahmudullah picked one wicket each while Nasum Ahmed was the only bowler who failed to pick any wicket in the previous match. Bangladesh had done well in the previous matches and if they continue this performance, they can win this match if they can do this, this will happen for the first time in their cricket history that they had a whitewash against India.

The fans of team India were not expecting this kind of performance by team India. They played a good game in the second ODI match but were on the losing side. They were asked to field first after losing the toss. The performance of their bowling unit was not very good. They leaked 271 runs in 50 overs. They used six bowlers in the previous match and Washington Sundar was the only successful bowler from their side. He picked up three wickets in 10 overs while he was charged for just 37 runs. Umran Malik was given a chance in the previous match and he also performed well. He picked up two wickets in 10 overs while he leaked 58 runs. Mohammad Siraj also picked two wickets but he leaked a lot of runs. He was charged with 73 runs in ten overs.

Deepak Chahar, Shardul Thakur, and Axar Patel were the bowlers who failed to pick any wicket in the previous match. The batting order of team India performed well but failed to chase the target of 272 runs and scored 266 runs in 50 overs. Shikhar Dhawan and Virat Kohli came to open the batting inning for India and failed to provide a good opening start. These both batsmen came back to the pavilion on a total of just 13 runs. Shreyas Iyer, Axar Patel, and Rohit Sharma performed well in the previous match. Shreyas Iyer was the most successful and highest run-scorer from their side with 82 runs to his name. He faced 102 balls and smashed six boundaries and three huge sixes. Axar Patel also had an outstanding performance in the previous match. He scored 56 runs on the same balls with the help of two boundaries and three huge sixes. The skipper, Rohit Sharma also had an outstanding performance with the bat and scored 51 on just 28 balls and he smashed three boundaries and five huge sixes.

Bangladesh had played a total of 402 ODI matches where they won 146 matches and opposing teams won 249 matches. Their 7 matches ended with no result.

India had played a total of 1019 ODI matches so far. They won 531 while other teams won 436 matches. 43 matches of India ended with no result and 9 matches were tied.

Bangladesh had played 38 ODI matches against India where they won just six matches and India won 30 matches. Just one match between India and Bangladesh was tied.

The 3rd ODI match of India’s tour of Bangladesh is going to be held at Zahur Ahmed Chowdhury Stadium, Chattogram. The pitch at this stadium is excellent for batting. The boundaries at this venue are short and will bring the spinners into play. The pitch will continue to be good for batting throughout the match. The pitch on this venue is good for batting. It also has a bit of help for the spin bowlers. As per the live cricket score, a total of 170 runs should be a par score.

The weather forecast in Chattogram on match day is good. There are almost no chances of rain and we may have a full match to watch.

Who Will Win Today Bangladesh vs India 3rd ODI Match

Dream11 Prediction for Bangladesh vs India. After checking the latest player’s availability, the Dream 11 Team for this match of Bangladesh and India is mentioned under.