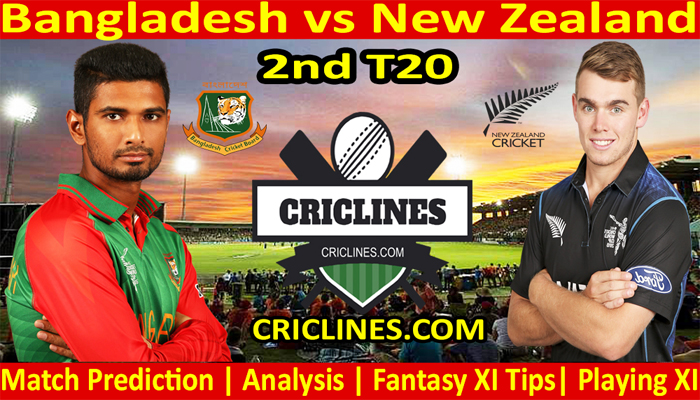 The world is ready to witness yet another big battle of T20 cricket. The 2nd T20 match of the New Zealand tour of Bangladesh, 2021 is scheduled to be held on Friday, 3rd September 2021 at Shere Bangla National Stadium, Dhaka. We are providing 100 safe, perfect, and accurate today match predictions for all matches of Bangladesh and New Zealand.

Bangladesh had a kick start to this home series against New Zealand and had won the 1st match of 5 T20 matches series. It was shocking to see that one of the strongest batting orders of T20 cricket was bowled out on just 60 runs. The wicket was also much difficult for run-scoring.

The bowling department of Bangladesh destroyed the batting order of New Zealand after losing the toss and were asked to field first. Almost all bowlers from their side give the best performance and picked wickets. Mustafizur was the highest wicket-taker from their side who picked three wickets in his 2.5 overs bowled out against 13 runs. Saifuddin, Shakib Al Hasan, Nasum Ahmed picked two wickets each while Mahedi Hasan picked one wicket.

The opening batting pair of Bangladesh failed to have a good start but later, the middle batting order performed well and chased the target of 62 runs in 15 overs. Shakib Al Hasan was the highest run-scorer from their side with 25 runs on his name. He faced 33 deliveries and smashed two boundaries. Mushfiqur Rahim scored 16 runs while the skipper, Mahmudullah had 14 runs to his name.

The batting order of New Zealand almost collapsed in the 1st T20 on a tricky wicket. They failed to understand the behavior of the wicket and we saw the result. Henry Nicholls and the skipper, Latham scored 18 runs each. No other batsmen from their side could even enter into a double-figure. Rachin Ravindra and McConchie failed to open the account on the scoreboard.

The bowling department of New Zealand starts well and picked two wickets early on the total of just 7 runs but they failed to pick wickets on regular basis and leaked the target of 61 runs in 15 overs. Ajaz Patel, Cole McConchie, and Rachin Ravindra picked one wicket each while Jacob Duffy, Doug Bracewell, and Blair Tickner were the bowlers who failed to pick any wicket.

Bangladesh had played a total of 108 T20 matches so far. They won 39 matches while other teams won 67 matches. Two matches of Bangladesh were ended with no result.

New Zealand had played 146 T20 matches right now with 72 wins to their name. They had lost 70 matches while their four matches were ended with no result.

The 2nd T20 match between Bangladesh and New Zealand is going to be played at Shere Bangla National Stadium, Dhaka. The pitch at this stadium is excellent for batting. The boundaries at this venue are short and will bring the spinners into play. The pitch will continue to be good for batting throughout the match.

Who Will Win Bangladesh vs New Zealand 2nd T20

Who Will Win Bangladesh vs New Zealand 2nd T20 Toss-BAN

Who Will Win Bangladesh vs New Zealand 2nd T20 Match-BAN