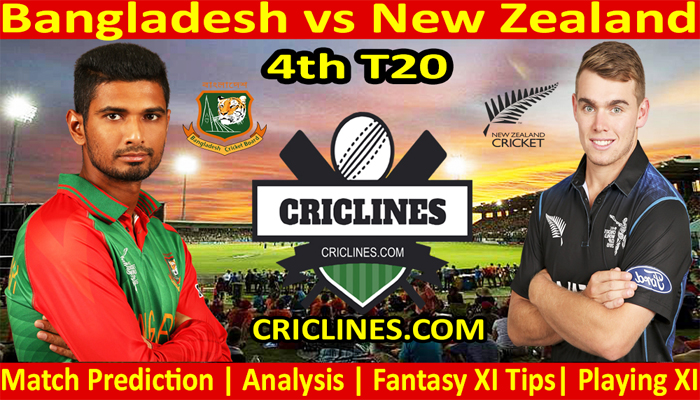 The world is ready to witness yet another big battle of T20 cricket. The 4th T20 match of the New Zealand tour of Bangladesh, 2021 is scheduled to be held on Wednesday, 8th September 2021 at Shere Bangla National Stadium, Dhaka. We are providing 100 safe, perfect, and accurate today match predictions for all matches of Bangladesh and New Zealand.

New Zealand fight back and won the third T20 match against Bangladesh. They have a chance to level the series and we are sure that they will do that. They had won the previous match and will be full of confidence. Bangladesh still has a chance to win the series if they could manage to win just one out of the next two matches.

Bangladesh failed to give the best performance in the 3rd T20 match and was outclassed in each and every department of the game. They lost the toss and were asked to field first. The performance of their bowling unit was average on a tricky pitch. They leaked 128 runs in their inning of 20 overs. Saifuddin picked two wickets while Mahedi Hasan, Mustafizur, and the skipper, Mahmudullah picked one wicket each.

The batting order of Bangladesh almost collapsed in the previous match. They failed to chase the target of 129 runs and were all-out on the total of just 76 runs in 19.4 overs. Mushfiqur Rahim was the highest run-scorer from their side who remained not out after scoring 20 runs. Liton Das scored 15 runs while Mohammad Naim could manage to score 15 runs.

New Zealand bounced back strongly after losing two matches in a row and won the 3rd match with a handsome margin of 52 runs. The performance of their batting order was not impressive. They could manage to score 128 runs in their 20 overs inning. Henry Nicholls was the highest run-scorer from their side who remained not out after scoring 36 runs with the help of three boundaries. Tom Blundell scored 30 runs in the previous match.

Will Young and Rachin Ravindra scored 20 runs each while Finn Allen could manage to score 15 runs. New Zealand won the previous match due to the best performance by their bowling unit. They defended a low target of 129 runs and send the all team of Bangladesh back to the pavilion on a total of 76 runs. Ajaz Patel was the most successful and highest wicket-taker from their side who picked four wickets in his four overs bowled out against 16 runs. Cole McConchie picked three wickets while Rachin Ravindra, Scott Kuggeleijn, and Colin de Grandhomme picked one wicket each in the previous match.

Bangladesh had played a total of 110 T20 matches so far. They won 40 matches while other teams won 68 matches. Two matches of Bangladesh were ended with no result.

New Zealand had played 148 T20 matches right now with 73 wins to their name. They had lost 71 matches while their four matches were ended with no result.

The 4th T20 match between Bangladesh and New Zealand is going to be played at Shere Bangla National Stadium, Dhaka. The pitch at this stadium is excellent for batting. The boundaries at this venue are short and will bring the spinners into play. The pitch will continue to be good for batting throughout the match.

Who Will Win Bangladesh vs New Zealand 4th T20

Who Will Win Bangladesh vs New Zealand 4th T20 Toss-NZ

Who Will Win Bangladesh vs New Zealand 4th T20 Match-BAN