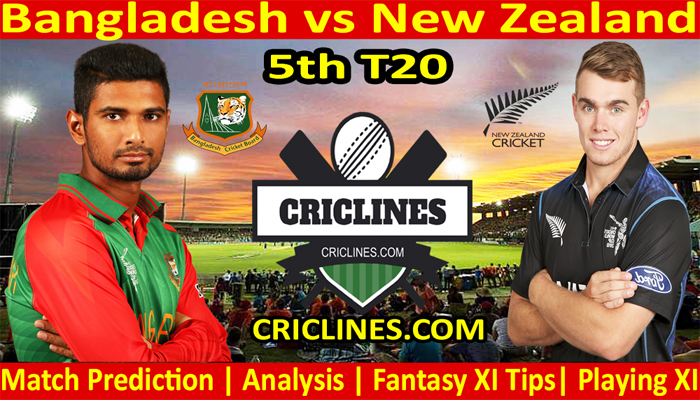 The cricket fans are ready to witness yet another big battle of T20 cricket. The 5th T20 match of the New Zealand tour of Bangladesh, 2021 is scheduled to be held on Friday, 10th September 2021 at Shere Bangla National Stadium, Dhaka. We are providing 100 safe, perfect, and accurate today match predictions for all matches of Bangladesh and New Zealand.

Bangladesh had won a T20 series against New Zealand for the first time in their history. This series win will help Bangladesh a lot in the upcoming T20 World Cup. New Zealand must be disappointed with their performance in this series and we are sure that they will give a chance to their bench players to test the squad for their next tour of Pakistan.

Bangladesh had already won this series of five T20 matches with 3-1. The way how the bowling department of Bangladesh performed in the 4th T20 match was just outstanding. They almost destroyed the batting order of New Zealand. They send all teams of New Zealand back to the pavilion on a total of just 93 runs in 19.3 overs. Nasum Ahmed was the most successful bowler from their side who picked four wickets in his four overs bowled out against just 10 runs.

Mustafizur Rahman also picked four wickets while he was charged for 12 runs in his 3.3 overs bowled out. Mahedi Hasan and Mohammad Saifuddin picked one wicket each. The batting order of Bangladesh also performed well and chased the target of 94 runs in 19.1 overs. The skipper, Mahmudullah was the most successful and highest run-scorer from their side who remained not out after scoring 43 runs. Mohammad Naim scored 29 runs while Mushfiqur Rahim failed to open his account on the scoreboard.

New Zealand failed to give the best performance as many of us were expecting. They had lost the T20 series against Bangladesh for the first time in their cricketing history. The batting order of New Zealand almost collapsed in the previous match. Their all team came back to the pavilion with a total score of just 93 runs in 19.3 overs. Will Young was the most successful and highest run-scorer from their side who scored 46 runs while the skipper, Tom Latham could manage to score 21 runs.

The bowling unit of New Zealand fight well in the previous match but they failed to defend a low target on the board. They leaked the target of 94 runs in 19.1 overs. Ajaz Patel was the most successful and highest wicket-taker from their side who picked two wickets in his four overs bowled out against just nine runs. Cole McConchie picked one wicket while Hamish Bennett, Rachin Ravindra, Colin de Grandhomme, and Blair Tickner were the bowlers who failed to pick any wicket in the 4th T20 match.

Bangladesh had played a total of 111 T20 matches so far. They won 41 matches while other teams won 68 matches. Two matches of Bangladesh were ended with no result.

New Zealand had played 149 T20 matches right now with 73 wins to their name. They had lost 72 matches while their four matches were ended with no result.

The 5th T20 match between Bangladesh and New Zealand is going to be played at Shere Bangla National Stadium, Dhaka. The pitch at this stadium is excellent for batting. The boundaries at this venue are short and will bring the spinners into play. The pitch will continue to be good for batting throughout the match.

Who Will Win Bangladesh vs New Zealand 5th T20

Who Will Win Bangladesh vs New Zealand 5th T20 Toss-NZ

Who Will Win Bangladesh vs New Zealand 5th T20 Match-NZ