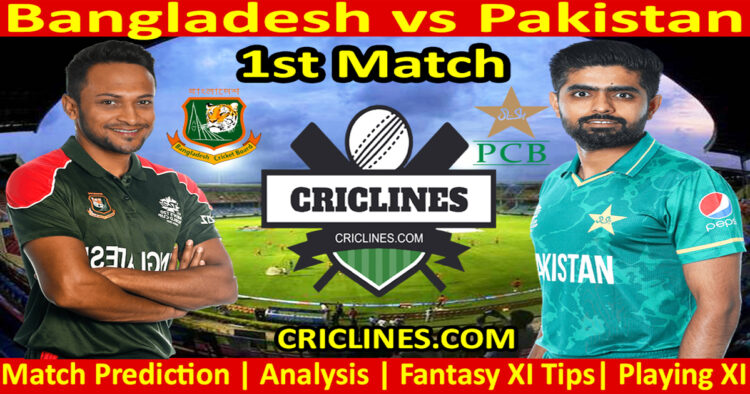 The cricket fans are ready to witness a big battle of T20 cricket. The 1st T20 match of the New Zealand T20I Tri-Series 2022 is scheduled to play on Friday, 7th October 2022 at Hagley Oval, Christchurch. We are posting a safe, perfect, secure, and accurate today match prediction of the Pakistan tour of Bangladesh, in 2022.

New Zealand, Pakistan, and Bangladesh are going to play a tri-series of six T20 matches right before the start of the World Cup. This series is very important for almost all teams to get the best players for the World Cup. The conditions in New Zealand are almost the same as in Australia and this is a big opportunity for these teams to get some awareness of the conditions. We think almost all teams will play with their full strength in this series and almost all matches of this series will be very interesting.

The most recent event for the Bangladesh team was Asia Cup where they were the worst performing team and failed to get a place in the super four teams. They were beaten by Afghanistan and Sri Lanka in group matches. The conditions in New Zealand are very different and it may take some time for the players of Bangladesh to adjust to the conditions. This is a big opportunity for Bangladesh to get some kind of winning momentum from this series to the World Cup.

Pakistan had been much busy in 2022. They had played a series of seven T20 matches against England in their home conditions where they lost the series by 3-4 and earlier, they played in the Asia Cup where they reached the final but were beaten by Sri Lanka in the final match. Pakistan had reached New Zealand with the same squad as the World Cup. They were not good in the home conditions against England and it will be interesting to see how they perform in New Zealand.

Bangladesh had made some major changes in the team after a disappointing performance in Asia Cup. Shakib Al Hasan had been appointed as a new captain of Bangladesh in place of Mahmudullah. Shakib is an experienced player and had played 101 T20 matches for Bangladesh. He was also part of CPL 2022 where they played the main role in each and every win for this team. He had played a lot of cricket in the conditions of New Zealand and Australia and we are sure that he will try to lead his team in a professional way. The batting order of Bangladesh is not much strong at least on papers. Sabbir Rahman, Yasir Ali, and Najmul Hossain Shanto are the leading batters of Bangladesh for this series.

Liton Das and Nurul Hasan are wicket-keeper batters in the squad of Bangladesh while Afif Hossain and Mosaddek Hossain are batting all-rounders who will be part of the final playing eleven of Bangladesh for this match. The bowling unit of Bangladesh is also weak when we compare it with Pakistan and New Zealand. Mustafizur Rahman, Taskin Ahmed, Ebadot Hossain, Hasan Mahmud, and Nasum Ahmed are leading bowlers of Bangladesh. Mehidy Hasan Miraz and Mohammad Saifuddin are also available for the selection of this match.

Pakistan had played a T20 series recently against England where they were not much impressive. They were lucky as they won two very close matches but their performance was not good. The middle batting order of Pakistan had disappointed its fans in Pakistan and around the world. There are many other things that are under discussion these days. Babar Azam and Mohammad Rizwan are opening the batting inning for Pakistan. These both players are not genuine openers even though they had been good and had provided a good start but their strike rate had been a big issue. These both batters destroy a lot of opening overs and pressure comes to the middle and lower batting order. Khushdil Shah, Iftikhar Ahmad, Haidar Ali, and Shan Masood had not been impressive in the recent matches.

Babar Azam and Mohammad Rizwan are in good form but they have to provide a good opening start with a good strike rate otherwise, the results will be the same as their home series against England. The middle batting order of Pakistan also needs to prove itself. Pakistan’s team is rich in the bowling department. Shaheen Shah Afridi had been named for this series but we are not sure that he is fit and will play this match. Mohammad Hasnain was not good against England and he will be also tested in this series. Naseem Shah is the other bowler who is part of the team. He was facing some injury issues during the home series and did not get a single match to play. Mohammad Nawaz and Shadab Khan are the two best spin bowlers in the world and also have a lot of experience of playing in the conditions of New Zealand and Australia. These both players can also bat well in the middle overs.

Pakistan had played 15 T20 matches against Bangladesh where they had won 13 while Bangladesh had won just 2 matches.

The 1st match of the New Zealand T20I Tri-Series 2022 will be played at Hagley Oval, Christchurch. The pitch at this stadium is good for batting but is one of the slower pitches in New Zealand. Run-scoring is not going to be very easy and that could actually be a good thing for both teams. A total of 170 runs can be a par score

The weather forecast for Christchurch on match day is not very good. Rain is predicted for most of the day and so it looks like we are going to struggle to get a game in.

Dream11 Prediction for Bangladesh vs Pakistan-Bangladesh Tri-Series 2019-1st T20. After checking the latest player’s availability, which players will be part of both teams, and the possible tactics that the two teams might use as we had learned from the previous series to make the best possible Dream11 team.

We will update you right before the start of the match.

We had provided you the above-mentioned today prediction on the basis of our research, understanding, and analysis. You can consider the point we had provided you and finally, the decision will be yours that you have to make at your own risk.