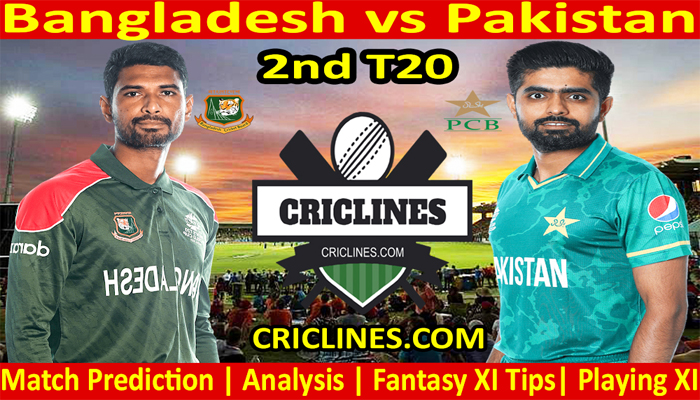 The cricket fans are ready to witness yet another big battle of T20 cricket. The 2nd T20 match of the Pakistan tour of Bangladesh, 2021 is scheduled to be held on Saturday, 20th November 2021 at Shere Bangla National Stadium, Dhaka. We are providing 100 safe, perfect, and accurate today match predictions of Bangladesh and Pakistan.

Bangladesh could not change its losing continuity had now they had lost seven T20 matches in a row. They were in a winning situation at one time but their bowlers destroyed their dreams of winning the 1st match. Now they have to win next to both matches to win the series. On the other side, Pakistan had a good start to this tour of Bangladesh and won the opening match after some thrills.

The batting order of Bangladesh once again failed to put a big total to defend. They could manage to score just 127 runs in their inning of 20 overs. At one stage, they lost their key three wickets on the total of just 15 runs but Afif Hossain and Nurul Hasan took the charge and scored a bit of handsome total. Afif Hossain was the highest run-scorer from their side with 36 runs to his name. He faced 34 deliveries and smashed two boundaries and the same huge sixes. Mahedi Hasan remained not out after scoring 30 runs.

Nurul Hasan scored 28 runs while no other batsmen from the Bangladesh side could even enter into a double-figure. The performance of the bowling unit of Bangladesh was good till the 18th over and they put team Pakistan under pressure but in the end, they failed to defend the target of 128 runs and leaked this target in 19.2 overs. Taskin Ahmed was the highest wicket-taker from their side who picked two wickets in his four overs bowled out against 31 runs. Mahedi Hasan, Mustafizur Rahman, and Shoriful Islam picked one wicket each.

Pakistan was just outstanding with the ball in the 1st match of this three T20 matches series against Bangladesh. They leaked 127 runs in their inning of 20 overs. Hasan Ali, who was not in good form in ICC T20 World Cup, was the highest wicket-taker from their side who picked three wickets in his four overs bowled out against just 22 runs. Mohammad Wasim Jr also performed well with the ball and picked two wickets in his four overs while he was charged for 24 runs. Mohammad Nawaz and Shadab Khan picked one wicket each while Haris Rauf failed to pick any wicket.

The top batting order of Pakistan totally collapsed in the previous match. They lost their key four wickets of Mohammad Rizwan, Babar Azam, Haidar Ali, and Shoaib Malik on the total of just 24 runs but Fakhar Zaman and Khushdil Shah took the charge in the middle and last overs and make the chase of 128 runs possible. Khushdil Shah was the most successful batsman with 34 runs to his name. Fakhar Zaman also scored 34 runs while Shadab Khan scored 21 runs on just 10 balls and Mohammad Nawaz scored 18 runs on just eight deliveries.

Bangladesh had played a total of 121 T20 matches so far. They won 43 matches while other teams won 76 matches. Two matches of Bangladesh were ended with no result.

Pakistan had played 184 T20 matches right now with 113 wins to their name. They had lost 66 matches while their five matches were ended with no result.

The 2nd T20 match between Bangladesh and Pakistan is going to be played at Shere Bangla National Stadium, Dhaka. The pitch at this stadium is excellent for batting. The boundaries at this venue are short and will bring the spinners into play. The pitch will continue to be good for batting throughout the match.

Who Will Win Bangladesh vs Pakistan 2nd T20

Who Will Win Bangladesh vs Pakistan 2nd T20 Toss-BAN

Who Will Win Bangladesh vs Pakistan 2nd T20 Match PAK