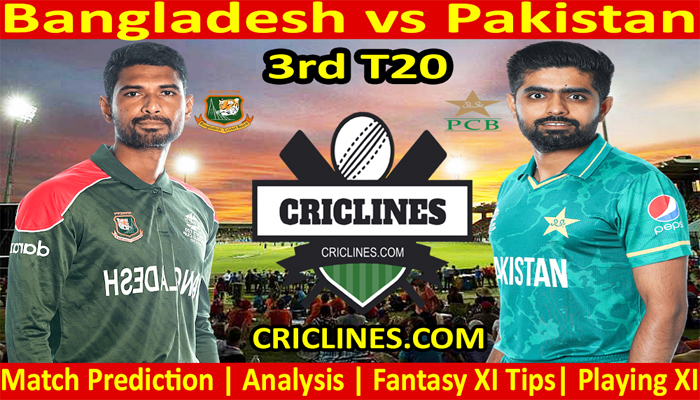 The world is ready to witness yet another big battle of T20 cricket. The 3rd T20 match of the Pakistan tour of Bangladesh, 2021 is scheduled to be held on Monday, 22nd November 2021 at Shere Bangla National Stadium, Dhaka. We are providing 100 safe, perfect, and accurate today match prediction of Bangladesh and Pakistan.

Bangladesh must be disappointed by the performances they had given in recent times. They produce substandard pitches and were good against Australia and England on that kind of pitches but this did not work against Pakistan. They had lost the series earlier and to are near to facing a whitewash. On the other side, Pakistan had been just superb with the bat and ball in this series. They had won the series and now have a golden chance to have a clean sweep against Bangladesh.

The batting order of Bangladesh had totally failed to perform well in the home conditions and that exact we saw in the previous match. They could manage to score just 108 runs in their 20 overs inning. Najmul Hossain Shanto was the most successful and highest run-scorer from their side who scored 40 runs on 34 balls with the help of five boundaries. Afif Hossain scored 20 runs while the skipper, Mahmudullah could manage to score 12 runs.

The bowling unit of Bangladesh also had failed to perform well throughout this series. They were quite well in the 1st match but totally failed in the previous match. They leaked the target of 109 runs in 18.1 overs. Mustafizur Rahman was the most successful bowler who picked one wicket in his 2.1 overs bowled out against 12 runs. Aminul Islam also picked one wicket while he was charged for 30 runs in his four overs bowled out. Mahedi Hasan, Taskin Ahmed, Shoriful Islam, Najmul Hossain Shanto, Afif Hossain, and Saif Hassan were the bowlers who failed to pick any wicket.

Pakistan was put into the field first once again in the previous match. The way their bowling unit performed was just outstanding. They leaked 108 runs in their 20 overs inning. Shaheen Afridi was just outstanding with the ball. He picked two wickets in his four overs bowled out against just 15 runs. Shadab Khan also picked two wickets while he was charged for 22 runs in his four overs bowled out. Mohammad Wasim Jr, Haris Rauf, and Mohammad Nawaz were the bowlers who failed to pick any wicket.

The batting order of Pakistan also performed well in the previous match. They chased the target of 109 runs in 18.1 overs. Fakhar Zaman was the most successful and highest run-scorer from their side who scored 57 runs. He faced 51 deliveries and smashed two boundaries and three huge sixes. He remained not out till the chase of the target. Mohammad Rizwan also performed well and scored 39 runs on 45 deliveries with the help of four boundaries.

Bangladesh had played a total of 122 T20 matches so far. They won 43 matches while other teams won 77 matches. Two matches of Bangladesh were ended with no result.

Pakistan had played 185 T20 matches right now with 114 wins to their name. They had lost 66 matches while their five matches were ended with no result.

The 3rd T20 match between Bangladesh and Pakistan is going to be played at Shere Bangla National Stadium, Dhaka. The pitch at this stadium is excellent for batting. The boundaries at this venue are short and will bring the spinners into play. The pitch will continue to be good for batting throughout the match.

Who Will Win Bangladesh vs Pakistan 3rd T20

Who Will Win Bangladesh vs Pakistan 3rd T20 Toss-PAK

Who Will Win Bangladesh vs Pakistan 3rd T20 Match PAK